Business activity in Egypt grew at its fastest pace in almost six years, buoyed by an uptick in new orders, while Saudi Arabia saw a second month of milder improvements.

In the United Arab Emirates, meanwhile, non-oil private sector activity fell below the threshold of 50 that separates growth from contraction for the first time since August, according to IHS Markit’s Purchasing Managers’ Index. Concerns over further unemployment and renewed lockdowns continued to dog the three major Arab economies. 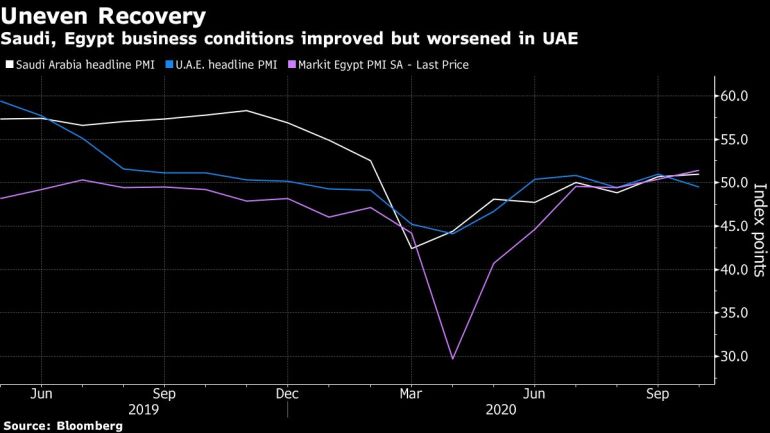 Maintaining the rebound across the three economies will be a challenge as tough new restrictions are imposed around the world to contain Covid-19. For Saudi Arabia, the region’s largest economy, employment numbers dropped at the fastest rate since June and there were “fresh concerns” about the pace of recovery from the virus outbreak, according to IHS Markit.

Confirmed virus cases in the kingdom and Egypt have fallen since their peak in June. On Monday, Egypt’s government said it may be forced to take “difficult decisions” if people continue to ignore safety measures.

Meanwhile, the outlook among UAE businesses for the next 12 months was at a joint-record low — on par with the reading in August — with fears over the persistence of the pandemic hurting future activity. Cases in the Gulf nation have gained momentum over the past month, rising to the highest on record. The UAE has reopened its economy gradually over the past months. “The recovery in demand across the UAE non-oil economy suffered in October,” said David Owen, economist at IHS Markit. “While the decline was mild, it nonetheless showed a stalling of growth momentum after the Covid-19 lockdown.”