Belarusian security forces detained hundreds of protesters at rallies in Minsk the opposition had billed as “the march of neighbours”, local police and a rights group reported.

Thousands of demonstrators met at various locations on Sunday, mostly in remote residential areas of the capital, and marched through the streets demanding the resignation of President Alexander Lukashenko, a witness said.

Belarus has been in crisis since a presidential election in August that the opposition said was rigged, something Lukashenko has denied.

“Neighbour for neighbour against dictatorship,” one protest banner read.

“Go away, rat!” the crowds chanted, referring to Lukashenko, who has run the country for 26 years, relentlessly cracking down on dissent.

She and her supporters refused to recognise the result, saying the vote was riddled with fraud.

On Sunday, police once again deployed tear gas and stun grenades to break up some of the crowds in Minsk, and some were chased into residential courtyards and beaten with truncheons, the Viasna human rights group said.

Before the rally, water cannon, armoured vehicles and police vans were seen in the centre of Minsk.

Several subway stations were closed and internet access was restricted.

On Saturday, Tikhanovskaya, who left the country soon after the election under pressure from the authorities and is currently in exile in Lithuania, extended her support to the protesters.

“I will support everyone who takes part in the Neighbours’ March this Sunday,” Tikhanovskaya said in a video statement.

“We have come a long, hard way together already … We’re a proud, brave, peaceful people that have learned the price of freedom and will never agree to live without it.”

Due to intense crackdowns on anti-government rallies, Lukashenko’s opponents have chosen to change tactics, calling on supporters to create small gatherings in every district of the capital.

According to local media, approximately 20 rallies were recorded on Sunday across the city.

Belarusians are gathering today for the Rally of Neighbors. They are marching around their homes, using the new format of decentralized peaceful protests in #Belarus. This makes more difficult for Lukashenka's thugs to suppress the protests. pic.twitter.com/BO4cgKyO3K

“Large columns of people have assembled in all districts of Minsk, without exception. The Lukashenko police are desperately rushing from district to district,” said opposition Telegram channel Nexta Live that has helped coordinate the continuing demonstrations.

The European Union has slapped sanctions on Lukashenko and a number of his allies for election rigging and a violent crackdown on demonstrators.

Lukashenko, who has the firm backing of Moscow, has refused to step down and instead has suggested reforms to the constitution to placate the opposition. 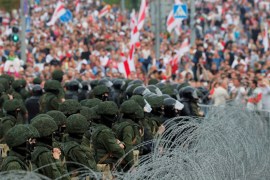 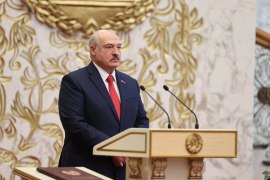 Belarus president, son and 13 officials will be banned from entering EU territory and will have their assets frozen. 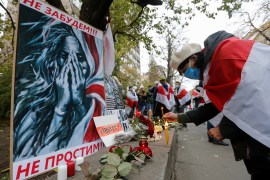 The EU calls Bondarenko’s death ‘outrageous and shameful’, prompting a new round of Western sanctions on Belarus. 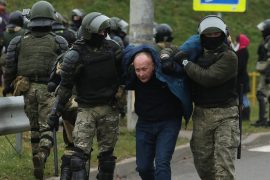