Montenegro and Serbia have expelled one another’s ambassadors in tit-for-tat moves, just before the planned inauguration of a new, pro-Serb government in Podgorica.

The diplomatic spat began on Saturday when Montenegro declared Serbian Ambassador Vladimir Bozovic a persona non grata and expelled him from the country.

The foreign ministry in Podgorica cited “long and continuous meddling in the internal affairs of Montenegro” as the reason for asking Bozovic to leave.

Serbia said a few hours later that it had responded in a “reciprocal manner”, declaring the Montenegrin Ambassador Tarzan Milosevic a persona non grata and expelling him from the country.

The incident adds to already tense relations between the two Balkan states that were part of a joint country before an independence referendum in 2006 led to Montenegro splitting off.

Montenegro remains deeply divided among those seeking closer ties with traditional Orthodox Christian allies Serbia and Russia, and those who view Montenegro as an independent state allied with the West.

Montenegrin President Milo Djukanovic, who headed the country for nearly 30 years without interruption, steered the country away from its traditional alliance with Serbia and Russia by joining NATO in 2017.

The government in Montenegro is expected to remain in place only for the next four days, as a new coalition prepares to replace it following elections in August.

Djukanovic’s long-ruling pro-Western Democratic Party of Socialists was defeated by a pro-Serb coalition whose government is set to be voted into office during a parliament session next week.

On Wednesday, Montenegro’s Parliament is due to vote on a new government that unites three opposition groups. The most powerful party is the pro-Russian, pro-Serbian Democratic Front.

The outgoing authorities have accused Serbia of aiding pro-Serb political forces in Montenegro to install allies in power and regain influence.

The foreign ministry’s statement asserted that Bozovic, the Serbian ambassador, “directly disrespected” Montenegro by describing a 1918 decision to join a Serbia-dominated kingdom as an act of “liberation” and “free will” by the Montenegrin people.

Montenegro’s Parliament declared the century-old decision void in 2018, saying it had stripped the country of its sovereignty.

Boris Raonic, president of Montenegro’s Civic Alliance organisation, said Bozovic’s expulsion did not come as a surprise since he had already been officially warned by the foreign ministry several times prior to Saturday’s move.

“I don’t believe [relations between Montenegro and Serbia] could get worse than how it is now,” Raonic told Al Jazeera. 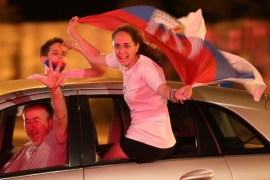 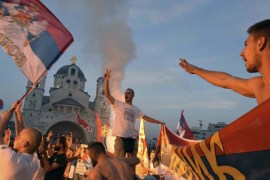 How the use of ethnonationalism backfired in Montenegro

The governing DPS inflamed ethnic tensions to take attention away from corruption scandals. Then it lost the elections. 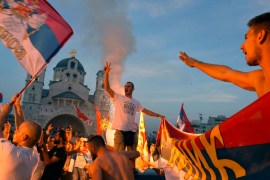 Bosniak minority has been targeted in series of attacks after election ends in a new majority dominated by nationalists.