A high-ranking Iranian nuclear physicist, Mohsen Fakhrizadeh, was assassinated in an ambush near Iran’s capital, Tehran, on Friday.

Fakhrizadeh was shot “by terrorists” in his vehicle in Absard, a suburb in eastern Tehran, later succumbing to his wounds in what was described as a “martyr’s death”, according to Iran’s foreign ministry.

There has been no claim of responsibility for the killing of Fakhrizadeh, who had long been suspected by Western and Israeli intelligence of leading the nation’s military nuclear programme until its disbanding in the early 2000s.

But some have pointed the finger at Israel and the United States for the assassination, which threatens to increase tensions between Tehran and Washington in the final days of the Donald Trump presidency.

Here is how the world has reacted so far to Fakhrizadeh’s killing:

Iran’s Supreme Leader Ali Hosseini Khamenei said Iran’s first priority after the killing was the “definitive punishment of the perpetrators and those who ordered it”, while President Hassan Rouhani accused Israel of being behind the assassination.

“Once again, the evil hands of global arrogance were stained with the blood of the mercenary usurper Zionist regime,” Rouhani said in a statement.

Cabinet minister for Settlement Affairs Tzachi Hanegbi said he had “no clue” who was behind the Fakhrizadeh killing.

“I have no clue who did it. It’s not that my lips are sealed because I’m being responsible, I really have no clue,” Hanegbi, a confidant of Prime Minister Benjamin Netanyahu, told N12’s Meet the Press.

The UN condemned Fakhrizadeh’s killing while urging restraint in order to avoid an “escalation of tensions”.

“We urge restraint and the need to avoid any actions that could lead to an escalation of tensions in the region,” a UN spokesman said. “We condemn any assassination or extrajudicial killing.”

A statement from a spokesperson for the European Union called Fakhrizadeh’s killing “a criminal act” that “runs counter to the principle of respect for human rights the EU stands for”.

It also urged all parties to show “calm and maximum restraint”.

“In these uncertain times, it is more important than ever for all parties to remain calm and exercise maximum restraint in order to avoid escalation which cannot be in anyone’s interest,” the statement said.

In the phone call, Sheikh Mohammed said “such steps will only contribute to pouring more fuel on the fire at a time when the region and the international community are searching for ways to reduce tension and return to the table of dialogue and diplomacy”, according to QNA, Qatar’s state news agency.

He also extended Qatar’s condolences to the government and the people of Iran and called for self-restraint.

Iraqi Foreign Minister Fuad Hussein on Sunday expressed condolences in a phone call with his Iranian counterpart over the killing of Fakhrizadeh.

Hussein condemned actions that do not contribute to supporting stability, foreign ministry spokesman Ahmed Al-Sahhaf said in a statement.

The United Arab Emirates on Sunday condemned the assassination and called on all parties to exercise self-restraint to avoid sliding the region into new levels of instability, according to the state news agency.

Syria’s Foreign Minister Faisal Mekdad accused Israel and “those who supported it” of being behind Fakhrizadeh’s assassination, an act he said would only fuel more tensions in the region.

Mekdad was quoted by state media as telling the Iranian envoy in Damascus that Syria was confident Iran would confront what he called a “terrorist act”.

The Turkish foreign ministry condemned Fakhrizadeh’s killing as a “heinous assassination” and called for the perpetrators of the attack to be held accountable.

In a statement on Saturday, the foreign ministry also urged “all sides to act with common sense and restraint”.

Turkey’s parliamentary speaker meanwhile referred to those responsible for the killing as “terrorist”.

“The assassination of the Iranian scientist was an act of terrorism. Whether it was committed by an illegal or a “legal” organization or a state makes no difference,” Mustafa Sentop said on Twitter.

Germany called for calm and said all sides should avoid taking any steps that could lead to escalation.

“We call on all parties to avoid taking any action which could lead to a new escalation of the situation” which “we absolutely do not need at this moment,” a German foreign ministry spokesman said.

Minister of Foreign Affairs Jorge Arreaza condemned the attack on Twitter, calling the killing of the scientist a “terrorist attack”. 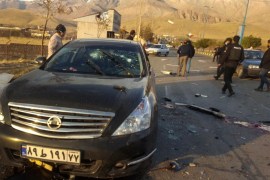 Iran’s foreign minister condemns killing of Mohsen Fakhrizadeh as an ‘act of state terror’ linking Israel to the attack. 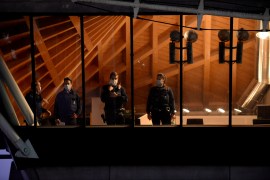 The trial went ahead despite Assadollah Assadi, 48, refusing to appear in the dock, claiming diplomatic immunity. 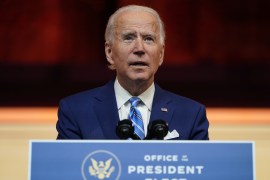 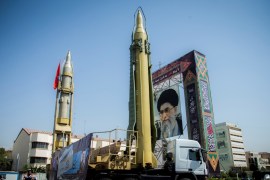 US accuses the four firms of ‘transferring sensitive technology and items’ to Iran’s missile programme.