A federal appeals court in Philadelphia on Friday rejected President Donald Trump’s latest effort to challenge the election results by blocking President-elect Joe Biden from being declared the winner of Pennsylvania.

Trump’s lawyers vowed to appeal to the Supreme Court despite the judges’ assessment that the “campaign’s claims have no merit.”

The 3rd US Circuit Court of Appeals echoed a string of other courts in finding the Trump campaign offered no evidence of any election fraud.

Trump’s campaign has repeatedly alleged election irregularities that amount to fraud, without evidence.

“Free, fair elections are the lifeblood of our democracy. Charges of unfairness are serious. But calling an election unfair does not make it so. Charges require specific allegations and then proof. We have neither here,” Judge Stephanos Bibas, a Trump appointee and former law school professor, wrote in the decision for the three-judge panel.

The ruling is the latest in a series of blows to Trump’s efforts to overturn the results of the election. Most leading media outlets have called the race for Biden, who has won 306 Electoral votes, far more than the 270 necessary to win.

Soon after Friday’s ruling, Trump posted a video from Newsmax on Twitter about alleged voter fraud in Nevada.

The Trump campaign filed the Pennsylvania case earlier this month, saying that county election officials had treated mail-in ballots inconsistently and asking US District Judge Matthew Brann to halt certification of the results.

Some counties had allowed voters to fix minor deficiencies with their ballots, such as a missing “secrecy envelope”, while others did not.

Brann dismissed the case on November 21, saying the case was based on “strained legal arguments” and “speculative accusations”.

The case had been argued last week in a lower court by Trump lawyer Rudy Giuliani, who insisted during five hours of oral arguments that the 2020 presidential election had been marred by widespread fraud in Pennsylvania. However, Giuliani failed to offer any tangible proof of that in court.

US District Judge Matthew Brann had said the campaign’s error-filled complaint, “like Frankenstein’s Monster, has been haphazardly stitched together” and denied Giuliani the right to amend it for a second time.

The 3rd Circuit called that decision justified. The three judges on the panel were all appointed by Republican presidents. The ruling comes four days after Pennsylvania officials certified their vote count for Biden, who defeated Trump by more than 80,000 votes in the state.

Trump perhaps hopes a Supreme Court he helped steer toward a conservative 6-3 majority would be more open to his pleas, especially since the high court upheld Pennsylvania’s decision to accept mail-in ballots through Nov. 6 by only a 4-4 vote last month. Since then, Trump nominee Amy Coney Barrett has joined the court.

“The activist judicial machinery in Pennsylvania continues to cover up the allegations of massive fraud,” Trump lawyer Jenna Ellis tweeted after Friday’s ruling. “On to SCOTUS!”

.@RudyGiuliani and me on Third Circuit’s opinion:

The activist judicial machinery in Pennsylvania continues to cover up the allegations of massive fraud.

We are very thankful to have had the opportunity to present proof and the facts to the PA state legislature.

Trump said on Thursday he would leave office if the Electoral College certified Biden’s victory when it convenes in December. 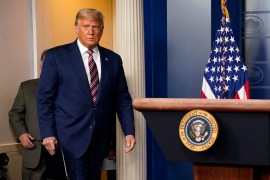 The president continues to claim he defeated Joe Biden, despite evidence to the contrary. 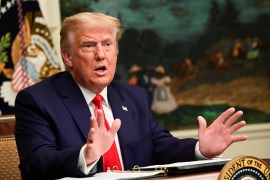 Donald Trump’s latest comments are the closest he has come to conceding the US election as hopes for victory fade. 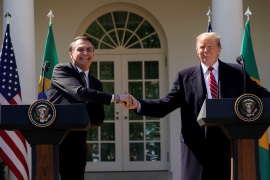