Americans awoke on Thursday to celebrate a Thanksgiving Day transformed by the coronavirus pandemic, with the Macy’s parade limited to a television-only event and many families resigned to meeting on video for turkey dinner.

Thanksgiving, normally a day for family and friends to gather in big numbers to feast and remember life’s blessings, has been upended by the pandemic, with cases and deaths surging in recent weeks as cooler temperatures push people indoors where the virus spreads more easily.

The Macy’s Thanksgiving Day Parade in New York, a spectacle of giant character balloons that has delighted children for nearly a century, has been scaled back significantly. The route is a block-long, rather than four kilometres (2.5 miles), balloon handlers have been replaced by specially rigged vehicles, and spectators will not be allowed to line the streets as before.

The event kicked off on Thursday morning with a series of musical performances and balloons, including a four-storey-tall one of the lead dog from the cartoon series PAW Patrol – all without the usual millions on hand to watch from the street.

US hospitalisations for COVID-19 reached a record 88,000 on Wednesday, and experts warn that Thanksgiving could significantly boost a death toll that has exceeded 260,000 nationwide.

Despite advice from the Centers for Disease Control to stay home for the holiday, nearly five million Americans travelled by air from Friday to Tuesday, according to the US Transportation Security Administration, although that is less than half the figure during the same period last year.

Many Americans see the annual ritual get-together for turkey, mashed potatoes and pumpkin pie as important enough to risk possible infection. Nearly 40 percent plan to attend a “risky gathering” during the holiday season, either in excess of 10 people or with people from outside their household, and a third will not require masks, according to a national survey by the Ohio State University Wexner Medical Center.

Many others have cancelled travel plans and will instead connect with loved ones over FaceTime or Zoom.

Those who are flying witnessed a distinctly 2020 landscape at the nation’s airports: plexiglass barriers in front of the ID stations, rapid virus testing sites inside terminals, masks in check-in areas and on board planes, and paperwork asking passengers to quarantine on arrival at their destination.

While the number of Americans travelling by air ahead of the holiday was far lower than last year, many pressed ahead with their holiday plans. Some were tired of more than eight months of social distancing and determined to spend time with loved ones.

About 900,000 to one million people a day passed through US airport checkpoints from Friday through Wednesday, a drop-off of about 60 percent from the same time a year ago. Still, those were some of the biggest crowds since the COVID-19 crisis took hold in the US in March.

Last year, a record 26 million passengers and crew passed through US airport screening in the 11-day period around Thanksgiving.

More Americans drive rather than fly during the holiday, and AAA has projected those numbers are also likely to be lower this year. How much lower the automobile club has not said. 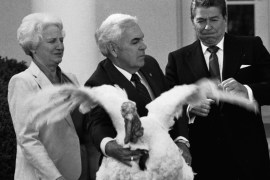 When is Thanksgiving Day and why is it celebrated?

In the US, Thanksgiving Day will be celebrated on Thursday, November 28. 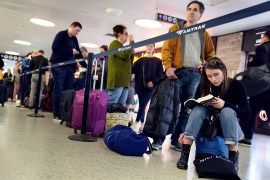 US health agency urges Americans to stay home for Thanksgiving

The CDC says travelling may increase the spread of COVID-19 amid an uptick in infections across the United States. 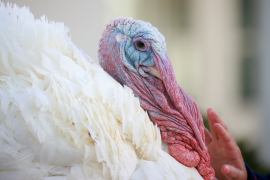 The coronavirus pandemic has had an economic effect on everything from airlines to turkey farmers to parade routes.