The football world has gone into mourning after the death of Argentinian football legend Diego Armando Maradona, with tributes pouring in from all over the globe.

Long considered one of the greatest players, the 60-year-old superstar who led his country to a World Cup title in 1986 died on Wednesday after suffering a heart attack in the city of Tigre.

Here’s how the world reacted:

Argentina President Alberto Fernandez declared three days of national mourning, expressing his sorrow for the loss and thanking Maradona “for having existed”.

“You took us to the top of the world. You made us immensely happy. You were the greatest of all. Thanks for having existed, Diego. We will miss you for a lifetime,” he said on Twitter.

Meanwhile in Argentina’s capital, Buenos Aires, where he has long been worshipped as “El Dios”, the God, people began pouring onto the streets gathering in the San Andres neighbourhood where he lived and also in La Plata where he had lately been technical director for local team Gimnasia y Esgrima.

Argentinian football superstar Leo Messi, widely seen as the best active player in the world, said that this was a “very sad day for all Argentines and football”.

“He has left us but he will never leave us because Diego is eternal. I will keep all the beautiful moments that I lived with him and would like to send my condolences to all his family and friends. RIP.”

Retired Brazilian football star Pele, considered by many as the only player to have come close to Maradona’s skill level, was among those to express his sorrow.

“Sad news today. I have lost a dear friend, and the world has lost a legend,” Pele, 80, wrote on Instagram, alongside a picture of Maradona hoisting the World Cup trophy in 1986.

“There is much more to say, but for now may God give his family strength. One day, I hope, we will play soccer together in the sky.”

“Today I say goodbye to a friend and the world says goodbye to an eternal genius. One of the best of our times. An unparalleled magician. He leaves too early but leaves a legacy without limits and a void that will never be filled. Rest in peace. You will never be forgotten,” he said on Instagram.

Victor Hugo Morales, Argentina’s most popular sportscaster, said Maradona will ultimately be remembered for a thrilling style of play that has never been duplicated.

“He has been one of the great artists of my time. Like great masters of music and painting, he has defied our intellect and enriched the human spirit,” Morales said. “Nobody has thrilled me more and left me in such awe as Diego.”

Former England striker Gary Lineker hoped Maradona will now “finally find some comfort in the hands of God”, he said on Twitter, referencing the Argentinian’s infamous “hand of God” goal in the World Cup quarterfinal match against England in 1986.

“By some distance the best player of my generation and arguably the greatest of all time,” he added, posting in another tweet a video showing the two players meeting in 2006.

Always a delight to be in his company. 🙌🏻 https://t.co/SfTo8SLqlR

Italian football club Napoli, where Maradona played from 1984-1991, said it was impossible to describe the sadness felt after the news of Maradona’s death broke.

“What words can we use [to describe] a sorrow as the one we are living through? Now is the moment of tears. Then there will be the moment for words,” it said on Twitter.

Maradona was adored in Napoli after taking the team to two Serie A titles. Videos on social media showed people in the southern city mourning the football star in front of murals depicting Maradona.

Translation: Napoli mourns for a son.

“The death of Maradona is terrible news. He was more than a champion, he was a football genius, an absolute champion,” Spadafora said. “In an unrepeatable season he represented the dreams and hopes of the people of my city. Naples is crying tonight.”

French footballing great Michel Platini said, “a bit of our past has gone”.

“I am very sad. I am nostalgic for what was a wonderful era,” Platini, who starred for France in the 1980s and played for Juventus against Maradona’s Napoli, told French radio station RTL. “Diego left a mark on my life.”

The Argentinian Football Association, through its president Claudio Tapia, expressed its deepest sorrow. “You will always be in our hearts,” it said on Twitter.

Maradona also played for the Spanish team Barcelona for two years starting from 1982.

“Thank you for everything Diego. FC Barcelona expresses its deepest condolences regarding the death of Diego Armando Maradona, a player for our club (1982-84) and an icon of world football,” Barcelona said in a statement.

Thank you for everything, Diego pic.twitter.com/bJ9l3ixY7A

“With pain in my soul I have learned of the death of my brother, Diego Armando Maradona. A person who understood and fought for humble people. The best player in the world.”

“Eternally Thanks Diego for everything you gave us !!! Rest in peace. You earned it more than enough,” he said on Twitter.

“There are a few incredible players in all of history, he is one of them. For people of our generation, the World Cup in ’86 in Mexico was something which made this sport better.”

Boxer star Mike Tyson also paid his respects for the football player saying he was both a hero, and a friend.

The Hand of God, Maradona has left us. In 86 we both won our championships. They use to compare the two of us. He was one of my hero’s and a friend. I respected him so much. He will be greatly missed. pic.twitter.com/E5j6DSfJas 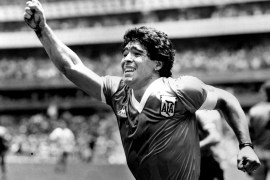 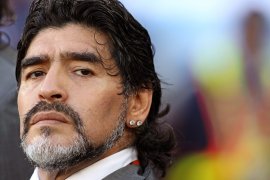 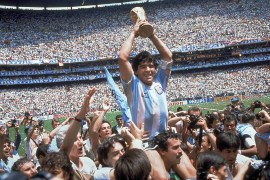 One of the greatest footballers of all time, Maradona passed away at age 60 after suffering a heart attack.