Tehran, Iran – Iran has rejected an “interference” by Sweden after Stockholm called on Tehran not to execute Iranian-Swedish academic Ahmadreza Djalali, who was handed a death penalty three years ago for spying and is slated to be executed soon.

“The judicial power of the Islamic republic is independent – all interference in the issuance or carrying out of judicial decisions is rejected as unacceptable,” Iran’s foreign ministry spokesman Saeed Khatibzadeh said in a statement late on Tuesday.

Djalali, a medical doctor and lecturer at the Karolinska Institute in the Swedish capital, reportedly called his wife from prison on Tuesday, informing her that he could be executed soon.

That prompted Swedish Foreign Minister Ann Linde to call her Iranian counterpart, Mohammad Javad Zarif, to request the Iranian government not to carry out the death sentence.

“In light of reports that Iran may have planned to enforce a death penalty against the Swedish citizen Djalali, I have today spoken with Iran’s foreign minister [Mohammad Javad] Zarif,” Linde posted on Twitter.

“Sweden condemns the death penalty and works to ensure that the verdict against Djalali is not enforced.”

The Iranian foreign ministry confirmed Linde’s call in an initial statement but made no mention of discussing Djalali.

According to the foreign ministry, Zarif spoke to Linde about the “illegal and unfair sanctions of the United States” on Iran and “Europe’s inability to enforce its commitments” under a 2015 landmark nuclear deal that US President Donald Trump withdrew from in 2018.

Zarif told Linde Europe shouldn’t “sacrifice its independence and sovereignty for the bullying and cruel policies of the US”.

Djalali, 49, travelled to Iran in 2016 reportedly at the invitation of the University of Tehran and the Shiraz University.

He was arrested in April 2016 on suspicions of spying and a tape of his confessions was aired by Iran’s state broadcaster.

Djalali was accused of passing information on top Iranian nuclear scientists to Israel who were later killed. He was found guilty of “corruption on earth” – a charge that carries the death penalty.

Djalali’s family and international human rights groups claim he is innocent and that he was forced to make the confessions.

Amnesty International on Tuesday said it was “horrified” to hear reports of Djalali’s imminent execution and called for an “immediate halt” to such plans.

“We call on members of the international community to immediately intervene, including through their embassies in Tehran, to save Ahmadreza Djalali’s life before it is too late,” Amnesty’s deputy director for the Middle East and North Africa, Diana Eltahawy, said.

Earlier in November, roughly a year after protests over economic hardship broke out across Iran, an United Nations committee dealing with human rights adopted a resolution put forward by Canada that among other things condemned the imprisonment of dual nationals in Iran.

Iran slammed the resolution as having no “legal credibility” and said its sponsors had a history of abusing human rights in their own countries and those of other nations, such as Palestine and Yemen.

Iran said the resolution made no mention of the unilateral sanctions imposed by the United States that Tehran calls “economic and medical terrorism”.

Iran does not formally recognise the dual nationality status. 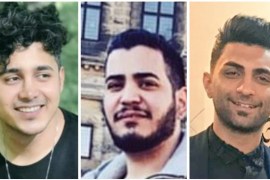