TPLF leaders on Tuesday said the Tigrayan people are “ready to die” in defence of their land and said they have “completely destroyed” the federal army’s 21st mechanised division.

Later on Tuesday, the United Nations Security Council is expected to discuss the unrest, which has forced tens of thousands of Ethiopian civilians to seek refuge in neighbouring Sudan.

But analysts say the government troops capturing the Tigrayan capital may not be the end of the conflict in one of the poorest regions in Africa’s second-most populous country.

“The conflict could evolve and there is frightening possibility it could become entrenched. Both sides are heavily armed and this could lead to a prolonged insurgent warfare,” Ahmed Soliman, research fellow at London-based think-tank, Chatham House, told Al Jazeera.

“The impact of the conflict could also continue to spill over into neighbouring countries.”

Abiy said the TPLF leaders were “at a point of no return”, urging them “to take this last opportunity” as the Ethiopian army said it was encircling the city, home to an estimated 500,000 people.

Soliman said Abiy’s ultimatum “fits in with the prime minister and federal government’s narrative that they are implementing a law enforcement operation to remove criminal elements from Tigray”.

“The ultimatum is also meant to weaken support for the TPLF amongst the civilians in Tigray and encourage them to leave or support the federal government,” he said.

For three decades, the Tigrayans dominated the governing alliance composed of four ethno-regional parties until Abiy, a member of the Oromo ethnic group, came to power in April 2018.

Under Abiy, the TPLF accused Addis Ababa of unfairly targeting leaders from its region in corruption prosecutions, removing many of them from top government positions.

A year ago, Abiy dissolved the governing coalition and created the Prosperity Party in its place. The TPLF refused to play ball and went their separate way.

In September, tensions further escalated after Tigray held its own election, defying the federal government which postponed the general elections due to the coronavirus pandemic.

The federal government retaliated by cutting funds to the region, with the TPLF saying the move was “tantamount to an act of war”.

“Abiy speaks of democracy but has zero interest in any of the things that democracy stands for,” Solomon Mezgebu, a scholar from Tigray, told Al Jazeera.

“Tigray introduced federalism in Ethiopia. Abiy is against federalism so he has mobilised the country’s entire army to subjugate, crash and annihilate the people behind the idea.”

As tensions grew, phone lines and internet connections were cut off in Tigray and aid agencies blocked from accessing the mountainous region.

Addis Ababa says the offensive is targeted at only the TPLF leaders, not the people from the region.

“In our law enforcement operations, all the necessary precautionary measures have been taken to ensure that civilians are not harmed,” Abiy said in a statement on Sunday.

“Although the TPLF clique want severe damages to occur, our military planes have been very careful not to harm civilians, to the extent where missions have been aborted on identifying civilians around target areas,” the statement added.

Still, hundreds of people, including civilians, are feared killed in the three-week conflict, while more than 40,000 people have crossed into Sudan, according to the UN.

Last week, the UN refugee agency, UNHCR, said 4,000 people were crossing into Sudan from Ethiopia every day since the conflict began.

On Monday, rights group Amnesty International called on the Ethiopian government to protect civilians in the offensive on regional capital, Mekelle.

“The conflict in the Tigray region has already claimed hundreds of civilian lives, left many more injured, and forced thousands into refugee camps in neighbouring Sudan,” Deprose Muchena, Amnesty International’s director for East and Southern Africa, said on Monday.

“Commanders in both the Ethiopian national army and the TPLF must take active steps to protect civilians during any fighting, including by taking all feasible precautions to avoid harm to civilians and civilian infrastructure and avoiding locating military facilities and soldiers near concentrations of civilians,” Muchena said.

Meanwhile, the UN Security Council late on Monday said it will hold its first meeting on the situation in Ethiopia, as Abiy’s government warned the TPLF leaders would face charges of high treason, “terrorism” and attacking a neighbouring state.

Tigrayan scholar Soloman said Abiy’s forces may end up “capturing all the towns and villages” in Tigray, “but the people of Tigray will never be subjugated”.

“History tells us that will not happen,” he told Al Jazeera. “The world, and the UN Security Council, in particular, need to demand cessation of the fighting because there will be no winners, only losers.” 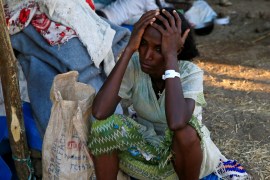 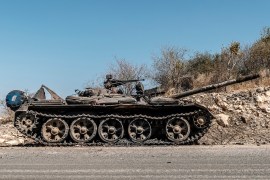 Tigray military promises to ‘arm every civilian to defend Mekelle’, the capital city with a population of about 500,000. 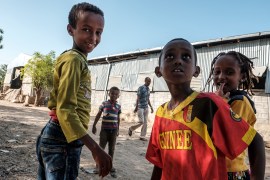 The Ethiopian army declared Humera ‘liberated’ on November 12 after heavy clashes in the first days of the conflict. 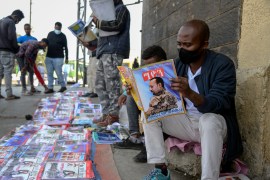 Is Ethiopia on the brink of civil war?

We discuss the conflict in Tigray with a minister from Abiy Ahmed’s government and a member of the TPLF.