Hong Kong pro-democracy activist Joshua Wong was remanded in custody on Monday after he pleaded guilty to charges of organising and taking part in a demonstration outside the city’s police headquarters during last year’s anti-government protests.

Wong, who was just 17 years old when he became the face of the 2014 student-led Umbrella Movement democracy protests, faces up to five years in prison if convicted.

His fellow activists Ivan Lam and Agnes Chow were also remanded after they pleaded guilty over charges relating to the protest held on June 21 last year.

All three, formerly members of the now-disbanded Demosisto political party, will be sentenced on December 2, according to local media.

Before entering the courtroom, Wong told reporters that he would not be surprised if immediate detention followed.

“Perhaps the authorities wish me to stay in prison one term after another,” Wong said.

“But I am persuaded that neither prison bars, nor election bans, nor any other arbitrary powers would stop us from activism. What we are doing now is to explain the value of freedom to the world.”

Wong, who is now 24, was not a leading figure in last year’s pro-democracy protests, but his continued activism has drawn the wrath of China, which sees it as a “black hand” of foreign forces.

He disbanded his pro-democracy group Demosisto in June, just hours after China’s parliament passed a sweeping national security law for Hong Kong, punishing any action Beijing considers as subversion, secession, “terrorism” and collusion with foreign forces, with up to life in prison.

Lam, who also spoke ahead of the court hearing, said he too was prepared to be jailed.

The pair had previously pleaded not guilty to the charges, but Wong wrote on his Facebook page on Sunday that he and Lam had decided to change course after consulting with their lawyers.

Chow had already pleaded guilty to charges of inciting others and taking part in the protest.

“If I am sentenced to prison this time, it will be the first time in my life that I have been in jail,” Chow wrote on her Facebook page on Sunday.

“Although I am mentally prepared, I still feel a little bit scared. However, compared to many friends, I have suffered very little. When I think of this, I will try my best to face it bravely,” she wrote.

And he says it was inevitable – @joshuawongcf in custody until sentencing next week. Almost made it to a year without going to jail! #HongKongProtests #HongKong pic.twitter.com/nyY8wKnayh

The Hong Kong Democracy Council, a Washington DC-based organisation dedicated to preserving the territory’s freedoms, condemned the court decision and called for their release.

“Make no mistake, when they pled guilty in court today, it was not a judgement on them but rather a judgement against a poisoned Hong Kong judiciary system no longer independent or capable of rendering justice,” managing director Samuel Chu said in a statement.

Wong also faces charges of participating in an unauthorised assembly in October 2019 and on June 4, 2020 over a vigil commemorating the crackdown on protesters in and around Beijing’s Tiananmen Square in 1989.

He spent five weeks in jail last year for contempt of court, before being released on June 16 when the protests were already in full swing. Promising to continue fighting for democracy, he made appearances at numerous rallies throughout the year.

The protests were deliberately leaderless, mostly organised by social media and encrypted chat forums. They were also much more violent.

More than 10,000 people were arrested during the protests and Hong Kong’s courts are now filled with trials as most of the city’s leading activists and opposition figures face prosecution.

The demonstrations petered out at the start of this year because of fatigue, mass arrests and the emergence of the coronavirus. An anti-pandemic ban on more than four people gathering in public has remained in place for most of this year.

Wong and other activists’ repeated arrests have drawn criticism from Western governments who say China is not fulfilling its obligation to allow Hong Kong a high degree of autonomy, agreed with former colonial master Britain when the city returned to Chinese rule in 1997.

China denies the accusation and says matters in Hong Kong are its internal affair. 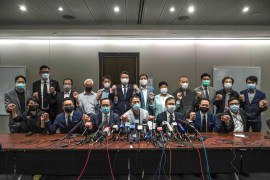 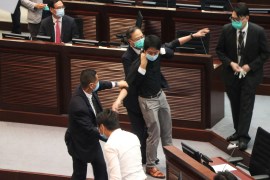 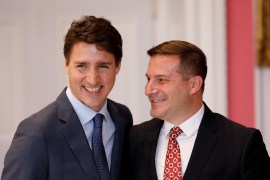