Voters have gone to the polls in Burkina Faso for presidential and legislative elections held against the background of a spiralling conflict and one of the world’s fastest growing humanitarian crises.

Insecurity, caused by the devastating war in the western portion of Africa’s Sahel region that has also spread in Burkina Faso, has defined the first term of President Roch Kabore, who is now seeking another five years in power.

Facing 12 other candidates, Kabore is expected to come first but the opposition hopes to split the vote, depriving him of the 51 percent support needed for an outright victory in Sunday’s first round. It then plans to form a coalition behind the strongest opposition candidate for the second round of voting.

After voting in a school in the capital, Ouagadougou, Kabore told reporters: “I call on all Burkinabe to vote, whatever their leaning. It’s about the democracy of Burkina Faso, it’s about development, it’s about peace.”

The election went smoothly in the capital and there were no reports of large-scale violence elsewhere during the vote. But some polling stations in insecure eastern areas had to be closed because of threats, the electoral commission said.

“People were threatened. They told them: ‘those who put their fingers in the ink can say goodbye to their finger’,” the commission’s chief, Newton Ahmed Barry, said at a press conference, referring to the ink marks people are given to show they have voted.

Campaigning ran alongside continued bloodshed and the fear of attacks by armed groups on voting day was prevalent.

Fourteen soldiers were killed in an ambush in the north claimed by ISIL (ISIS) earlier this month, one of the deadliest attacks on the military in five years of rebellion.

No votes were expected tp be cast in almost 20 percent of the country, where large swathes of territory remain outside the government’s control and attacks by armed groups strike almost daily.

“One fifth of the country is not going to be able to vote, so on one side they will continue to feel alienated from the mainstream government,” Chukwuemeka Eze, executive director of the West Africa Network for Peacebuilding, told Al Jazeera.

“And then on the other side, is the perception of the extremists that they have actually succeeded because if they [citizens] are not able to vote, it means they are winning the war because the state machinery is not well to allow the citizens to vote, which is what actually they [fighters] have been aiming at.”

Violence in the north – as in neighbouring Sahel states Mali and Niger – has become intertwined with clashes between ethnic groups.

Last year, the conflict led to more than 2,000 deaths in Burkina Faso and has also drawn in troops from France and the United States in the effort to defeat armed groups, including some with links to ISIL group and al-Qaeda. More than one million Burkinabe people have been displaced by the fighting.

The Fulani community has in particular been targeted for recruitment by fighters, and attacks regularly spark reprisals, continuing the cycle of violence.

Humanitarian groups have condemned massacres of Fulani civilians by pro-government militias or the army.

Compaore, who was overthrown by a popular uprising in 2014 after 27 years in power, is now in exile.

Diabre told reporters on Saturday “there is a huge operation orchestrated by those in power to carry out a massive fraud” so as to give Kabore a first-round victory.

“We will not accept results marred by irregularity,” added Diabre, surrounded at a press conference by five of the 11 other opposition candidates, including Komboigo.

Crisis rooms have been set up, where organisations can monitor voting to check for irregularities, voter suppression and violence, according to Codel, a local organisation focused on elections.

Dozens of people lined up at polling stations in Ouagadougou before sunrise on Sunday.

Oumar Zorome, 55, was the first to vote in the city’s Patte D’Oie district and is backing Kabore, who he says has built roads and is not responsible for the country’s struggles with insecurity.

“I’m voting for the change in this country that’s already been taking place to continue,” he said.

Voting also began in violence-scarred regions in the country where just weeks ago officials were not sure it would be possible to vote.

In Barsalogho, in the country’s Center North region, more than 60 people were in line when the polls opened amid added security, according to an official.

“I’m surprised. I didn’t think we’d be able to vote but things are calm so far,” Saidou Wily, a government official in Barsalogho, told The Associated Press.

Violence linked to al-Qaeda and ISIL has displaced more than one million people, and cut off swaths of the country, preventing at least 166,000 new voters from being able to register, according to election officials.

Results are expected in the next few days. 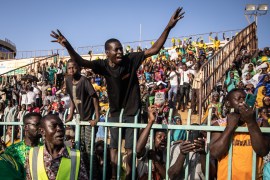 Burkinabe voters to take to polls held against background of escalating violence and diminishing social cohesion. 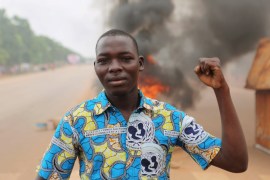 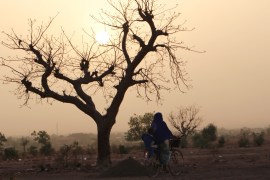 Caught between climate crisis and armed violence in Burkina Faso

Desperate families in the Sahelian country are plagued by a double burden that has left many displaced and destitute.