Nigeria has slipped into a recession after its gross domestic product contracted for the second consecutive quarter, according to official data released.

Africa’s biggest economy is in recession for the first time since 2016. The recession four years ago was its first in a generation, and the country emerged from it the following year.

However, growth has been fragile and COVID-19 has hit the economy hard, amid low oil prices.

Nigeria normally accounts for an average output of two million barrels per day. But the effects of the pandemic and low oil prices have cut production to approximately 1.4 million barrels.

“Cumulative GDP for the first nine months of 2020 therefore stood at -2.48 percent,” he added.

Following Nigeria’s first confirmed COVID-19 case in late February, lockdowns were imposed from late March until early May in the main cities – economic hub Lagos and the capital, Abuja.

Lockdowns were also imposed in some of the country’s other states and a ban was placed on interstate travel.

“The performance of the economy in Q3 2020 reflected residual effects of the restrictions to movement and economic activity implemented across the country in early Q2 in response to the COVID-19 pandemic,” the statistics office said in a report published on Saturday.

“As these restrictions were lifted, businesses reopened and international travel and trading activities resumed, some economic activities have returned to positive growth,” it said.

The government had previously said it expected the economy to contract by as much as 8.9 percent this year in a worst-case scenario without stimulus.

The International Monetary Fund has forecast a 5.4-percent drop in Nigeria’s GDP this year. 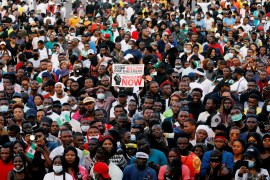 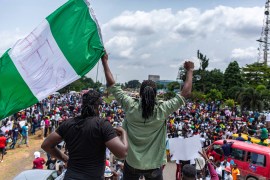