Police in Austria have launched a manhunt after gunmen opened fire at multiple locations across central Vienna, killing at least four people and wounding 22 more in what Austrian Chancellor Sebastian Kurz described as a “repulsive terror attack”.

Authorities identified the gunman in Monday night’s attack as a 20-year-old Austrian-North Macedonian dual national, who wanted travel to Syria to join the ISIL (ISIS) group.

“It is now confirmed that yesterday’s attack was clearly an Islamist terror attack,” Kurz said. “It was an attack out of hatred – hatred for our fundamental values, hatred for our way of life, hatred for our democracy in which all people have equal rights and dignity.”

The attacks, in six locations including near a synagogue in the centre of the city, were carried out by “several suspects armed with rifles”, police said on Monday night.

Authorities are still trying to determine whether further attackers may be on the run. 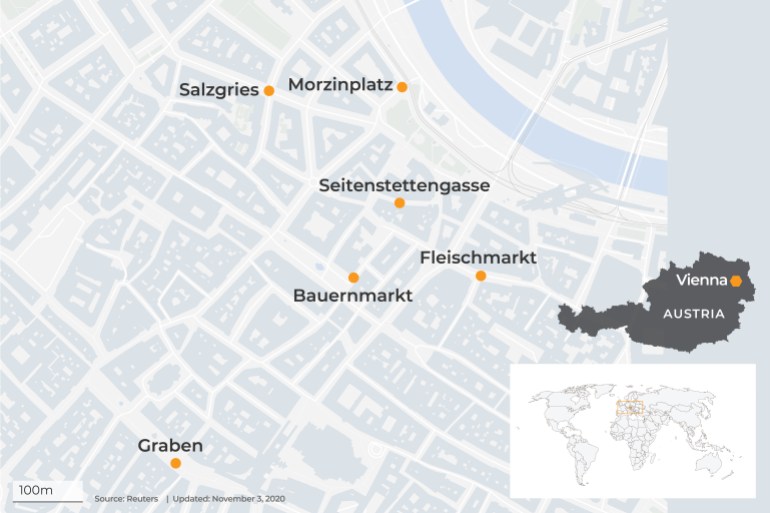 Austrian police have made 18 raids and detained 14 people in their investigation into the deadly shooting in Vienna, Interior Minister Karl Nehammer said on Tuesday.

Nehammer said that the dead gunman, who had roots in the Balkan nation of North Macedonia, had a previous conviction under a law that punishes membership in “terrorist” organisations.

The attacker, named as Kujtim Fejzulai, was sentenced to 22 months in prison in April 2019 because he had tried to travel to Syria to join the Islamic State group. He was granted early release in December under juvenile law.

The attack began at about 8pm (19:00 GMT) on Monday, when several men armed with rifles opened fire – starting outside the city’s main synagogue – as many people took advantage of the last evening before a nationwide curfew took effect because of COVID-19.

“It sounded like firecrackers, then we realised it was shots,” said one eyewitness quoted by ORF.

A shooter had “shot wildly with an automatic weapon” before police arrived and opened fire, the witness added.

Officials said schools would be closed on Tuesday.

Frequent sirens and helicopters could be heard as emergency services responded to the shootings, and a large area of central Vienna was cordoned off.

Thomas Mayer, the European Editor at Austria’s Der Standard newspaper, told Al Jazeera that “there are police everywhere and the city centre is closed”.

“The problem is there are so many people who went to restaurants and bars to have some joy in the last evening before lockdown (and now) these people cannot go home,” he added.

As of 06:30 am, this is what we can confirm towards the assault in Vienna’s inner city district: #0211w pic.twitter.com/AIzIovFyKh

“We are experiencing difficult hours in our republic,” Kurz said on Twitter shortly after the attacks, adding that the army would protect sites in the capital so the police could focus on anti-terror operations.

“Our police will act decisively against the perpetrators of this repulsive terror attack,” he said. “We will never be intimidated by terrorism and we will fight this attack with all means”.

While the shootings began near Vienna’s main synagogue, Jewish community leader Oskar Deutsch said on Twitter that it was not clear whether the synagogue and adjoining offices had been the target.

He added that they were closed at the time.

Rabbi Schlomo Hofmeister told London’s LBC radio he was in the compound of the synagogue when the attack took place.

“Upon hearing shots, we looked down [from] the windows and saw the gunmen shooting at the guests of the various bars and pubs,” he said.

“The gunmen were running around and shooting at least 100 rounds or even more in front of our building,” he said.

Still active: Stay at home! If you're on the Streets, take shelter! Keep away from public places, don't use public Transportation! #0211w

Bars and restaurants were packed with customers at the time of the shooting.

“Suddenly the shooting started, at first we did not know what it was … Then there was shooting again, but closer, so we started to run away,” she told The Associated Press news agency.

“Because we did not know if we were running in the right direction, we ran into a hotel and hid there.”

Many European leaders took to social media to express their shock at the shootings.

On Twitter, French President Emmanuel Macron said France “shared the shock and grief of the Austrian people … This is Europe. Our enemies must know who they are dealing with. We will never give up.”

UK Prime Minister Boris Johnson said he was “deeply shocked” at the attacks, and said Britain stood united with Austria, a sentiment shared by Mark Rutte, Prime Minister of the Netherlands.

“Our thoughts are with the victims and their families, and with the Austrian government in dealing with this heinous act,” Rutte wrote on Twitter.

And Germany’s foreign ministry tweeted that the reports from Austria were “horrifying and disturbing”.

“We can’t give in to hatred that is aimed at dividing our societies,” the ministry added.

Czech police said they were conducting checks on the border with Austria.

“Police are carrying out random checks of vehicles and passengers on border crossings with Austria as a preventive measure in relation to the terror attack in Vienna,” Czech police tweeted.