India and the US signed a key defence deal late last month in a move seen as a last-ditch push by the Trump administration to score a foreign policy success just a week before the US elections.

Experts say the Basic Exchange and Cooperation Agreement for Geo-Spatial Cooperation (BECA) deal will bring the two countries closer to each other and help them counter China.

The deal, announced during the bi-annual so-called “two plus two” meeting in New Delhi, will give Indian military access to data that are considered vital for the firing of missiles, armed drones and other targets with precision.

Both the countries, represented by US Secretary of State Mike Pompeo and Defence Secretary Mark Esper and their Indian counterparts Subrahmanyam Jaishankar and Rajnath Singh respectively, termed the partnership significant.

“At a time when it is particularly important to uphold a rules-based international order, the ability of India and the US to work closely in defence and foreign policy has a larger resonance,” External Affairs Minister Jaishankar said at the Ministerial Dialogue in New Delhi.

“Together, we can make a real difference when it comes to regional and global challenges, whether it is in respecting territorial integrity, promoting maritime domain awareness, countering terrorism or ensuring prosperity.”

“The BECA deal is a game-changer. It is the last of the foundational defence agreements to be signed between the US and India, and one that India had long resisted signing,” said Michael Kugelman, deputy director of the Asia programme at the US-based Wilson Center.

India has long attempted to balance its relations with the US and China, with whom it shares a 3,500km-long (2,100 miles).

The BECA deal is a game-changer

Michael Kugelman, deputy director of the Asia programme at the US-based Wilson Center

But India’s military standoff in June on its western border with China seems to have pushed New Delhi towards the US, which has been trying to bolster allies against an increasingly assertive China.

At least 20 Indian soldiers were killed in the deadliest border standoff in nearly 50 years. Thousands of military personnel continue to remain at the disputed border near Ladakh region.

“The US will stand with the people of India as they confront threats to their sovereignty and to their liberty,” Pompeo told reporters in New Delhi.

In line with President Donald Trump’s diplomatic offensive against China over trade, the coronavirus pandemic and the South China Sea issue, the US Secretary of State also called on to “thwart threats posed by the Chinese Communist Party”.

Kugelman said that the agreement is significant for India as it will strengthen its “conventional offensive and defensive capacity.”

“It gives India access to detailed, sensitive intelligence that can enable to be more accurate in targeting terrorists or rival militaries, and to better monitor the location of the enemy either just across the border or in faraway seas,” he said.

New Delhi, which for decades pursued “non-alignment” foreign policy particularly during the Cold War, has inched closer to the US since it opened its economy in the early 1990s.

India used to be a strategic partner of America, now we can see it as a de facto military ally of America.

Currently, the US is India’s biggest trading partner with nearly $90bn in annual bilateral trade, but New Delhi has had resisted in joining the US military alliances to avoid antagonising China.

But some defence analysts, such as Pravin Sawhney, said the BECA deal will have serious geopolitical, political and military implications in the entire region.

“It (the US) is strengthening its military allies and partners in the Asia Pacific region and India is part of that,” he said.

“India used to be a strategic partner of America, now we can see it as a de facto military ally of America without any reciprocal US responsibility in Indian wars,” Sawhney said, adding that Pompeo’s visit will bring India into a “tighter military embrace of the US”.

S Kalyanaraman, research fellow at the Manohar Parrikar Institute for Defence Studies and Analyses in New Delhi, said that to counter China, India needed US support.

“I wouldn’t say that it (India) is a de facto ally [of the US] but there is every chance that it might become one because the China threat is not going away anywhere,” he said.

But given India’s divergence on several US foreign policy issues, some analysts said New Delhi would not go for a total embrace of the US.

“The view, I think, with both the governments is to have what is now increasingly being called as an alignment between the two countries rather than an alliance,” said Pratim Pal, the foreign affairs editor of the Hindustan Times newspaper.

“An alignment means that you pick and choose the areas in which you agree to work together and, over time, the number of areas that you work together will just keep expanding as your relationship gets stronger.”

And Pompeo’s visit – the fourth by a US secretary of state during the Trump administration – was an indication of the close ties forged between the two countries.

India’s Prime Minister Narendra Modi and US President Donald Trump share a personal bonhomie, and both have offered the other praise and jointly addressed huge gatherings in the US and India.

In February this year, President Trump visited India and addressed a gathering of about 100,000 people in Ahmedabad city of Gujarat – Modi’s home state. Many said Ahmedabad event was an effort by Trump to woo Indian American voters back home.

But Trump, who made trade as the cornerstone of his diplomacy, has failed to sign a much-delayed trade deal with India. The countries have also levied additional trade tariffs.

Foreign policy experts in India expressed concern at a deal signed so close to the elections, but Kugelman from the Wilson Center said that the India-US ties enjoy bipartisan support in the US.

“It conveys an important message: The US-India relationship enjoys bipartisan support in the US and transcends partisan considerations like an election,” said Kugelman.

“It’s true that if Joe Biden wins the election, the relationship would pick up right where it left off under Trump. The 2+2 meetings would likely continue, and the same bilateral goals would be pursued.”

The US has also been eyeing to corner bigger pie of India’s defence sector, with Russia still providing the bulk of New Delhi’s defence equipment. India is the world’s biggest defence buyer.

US defence sales have seen a significant increase during the past two decades, with up to $22bn worth of weapons sold since 2007.

“BECA is part of a continuing process of consolidating the military and technological relationship between the US and India, in particular, it helps India to develop a technological lead over China and compensate for China’s much larger military and economic size,” said Pal of the Hindustan Times.

Pal said China has also been wary of Quad or the Quadrilateral Security Dialogue – an informal strategic dialogue between the US, Japan, Australia and India that has been dubbed by some as a potential “Asian NATO”.

Last year, the US and India held their first-ever tri-service exercise, Tiger Triumph, in which the US Navy and Marines, Air Force, and Army participated.

On Tuesday, New Delhi will join the US, Japan and Australia for a naval exercise in the Indian Ocean that Beijing believes is aimed against it.

Beijing based analyst Einar Tangen said the agreement will give India access to intelligence data, including satellite images of the disputed border.

Andy Mok, a senior research fellow at Beijing based Center for China and Globalisation, said the BECA agreement was an attempt on the part of a “declining” US power to “contain China”.

“The fragility of the American military is becoming increasingly apparent. As a result, the US has little choice but to seek allies in this quixotic endeavour,” he told Al Jazeera. 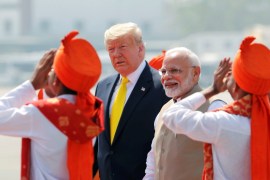 Trump and Modi: A meeting of minds or egos? 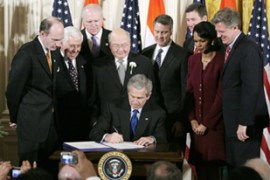 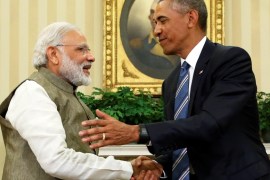 This turnaround in the ties is in stark contrast to the Cold War-era when the two sides did not see eye-to-eye.

The world’s biggest computer software company has launched versions of its tools in Hindi and other regional languages to tap demand in India.