Trump has been focusing on “law and order”; Biden has been trying to strike a conciliatory note. The Black Lives Matter movement – and whether Trump will release his taxes – are among the many issues Americans will consider when choosing their president.

As the hotly contested election approaches, Al Jazeera has been speaking to voters across the US, asking nine questions to understand who they are supporting and why. 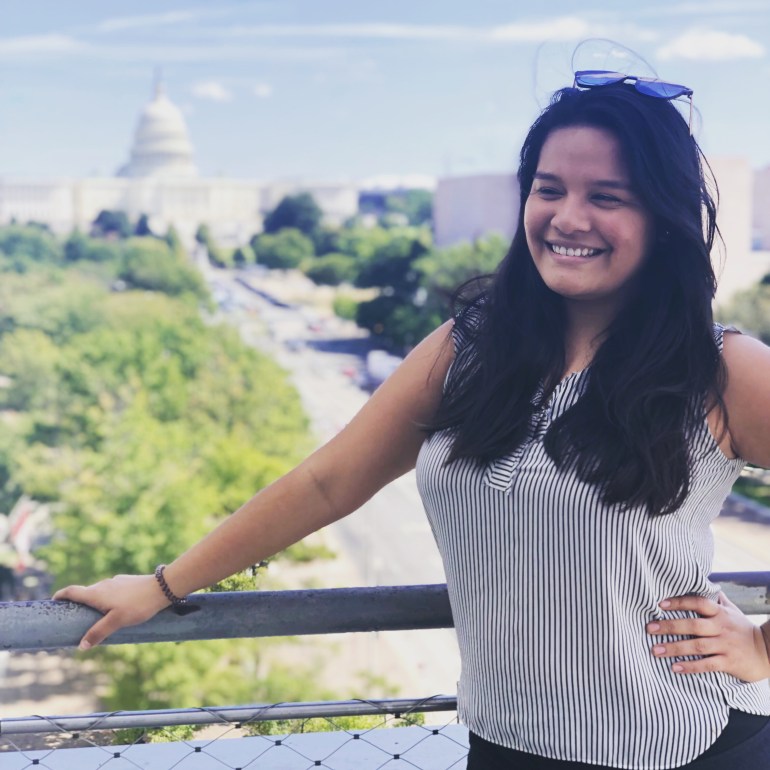 Voted in 2016 for: Hillary Clinton

Top Election Issue: Treatment of Migrants at the Border

“Oh 100 percent I will vote, and I will be voting because one, I think it’s one of the most important civic duties that we have as citizens, and two, a lot is riding on this vote in terms of rights for every kind of minority. And I fall into many categories of that, so it will be directly applicable to me.”

“Honestly, while climate change is a big one, for sure, that’s going to affect everyone. I think for me right now, it’s about migrants, and the horrible things that are happening to them at the border. The missing children, the abused women — all Latina. And history repeating itself in camps like that. That for me is a way more immediate and ongoing issue that needs to be addressed. And climate change is big. Don’t get me wrong, we’re all doomed [with] it. But I’m kind of caught between those two.”

“I will be voting for Joe Biden and Kamala Harris.”

“While he wasn’t my first choice, I do believe that this is still the winning horse. I think out of every other opposing party to the Republicans — as much as I don’t always agree with democratic ideals and principles, I do believe that they have the money and the power and the wherewithal to combat the structure that is the GOP, comparatively to any other third party — Libertarian, Green or whatever. It’s the best bet, even if you may not be 100 percent happy about it.”

Are you happy with the state of the country?

“I think most Americans’ answers would say no, and I would agree that there’s a lot to work on.”

“However, I am studying to be a foreign service officer one day. And what that means is that I’m going to have to go to other countries to promote America and our national interests. And so the stance that I took is that because I love and believe in this country and everything that it’s given to my immigrant family,  I think this country is still worth saving, even if I don’t particularly think that it’s in a good state right now.”

“This is very American of like, ‘pull yourself up by your bootstraps’, but also, the upside of that coin is we don’t care enough about your neighbour. And we need to make sure that we’re taking care of everyone, not just yourself. And so that’s going to come from education, that’s going to come from teaching kindness, open communications between every side of every spectrum. And so communication and education, I think are at the forefront of how we’re going to be able to heal as a country, as a people.”

“I mean, you can’t vote without a little hope that it will.

“At the very least, I don’t think that the people, the majority of people voting for Biden are thinking that he’s going to make any sort of radical change. I think they’re just hoping for things to go back to normal … As much as the Democrats hated the Bush era, there was still a piece of decorum and respect there for your fellow American — non-partisan American.

“And so I think a lot of people — while they’re not expecting any radical [Senator] Bernie [Sanders] change— they do want things to kind of calm down. This has been a really tough year, and I think everyone just wants to feel a little stable.”

What’s your biggest concern for the US?

“Honestly, domestic healing. If I can think of the United States as a person, they need to fix whatever is inside them first — like the dimensions of racism, the dimensions of minority rights, the dimensions of humanitarian rights that are not being met, for certain people at the border. Gay rights are under attack as well. Climate change is definitely up there as well.

“So we’ve got to fix ourselves first, as a country before focusing on our foreign policy, because I mean, I just read the news. You know, our constant communications with China, Europe, and the world — it’s not what we should be focusing on right now. We’ve got to fix ourselves before we can do any good outside. And I feel like I’m not the only one that thinks that way.”

Is there anything we haven’t asked about the election that you want to share?

“I would encourage people to stop hyping up the presidential elections, because a lot of their decisions aren’t going to directly affect you. Look up your local elections — who is representing your town, your district, your school board. These are the people that are going to directly affect how you get your water, your taxes for your town, how your kids are going to be educated, who is educating them. I wish there was more hype about that, rather than whatever squabbles and debates that are happening at the national level.

“So when you vote, please don’t just think it’s Trump versus Biden. Also look up your local people to take care of yourselves and your community, where you can make the biggest change.”