Peru’s Congress has chosen legislator Francisco Sagasti as the Andean country’s caretaker president, in an attempt to defuse a sharp political crisis after angry protests and the departure of two presidents in the past week.

People waved the nation’s red-and-white flag and blared horns outside the gates of Congress on Monday as the 76-year-old Sagasti, from the centrist Morado Party, won enough votes to head Congress. This means he will assume the presidency of Peru before national elections called for April.

Sagasti will be Peru’s third president in a week, after interim leader Manuel Merino resigned on Sunday, five days after being sworn in following the impeachment of centrist Martin Vizcarra.

The removal of Vizcarra, who was popular with many Peruvians but angered legislators with his push for anti-corruption measures and attempts to curb parliamentary immunity, sparked days of protests that led to the deaths of two men.

“Today is not a day of celebration,” Sagasti said, striking a sombre tone in his first words after taking office in Congress. “We cannot go back, bring them back to life, but we can take action from Congress, from the executive, so that this does not happen again.”

Sagasti, a former World Bank official and engineer, faces a formidable challenge to bring stability to Peru, which was already hard hit by COVID-19 and heading for its worst economic contraction in a century.

Al Jazeera’s Mariana Sanchez, reporting from the Peruvian capital, Lima, said Sagasti was set to be sworn in as the country’s interim president on Tuesday.

He received 97 votes in favour with 26 against, and is set to complete the current government’s mandate that ends in July 2021 and will include the holding of general elections on April 11.

“Sagasti’s Morado Party voted against Vizcarra’s impeachment and that’s the main reason he was elected as the new president of Congress,” said Sanchez.

“After the vote, he walked out of Congress with security guards and crossed the police lines to get close to a group of protesters who were outside the building waiting to hear the news of who would be the next president of Peru. He waved at them and they waved back. It’s a sign that he is telling young people, ‘I am with you.’”

Sandra Ramirez was in the crowd outside Peru’s Congress. She told The Associated Press news agency, “It couldn’t have been anyone else. We are going to hope for the best from him.”

“We trust in his capacity to guide the country through this crisis until the next presidential election,” Almagro wrote on Twitter.

Vizcarra also wished the new president well, “I congratulate Francisco Sagasti on his election as President of Parliament. Only a person with democratic principles will be able to face the difficult situation that the country is going through,” he tweeted.

Though the vote appeared to defuse tensions, underlying anger at police and elected legislators continued to simmer.

Protesters took to the streets to demonstrate peacefully in cities throughout Peru as night fell, though in smaller numbers than last week. Some rallied to congratulate Sagasti while others shouted and waved signs calling for a new constitution, or justice for those killed, wounded or still missing.

Television images showed the families of the two young men killed in the rallies last week gathering for their burial.

“I ask for justice for my children,” said Moraiba Sandoval, grandmother of one of those who died. She asked that the investigation into their deaths continue and the culprits be brought to justice.

Several human rights organisations in Peru have filed a complaint against Merino and a number of his former ministers for “qualified homicide, serious injuries and abuse of authority,” according to a joint statement.

“What’s at stake is taking a first step toward rebuilding confidence between the people and the state,” said Samuel Rotta, president of the Peruvian chapter of Transparency International.

“People on the streets, in their homes, on their balconies and on social media are very, very upset,” he told AP. “Peru is a country with high levels of mistrust. Politicians profoundly aggravated that.”

At the crux of the unrest are long-simmering tensions about corruption in Peru. Every living former president has been accused or charged — most in the massive Odebrecht graft scandal in which the Brazilian construction giant admitted to doling out millions to politicians in exchange for lucrative public works contracts. Meanwhile, half of Congress is also under investigation for crimes ranging from money laundering to homicide.

The recent crisis started when Vizcarra, an independent who had long clashed with Congress over his anti-corruption stance, was impeached and removed from office by legislators last week. It was the second impeachment Vizcarra had faced, after surviving the first attempt in September.

Legislators removed him using a 19th-century clause claiming he showed “permanent moral incapacity”. They accused him of taking more than $630,000 in bribes in exchange for two construction contracts while governor of a small province years ago. Prosecutors are investigating the accusations, but Vizcarra has not been charged. He has vehemently denied any wrongdoing.

The country’s highest court is currently evaluating whether Congress broke the law in removing him from office — a decision that experts said would not be retroactive, but could have implications going forward.

Merino – who, as president of the Congress, led the impeachments – succeeded Vizcarra. But he resigned after the protests escalated and as legislators threatened to impeach him unless he stood down. 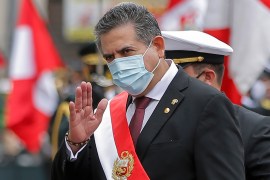 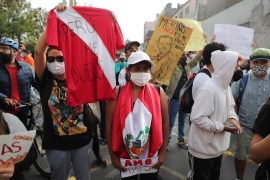 ‘I’m so tired of this’: Peru youth vow to remain on the streets

Mass protests have erupted across Peru this week after the country’s Congress removed President Martin Vizcarra. 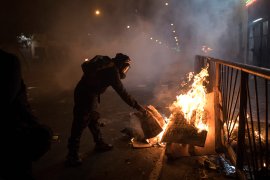 ‘Peru is fired up’: Protests erupt amid political crisis

Peruvians are protesting after President Martin Vizcarra was impeached over allegations he received bribes. 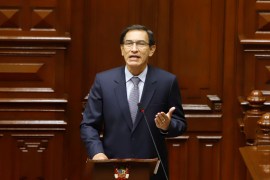 Martin Vizcarra says he will not challenge decision, as protesters take to streets to condemn impeachment.