Storm Iota unleashed torrential flooding in Central America on Tuesday, causing swollen rivers to burst their banks as it flipped roofs onto the streets, and downed electricity poles and trees, killing at least two people in the region.

The strongest storm on record to reach Nicaragua, Iota struck late on Monday, packing winds of nearly 155mph (249km/h) and flooding villages still reeling from the impact of Hurricane Eta two weeks ago.

By midday (18:00 GMT), the winds had fallen to 65mph (105km/h) as Iota weakened to a tropical storm, the US National Hurricane Center (NHC) said. But it continued bringing down heavy rains as it moved inland towards southern Honduras.

“We’re flooded everywhere, the rain lasted almost all night and now it stops for an hour, then comes back for two to three hours,” said Marcelo Herrera, mayor of Wampusirpi, a municipality in the interior of northeast Honduras crossed by rivers and streams.

“We need food and water for the population, because we lost our crops with Eta,” he told news agency Reuters.

Iota marked the first time two major hurricanes have formed in the Atlantic basin in November since records began. The Nicaraguan port of Puerto Cabezas, still partly flooded and strewn with debris left by Eta, again bore the brunt of the hit.

“We could die,” said one such local, Inocencia Smith. “There is nothing to eat at all,” she added, noting Eta had shattered local farms.

The wind tore the roof off a makeshift hospital. Patients in intensive care and others were evacuated, including two women who gave birth during the first rains of the storm on Monday, Vice President Rosario Murillo told a news conference.

Guillermo Gonzalez, head of Nicaragua’s disaster management agency SINAPRED, said first reports from the region indicated there had been damage to houses and roofs, fallen power lines and overflowing rivers. No deaths were reported, he said.

Unlike neighbouring countries, Nicaragua’s government did not register deaths from Eta, although the storm killed at least two people there, according to local media reports.

Iota passed close to Providencia, one of a cluster of islands in Colombia’s Caribbean province of San Andres. Local authorities reported at least one death there.

“We have a critical situation in Providencia,” Colombian President Ivan Duque told local radio on Tuesday morning. “Many people have lost everything.” As much as 98 percent of the island’s infrastructure may be destroyed, Duque added.

Panama’s government said a person had died in its western Ngabe-Bugle region due to conditions caused by the storm.

A resident of Brus Laguna on the Honduran coast told local radio that a boy was killed by a falling tree, although the mayor, Teonela Wood, said she had no reports of fatalities.
The International Federation of Red Cross and Red Crescent Societies (IFRC) said Iota risked causing disaster after Eta.

“We are very concerned about the potential for deadly landslides in these areas as the soil is already completely saturated,” IFRC spokesman Matthew Cochrane told a media briefing in Geneva on Tuesday.

About 40,000 people in Nicaragua and 80,000 in Honduras were evacuated from their homes, authorities said.

By early afternoon, Iota was about 105 miles (169km) east of the Honduran capital Tegucigalpa, the NHC said.

The NHC said Iota could dump up to 30 inches (76cm) of rain in some areas, compounding damage wrought by Eta.

“We are in the hands of God. If I have to climb up trees, I’ll do it,” said Jaime Cabal Cu, a farmer in Guatemala’s Izabal province.

“We don’t have food, but we are going to wait here for the hurricane that we’re asking God to stop from coming.” 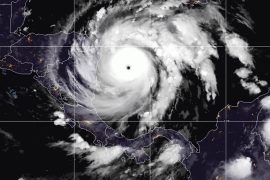 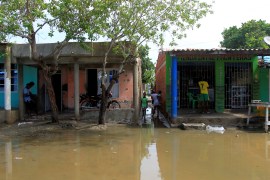 Hurricane Iota damages 98 percent of the Colombian island’s infrastructure and one person has died. 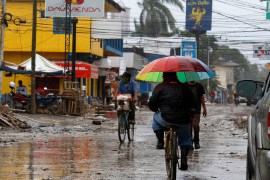 Hurricane Iota roars onto Nicaragua as 2nd blow in 2 weeks

It is carrying hurricane-force winds over northern Nicaragua and is expected to cross southern Honduras by the evening.