Coming to power on a wave of optimism in April 2018, Ethiopian Prime Minister Abiy Ahmed was at the time cautiously seen as a remedy to decades of effective one-party rule with his promised programme of radical reform.

But now, as nearly two weeks of deadly fighting between the federal government and a defiant northern leadership that for decades dominated Ethiopia’s politics intensifies, the future of the country balances on a knife edge.

After weeks of secretive negotiations within the EPRDF, Abiy is believed to have overcome opposition from the formerly dominant Tigray People’s Liberation Front (TPLF) to win the EPRDF’s chair and become, at 41, Africa’s youngest leader and Ethiopia’s first from the Oromia region.

The appointment of Abiy – founder of the country’s Information Network and Security Agency, former minister for science and technology and an ex-lieutenant-colonel in the army – was seen as crucial at quelling unrest among the Oromo, the ethnic group behind the years of anti-government protests that led to thousands of deaths.

“There were a lot of problems before Abiy became prime minister, the major one being the government’s inability to deliver development promises,” said Daniel Mulugeta, an expert on Ethiopia at London’s School of Oriental and African Studies. “Abiy capitalised on that political playing field. He promised to heal the divisions in the country and to fight corruption and he emerged as a beacon of hope for all Ethiopians at the time.”

William Davison, senior analyst for Ethiopia at the International Crisis Group (ICG), said “it’s important to understand the EPRDF admitted the game was up and wouldn’t be able to crush this protest movement in their usual fashion, and therefore a process of reform and political liberalisation was initiated before Abiy Ahmed came to office”.

Early signs were of apparent progress, with the new prime minister accelerating the reform measures announced in the dying days of his predecessor’s government. Upon assuming office, Abiy went on to lift Ethiopia’s state of emergency, ordered the release of prisoners and unblocked hundreds of websites and TV channels, while his move to secure peace with neighbouring Eritrea resulted in him being awarded the Nobel Peace Prize in 2019.

Those economic plans, however, have yet to bear fruit for the ethnically diverse country of 110 million people, Africa’s second most populous, and analysts say Abiy’s support has begun to wane amid rising ethnic tensions, persisting poverty and the recent effects of devastating floods, a locust invasion and the coronavirus pandemic.

“When it comes to the critical mass, he’s losing support,” said Mulugeta. “Abiy doesn’t seem to have a very clear policy agenda. He prefers quick, instant development projects that please his followers. He’s pragmatic. What you see in him is what you see in populist leaders like Boris Johnson and Donald Trump.”

To compound matters, in the year since Abiy became a Nobel laureate, hundreds of Ethiopians have died either in violent clashes with security forces or between Ethiopia’s various ethnic groups. Notably, the killing in June of prominent singer Hachalu Hundessa, a champion of the Oromo, led to deadly protests. Thousands of politicians, opposition activists and anti-government protesters, meanwhile, have been arrested.

“We thought he was going to be a unifying figure to a deeply fractured society,” said Tsedale Lemma, editor-in-chief of the Addis Standard, an Ethiopian English-language publication. “But it’s been one deadly decision after another. He’s not a peacemaker and it’s been so asymmetrical.”

But some argue the crackdown is partly the result of Abiy’s earlier moves to open up and that by freeing Ethiopian opposition and rebel groups, long-suppressed rivalries in regions such as Amhara, Oromia and Tigray have been unleashed.

“He tried to take a centrist position, going away from extremist political positions,” said Asnake Kefale, assistant professor of political science at Addis Ababa University. “Ethno-nationalists were one end of the spectrum and pan-Ethiopianists on the other. But the ethno-nationalists accused him of targeting them and problems have started.”

Among those who accused Abiy of unfairly targeting them was the TPLF as Abiy began purging Tigrayans from senior leadership positions, including in the military and security services, after taking power. The TPLF then withdrew from the EPRDF after Abiy merged it into the newly-formed Prosperity Party.

Tensions reached a flashpoint when Abiy postponed national elections until next year due to the pandemic and Tigray went on to hold its own local vote in September despite the central government in Addis Ababa deeming it illegal.

Abiy responded by declaring a state of emergency and on November 4 he launched a military operation in Tigray after an alleged attack on a federal army base. Last week Amnesty International said scores of civilians were killed in a “massacre” in Tigray that witnesses blamed on forces backing TPLF and thousands have since fled to Sudan amid the growing humanitarian disaster.

Opinion is divided over to what extent Abiy is culpable for the escalation of violence in Tigray. “In my view, for six to seven months Abiy has been tolerant and trying to avoid military confrontation,” said Kefale, of Addis Ababa University.

But other analysts are less convinced. “This is not all down to the prime minister, by any means, but we can see aspects that have not been that well handled,” said the ICG’s Davison. “Abiy seems to rely on his own judgement rather than lengthy decision-making processes. Perhaps that doesn’t lend itself towards the more pluralistic approach to government that would mark a radical departure for Ethiopia.”

Critics argue that in order to heal the gaping divisions across the country, Abiy must shift his style of rule to be more participative and to temper his efforts to centralise. “It’s a moment of reckoning,” said Lemma, of the Addis Standard. “He needs to facilitate an all-inclusive dialogue. That’s how a government should act with its mandate.”

What is certain is Abiy’s failure to foster peace at home raises questions about the ability of Ethiopia to thrive economically and to peacefully transition into democracy in the way some had dreamed two and a half years ago.

“The Tigray conflict is going to complicate the future of the country,” said Mulugeta, of SOAS. “The war is likely to augment Abiy’s power and create more polarisation in the country. My concern is that this could create a humanitarian catastrophe.” 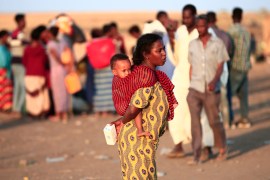 No immediate indication assault in Benishangul-Gumuz region is linked to escalating conflict in northern Tigray region. 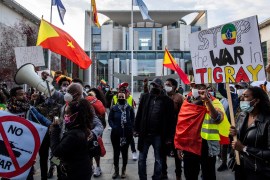 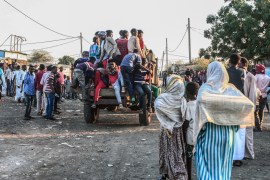 Sudanese officials say they are doing what they can to support the sudden influx of refugees.