Turkey’s President Recep Tayyip Erdogan has said on a controversial visit to Northern Cyprus that talks about the divided island should aim for a settlement between “two separate states”.

Talks in the past have aimed for a reunification of the Mediterranean island, which is split between the Greek-speaking Republic of Cyprus, a European Union member with control over the island’s southern two-thirds, and the north occupied by Turkey since 1974.

“There are two peoples and two separate states in Cyprus,” Erdogan said on Sunday.

“There must be talks for a solution on the basis of two separate states.”

The EU, which has threatened to impose sanctions on Turkey next month over its oil and gas exploration activities in the Eastern Mediterranean, admitted Cyprus into the bloc in 2004.

Erdogan’s visit to Northern Cyprus, recognised only by Ankara, comes at a time of heightened tensions on the island and in the Eastern Mediterranean and was condemned as a “provocation without precedent” by the Republic of Cyprus.

The Turkish president visited the disputed beachfront area of Varosha along the UN buffer zone that has divided the island since Turkey’s invasion.

An eventual reunification of Cyprus has looked more remote since an Erdogan-backed Turkish nationalist, Ersin Tatar, was elected leader of the north last month.

Turkey’s government said Erdogan and Tatar would discuss how to strengthen ties and also the situation in the broader eastern Mediterranean.

The last UN-sponsored peace talks, based on the reunification of the island, failed in 2017.

Erdogan visited on Sunday to mark the anniversary of the self-proclaimed Turkish Republic of Northern Cyprus (TRNC), and visited Varosha, a long-abandoned beach resort that was once the playground of celebrities and dubbed a “jewel of the Mediterranean”.

The Turkish invasion – launched in response to an Athens-engineered coup in Nicosia designed to unify Cyprus with Greece – was followed on November 15, 1983 by the declaration of the TRNC.

Since then, Varosha has been a fenced-off ghost town, where former luxury hotels and restaurants have fallen into disrepair and overgrown by weeds and bushes.

Cyprus President Nicos Anastasiades condemned Erdogan’s visit, as well as what he called the historical “secessionist act of the declaration of the illegal regime” in the north.

He said Erdogan’s visit served to “torpedo” UN-led efforts to work toward resolving “the Cyprus problem” in talks between Greek and Turkish Cypriots, Athens, Ankara and former colonial power London.

Erdogan’s increasingly assertive stance has sparked protests in the Greek-speaking south – but also in the north, where many Turkish Cypriots resent Ankara’s interference in the island’s politics.

“No interference! Freedom for all!” hundreds of Turkish Cypriot protesters chanted in northern Nicosia on Tuesday to denounce Erdogan’s visit. 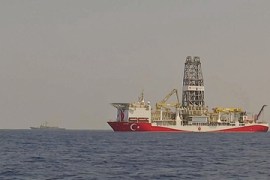 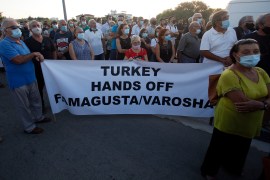 Greece says if Turkey does not reverse reopening part of Cypriot ghost town, it may seek to trigger economic sanctions. 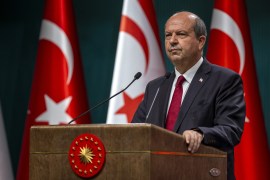 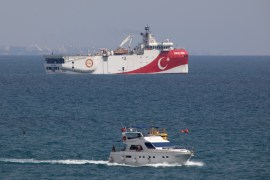 EU has failed to persuade Ankara to stop exploring disputed waters, as Turkey claims it is acting within law.