A top official in South Africa’s governing African National Congress (ANC) has been granted bail in a corruption case that has highlighted divisions within a party whose dominance has been unchallenged since the 1994 end of white-minority rule.

Secretary General Ace Magashule was not asked to plead in his first court appearance on Friday, where he faced 21 charges of corruption and fraud, but has previously denied any wrongdoing.

Magashule is accused of stealing public money set aside to audit government houses with asbestos roofs in 2014, when he was premier of the Free State province.

The allegations revolve around the equivalent of $16.4 million (13.9 million euros) in asbestos audit contracts awarded during ex-president Jacob Zuma’s graft-tainted tenure of 2009-2018.

The hazardous roofs were never removed, leading investigators to believe that more than $12 million had been pocketed.

Seven other suspects have been arrested and granted bail in connection to the case, which has now been adjourned to February 19.

The charges have put Magashule on a collision course with President Cyril Ramaphosa, who has pledged to clean up the ANC’s image with a tough stance on corruption, but whose detractors accuse him of using it to sideline his opponents.

“We expect to add three more accused on the charge-sheet,” the National Prosecuting Authority said in a statement.

Outside the court, thousands of supporters denounced the trial as a witch hunt, chanting, dancing and waving banners reading “Hands off Comrade Magashule”, footage from national TV channels showed.

After appearing, Magashule, who had handed himself into police earlier in the day, stepped outside to address the crowd. “I will only step aside if I am asked by the branches who voted me,” he said, to loud applause.

Some protesters tried to tear down a barbed wire cordon around the court while others burned yellow ANC T-shirts bearing Ramaphosa’s face, calling on him to step down.

“If you arrest Ace Magashule, you arrest the whole ANC!” one demonstrator shouted.

Al Jazeera’s Fahmida Miller, reporting from Bloemfontein, said the demonstrations were an indication of the split within the ANC.

“Cyril Ramaphosa is facing an enormous divide within his own party, people who are fighting for their own political survival,” she said.

“Ramaphosa said he was going to fight corruption. But that fight is likely to take place within his own party to begin with.”

Magashule is the most high-profile politician to be tried since former president Zuma, whose trial on corruption charges resumes in December.

Magashule is from a faction within the governing party that has pushed for radical economic transformation and has at times appeared at odds with the Ramaphosa since he replaced Zuma as head of state in February 2018.

The ANC has not asked Magashule to step down because of the allegations.

Speaking on state broadcaster SABC, ANC deputy secretary-general Jessie Duarte warned Magashule supporters, “While we are supporting (him), we should not do so by destroying the very movement that we want to change this country”. 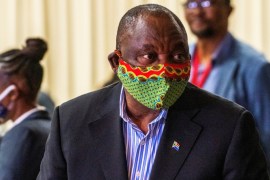 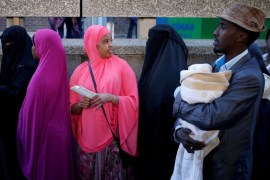 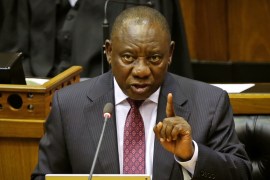 President Ramaphosa rejects claims by pressure groups that a spike in attacks on white farms is ‘ethnic cleansing’. Zuma, who became president in 2009, was forced to resign in February 2018 over corruption scandals.