As winter approaches each year, a haze of toxic smog envelopes vast swaths of northern India, including the capital New Delhi, forcing authorities to shut schools and restrict the use of private vehicles.

In the past 48 hours, the Air Quality Index hovered at above 475 on a scale of 500, near “emergency” levels, according to the federal monitoring agency SAFAR.

The index measures levels of airborne PM2.5 – tiny particles that can be inhaled into the lungs, causing deadly diseases, including cancer and cardiac problems.

Anything above 60 is considered unhealthy.

Why air quality dips in winter

Air quality starts deteriorating by the end of October when lower temperatures, higher moisture and a drop in wind speeds tend to trap pollutants in the atmosphere for longer.

After the monsoon season ends in September, the wind direction also changes.

Along with burning rubbish, the cold weather forces people, especially those spending the night in the open, to burn small fires to keep warm, adding to the smog.

Rapid urbanisation and shrinking forests have compounded the problem.

Unlike southern parts of the country, most arid regions of northern India, including New Delhi, struggle with dust, a common air pollutant. Environmental experts say New Delhi’s topography hobbles efforts by authorities to stave off the spike in pollution. 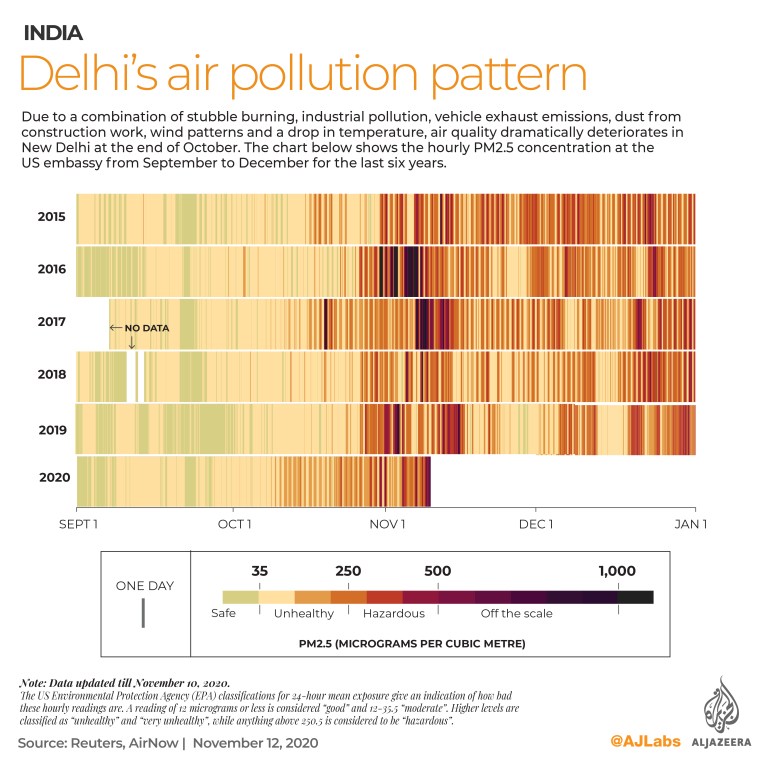 Also, large scale mining for rocks and sand, used in construction, has hollowed out the Aravalli mountain range, a natural barrier that used to protect New Delhi from dust coming from the Thar Desert.

Activists warn the fast disappearance of the Aravalli range will make New Delhi more vulnerable to its pollution woes.

In recent years, the problem has been exacerbated by the burning of crop residues in Punjab and Haryana states, part of the farm belt that borders New Delhi.

Unlike manual harvesting, mechanised harvesters leave stubble and rice paddy straw in the field. Disposing of crop waste is time-consuming. After harvesting rice, farmers get only a short window to plant winter crops such as wheat and rapeseed, and late sowing means lower yields.
So farmers find it much cheaper to burn the residue, which accounts for about a quarter of air pollution.

In 2018, India earmarked $177.61m for two years to give farmers a subsidy to buy equipment, such as mulching and seed drilling machines, that dispose of crop waste without burning it.

For the 2020-2021 fiscal year, the government allocated $746m in farm equipment subsidies. Farmers say lengthy bureaucratic processes to claim the subsidies forces them to burn their crop waste.