Saeb Erekat, a familiar face in Palestinian politics for 40 years, has died from the novel coronavirus, said Palestinian party Fatah. He was 65.

Erekat, a veteran peace negotiator and prominent international spokesman for the Palestinians for more than 30 years, died weeks after testing positive for COVID-19, the respiratory disease caused by the novel coronavirus.

In a statement, Palestinian Authority President Mahmoud Abbas said: “The departure of a brother and a friend, of the great fighter, Dr Saeb Erekat, is a great loss for Palestine and our people, and we are deeply saddened.”

The senior Palestinian official’s infection was complicated by a history of health issues. He underwent a lung transplant in 2017 and suffered from a weak immune system and a bacterial infection in addition to COVID-19.

Erekat witnessed tumultuous events from an early age. He was 12 years old when Israeli tanks rolled into his hometown of Jericho.

In 1967, he witnessed a war that would last just six days, but which shaped the entire Middle East in the decades since. For Erekat, it would inform the decisions he made for the rest of his life.

Erekat said he had to grow up quickly under Israeli occupation in the West Bank. His first arrest at the age of 13 was not his last.

He attended university in the United States and moved to England to complete a PhD in conflict resolution. It was the beginning of his fight for Palestinian statehood through negotiation – advocating a two-state solution based on the 1967 borders.

It was a compromise and a major concession. But throughout his life, Israelis would accuse him of being an “extremist” and sowing division, while Palestinians would call him a traitor to the Palestinian cause, giving away too much.

Erekat was one of the Palestinians’ most recognisable faces over the decades, serving as a senior negotiator in talks with Israel and making frequent media appearances. He was also a senior adviser to Arafat and current President Mahmoud Abbas.

At the Madrid peace talks in 1991, he insisted on wearing the Kuffiyeh, the symbol of Palestinian national identity. He was a hero to many back home, but at the conference, it caused a stir.

Two years later, he was left out of final talks on the Oslo Accords – negotiated by then-Palestinian leader Yasser Arafat.

But Erekat would rise to become the chief Palestinian negotiator in 1995. Over the years, he resigned from the post several times before eventually being reinstated.

Controversy surrounded Erekat with the 2011 publication of the Palestine Papers by Al Jazeera.

The leaked documents included more than 1,600 confidential records of meetings, emails, and communications between Palestinian, Israeli and US leaders covering the years 2000-2010.

The documents also detailed huge concessions offered by Palestinian officials to the Israeli government, without securing Israeli guarantees on key issues such as occupied East Jerusalem and the fate of refugees.

Erekat resigned after the papers quoted him as boasting of offering the Israelis “the biggest Yerushalayim [the Hebrew word for Jerusalem] in history” –  which entailed the annexation of all major Israeli settlements except for one in East Jerusalem. Under international law, Israeli settlements are illegal.

His strength was as the public face for the Palestinian cause, communicating across language barriers to explain their position to the English-speaking world, while also being an acceptable voice of the Palestine Liberation Organization (PLO) to Israel.

But over the years he described a growing pessimism – at Israel’s failure to deliver on its undertakings; at the building of yet more illegal Israeli settlements; increasing numbers of checkpoints; brutality against Palestinians; and the Israeli separation wall now more than 700 kilometres (430 miles) long.

The peace talks – he would say – were out of sync with the reality for Palestinians on the ground.

He remained loyal to Arafat, even through his power struggle with Abbas, and held on to his seat in the 2006 election, which Hamas won by a landslide.

But as Israel imposed a blockade on the Gaza Strip the following year, and waged three offensives on the coastal enclave, the chances for an agreement waned.

Erekat described it as the “new dark age” saying leaving the Middle East’s most emotive conflict unresolved was simply fueling a regional descent into chaos and violence.

He turned his attention to the United Nations and was instrumental in the successful campaign to gain observer status for the State of Palestine within the UN. It was part of a strategy to force Israel to face trial at the International Criminal Court (ICC) as an occupying force.

Throughout, Erakat remained convinced the two-state solution based on the 1967 borders was still possible.

“To those who want to bury the two-state solution, [what is] the real alternative to a two-state solution, the real alternative to the State of Palestine living side by side with the State of Israel in peace and security on the 1967 lines as one democratic secular state where Jews, Muslims, Christians can live with equal voice,” Erekat said in February 2017.

“Those who believe they can undermine the two-state solution and replace it with what I call one-state, two Systems, maintaining the status quo now, apartheid, I don’t think in the 21st century they will get away with it. It’s impossible.”

In August, Erekat was among the most critical voices of the US-sponsored “normalisation deals”, which saw the United Arab Emirates and Bahrain establish full ties with Israel. He described the deal as “the birth of Arab Zionism”, accused the US, the UAE and Israeli leaders of “killing the two-state solution” and called the agreement “a poisoned dagger stabbed into the Palestinians’ back”.

Erekat fought for a deal between Israelis and Palestinians for decades, but in his last few years was fighting his own battle – lung disease kept at bay by an experimental drug. Eventually, he would need a transplant of both lungs, a dangerous condition for patients with coronavirus, to which he eventually succumbed.

In 2007 he said he would hate to be a grandfather living under Israeli occupation. He was not able to change that. 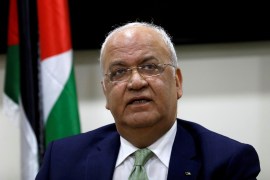 Saeb Erekat, longtime spokesman for the Palestinians, dies at 65

Veteran negotiator and prominent spokesman for the Palestinians died after being infected by coronavirus. 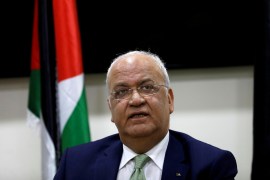 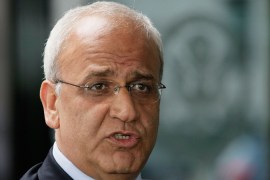 Saeb Erakat, the senior PLO leader, has been isolating after testing positive for the COVID-19. 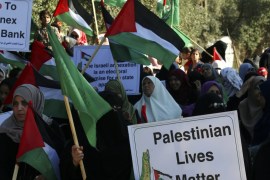 Palestinians have resisted Israeli occupation and colonisation for decades. But erasure is still a looming threat.