Police in Quebec City arrested a man on suspicion of killing two people and wounding five others in a stabbing rampage near the provincial legislature on Halloween.

The man, in his mid-20s, was arrested on Saturday in connection with the Halloween-night attacks and taken to a hospital “for evaluation”, police spokesman Etienne Doyon said.

“It’s a man who was dressed medieval. It’s a man who carried a sword with him. It’s stab wounds – that’s all we can tell you at the moment,” said Doyon.

Police later said the suspect was “not associated with a terrorist group”.

Police had earlier warned residents to remain indoors as they hunted for the attacker, who was dressed in medieval clothing and armed with a bladed weapon and left “multiple victims”.

According to three witnesses quoted by Quebec newspaper Le Soleil, the attacker killed his first victim near the Chateau Frontenac hotel and there was “a lot of blood”.

The man then continued on Rue des Remparts, where the second person was killed, before heading to the Old Port, wounding the other victims, according to the newspaper.

The five wounded victims were taken to a hospital, and a spokeswoman said their lives did not appear to be in danger.

“According to our initial information, nothing indicates to us that the suspect acted for anything other than personal motivation,” police said in a tweet.

The suspect was lying on the ground, barefoot and hypothermic, when he was arrested, Le Soleil reported.

He was wearing a black mask and surrendered to police, according to the newspaper, which said he had been planning his attack for a year and a half.

Quebec resident Karin Lacoste said she was going to a convenience store to do some shopping around 11 pm when she saw several armed police officers wearing bulletproof vests.

“There was one who told me ‘run to your home because there is someone walking around, he is a killer and he has killed people,'” she told LCN news channel. “I was really scared.”

The suspect was arrested shortly before 1am near the Old Port. He was then “checked” and “transported to hospital for evaluation”.

“On behalf of the Quebec City police, I want to offer my sincerest condolences to the loved ones and families of the people who died today,” Doyon said.

Translation: ATTENTION: Shortly before 1 am, the SPVQ arrested a suspect | We still ask the citizens of Quebec City to stay inside with the doors locked as an investigation is ongoing. – Quebec City Police Department 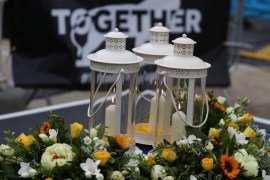 Khairi Saadallah faces three counts of murder and three of attempted murder over the June 20 attack in Reading. 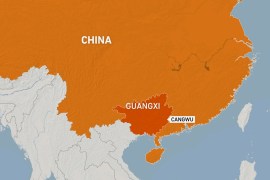 A number of schools in China have been hit by attacks in recent years, forcing authorities to step up security. 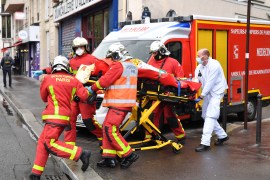 Arrests made over attack which comes as trial over deadly 2015 assault at satirical newspaper under way.