US President Donald Trump said on Thursday he would not participate in a debate with Democratic presidential hopeful Joe Biden under a new format announced Thursday by the debates commission in which each candidate would appear at remote locations.

The Biden campaign responded with a request that the Presidential Debate Commission move the October 15 Biden-Trump town hall a week later “so that the President is not able to evade accountability”, Campaign Manager Kate Bedingfield said in a statement.

Soon after, the Trump campaign concurred with the suggestion and said the third debate between the two candidates should be moved to October 29.

The Biden campaign has rejected that saying the three debate dates had been agreed in June.

“Trump chose today to pull out of the October 15th debate,” Bedingfield said in a statement.

“Trump’s erratic behavior does not allow him to rewrite the calendar, and pick new dates of his choosing,” the statement read, saying October 22, would be the final debate.

Earlier on Thursday, in an interview with Fox Business Network’s Maria Bartiromo, Trump had said the new virtual format announced by the Commission on Presidential Debates was not acceptable to him.

“I’m not going to do a virtual debate,” he said soon after the rule changes were announced.

Bill Stepien, Trump’s 2020 campaign manager said in a statement that “President Trump won the first debate despite a terrible and biased moderator in Chris Wallace, and everybody knows it.

“For the swamp creatures at the Presidential Debate Commission to now rush to Joe Biden’s defense by unilaterally canceling an in-person debate is pathetic. That’s not what debates are about or how they’re done,” Stepien, who also tested positive for COVID-19 earlier this week, said.

“We’ll pass on this sad excuse to bail out Joe Biden and do a rally instead.”

The commission said the debate, scheduled for October 15, would see the audience – who typically ask the candidates questions in a town-hall meeting format – and moderator Steve Scully gathering in one location in Florida, Miami’s Adrienne Arsht Center for the Performing Arts.

The decision was made “to protect the health and safety of all involved,” the commission added.

“I don’t know what the president is going to do. He changes his mind every second,” Biden said Thursday before departing for a day of campaigning in Arizona. “For me to comment on that now would be irresponsible. I think that if I can follow the commission’s recommendations — if he goes off and has a rally, I’ll — I don’t know what I’ll do.”

Last Thursday, Trump tested positive for COVID-19, raising concerns that he had infected Biden and moderator Chris Wallace during the first debate on the preceding Tuesday. Biden has tested negative.

The president said on Thursday he is feeling good enough to resume campaigning and he does not believe he is contagious.

“I’m back because I’m a perfect physical specimen,” Trump told Bartiromo in his first interview since it was revealed nearly a week ago that he had tested positive for the coronavirus.

Trump’s contention he was no longer contagious was not yet backed up by solid evidence from his doctors. The White House has refused to say when his last negative test for the virus was and, as a result, it is unclear how long he has been positive.

The Republican president is under pressure to actively campaign again to try to inject new energy into his reelection bid as he faces a deficit in opinion polls in battleground states with Election Day now less than four weeks away.

“I’m feeling good, really good,” said Trump, who spent three nights being treated at a military hospital outside Washington until his discharge on Monday. Trump said he had stopped taking “most therapeutics” for the virus but was still on steroids.

Doctors had said he was taking the powerful steroid dexamethasone, which the World Health Organization said was “found to have benefits for critically ill patients”.

With layoffs in key sectors increasing doubts about the fragile economic recovery, Trump said he called off negotiations with Congress for a fresh round of stimulus for the ailing economy because they were not going anywhere.

But he said some discussions are ongoing with Democrats about boosting support for US airlines and providing Americans with $1,200 stimulus checks.

Trump has faced criticism for underestimating the novel coronavirus, which has killed more than 210,000 Americans and thrown millions out of work. Even since revealing his own illness on Friday, Trump has downplayed the respiratory disease’s dangers and been censured by social media platforms for spreading misinformation about it.

“I think this was a blessing from God that I caught it. This was a blessing in disguise,” Trump said in a video posted to his Twitter account on Wednesday, adding that his use of an experimental medication from Regeneron Pharmaceuticals Inc had allowed him to experience first-hand how effective it could be.

He vowed to make the treatment available free of charge, but did not say how he would do that or who would pay the cost of the treatments. The United States is currently reporting more than 44,000 new COVID-19 infections each day.

The Fox Business Network interview was conducted over the phone. Trump himself has not been seen in public since he arrived back at the White House from the hospital on Monday night, although he has released video recordings.

Despite his illness, Trump has been looking for ways to get his election message out and cut into Democratic presidential nominee Joe Biden’s lead in battleground states, advisers said.

Aides said Trump was impatient to return to campaigning and insistent on going ahead with the second presidential debate in Miami, although Biden said on Tuesday he would not participate if Trump was not virus-free.

Trump has had no COVID-19 symptoms for the past 24 hours, his doctor, Sean Conley, said in a statement on Wednesday

“He’s now been fever-free for more than four days, symptom-free for over 24 hours, and has not needed, nor received, any supplemental oxygen since initial hospitalization,” Conley said. 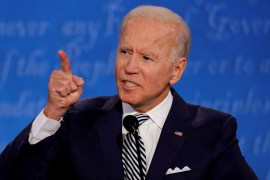 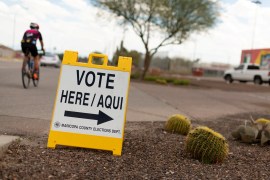 The economy and the coronavirus are top issues on Arizona voters’ minds, and immigration is a factor too. 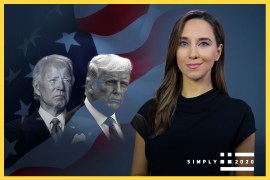 How do the US elections work? | Start Here

The US presidential election is just around the corner but there’s a lot more at stake than just the White House.