Beirut, Lebanon – For more than two months, Lebanon has been sliding into a worsening coronavirus outbreak that is now threatening to overwhelm the country’s fragile healthcare system.

More than half of the country’s 48,377 cases and 433 deaths occurred in the past month alone, according to a tally by Johns Hopkins University.

For the first few months of the outbreak, crisis-hit Lebanon introduced a total lockdown that kept daily cases in the single or low double-digits.

But health policy experts say the absence of a long-term strategy and poor implementation of the country’s post-lockdown reopening are largely to blame for the sharp recent increase in cases.

“Obviously given our history, we in the Arab world know how to do lockdowns very well,” Firas Abiad, the director of the country’s prime coronavirus treatment facility, Beirut’s Rafik Hariri University Hospital, told Al Jazeera.

“What we don’t know how to do is ease a lockdown, to give subsidies and incentives to people and businesses. We don’t have any of that.”

As the number of new cases spike, deep mistrust of the government, coupled with poor communication and sometimes-contradictory policies, mean new measures have often been resisted and flouted.

Experts say Lebanon now has to move decisively to contain an outbreak that could bring more misery to a population that this year has already suffered the effects of an economic collapse and the huge port explosion on August 4, which left some 200 people dead, 6,500 wounded and 300,000 homeless.

There will be no quick fix anytime soon. Assem Araji, the head of Parliament’s health committee, told Al Jazeera he expected a COVID-19 vaccine would arrive in Lebanon by mid-2021 at the earliest, even if production abroad begins at the end of this year.

From lockdown to uptick

When Lebanon recorded its first cases in late February, the country quickly moved towards lockdown. There was big public buy-in from a population that feared their politicians would mismanage this crisis just as they had done with so many others in the country.

Lebanon in the past year has been sucked into a maelstrom of economic and political turmoil that has left more than 50 percent of the population below the poverty line while the country’s notoriously fractious politicians have resisted implementing much-needed reforms.

But by April, cracks had begun to show. Scattered protests took place as the government fumbled the provision of meagre aid to the families most in need during the lockdown. “We want to eat, we want to live,” was a popular chant.

The provision of aid was so delayed its dollar-value was sliced almost in half between the time it was announced and the time it began being distributed, as the currency depreciated.

Cases were frequently in the double digits by May.

By mid-June, Lebanon had completed a staggered reopening process and in early July, the airport reopened. Confirmed cases quickly began regularly exceeding 100 a day by mid-July as quarantine regulations were ignored.

“While testing capacity expanded in this time period and initial response, one might argue there were little other protective measures in place once the phased approach was complete,” Sara Chang, a Beirut-based public health consultant told Al Jazeera.

“The number of daily domestic cases continues to rise. This is due in part to the multiple crises faced by residents of Lebanon, who have already been dealing with a financial crisis, political instability, and fallout from the Beirut explosion for months on end,” she said.

Joelle Abi Rached, a public health researcher and co-founder of the Independent Lebanese Committee for the Elimination of COVID-19, a watchdog group, said the spike in cases was tied to a lack of strategy and poor execution of protective measures. Nor was rigorous tracing of those who came into contact with active cases implemented, she said.

Araji countered that officials had initially done well. He pointed instead to the August 4 Beirut blast, saying it “caused people to mix and hampered our efforts to contain the virus”.

Though cases had been steadily rising before the blast, it is true that protective measures largely went out of the window as people worked to remove family, friends and strangers from the rubble of their city, and medical professionals provided them with care in overwhelmed hospitals.

In the aftermath of the blast, daily cases shot up to the mid-to-high hundreds, then up to more than 1,000 later in August.

An attempted lockdown in late August was ended due to public pressure.

The latest attempt, announced in early October, to lock down only areas with a high number of cases, known as “green-zoning”, partially relied on misleading data and Health Minister Hamad Hasan has admitted “some errors”.

Other policies have been incoherent or poorly executed, Abiad said.

“Some labs are basing results on where people are from on their IDs, while other hospitals do place of residence,” Abiad explained.

“Meanwhile Beirut – the place with the highest number of cases – is not under lockdown, but a place like [the remote village of] Ferzol is under lockdown because it has five cases. Why?”

Abiad said the RHUH was at more than 90 percent capacity as of Wednesday, with a similar situation at other hospitals across the country.

According to Araji, out of a total of 14,000 beds at its public and private hospitals, Lebanon has set aside some 900 for COVID-19, of which about 220 are for intensive care.

Araji said health officials were in the process of adding 300 beds, 150 of which should be ready within a month.

But Abiad warned there may not be enough medical staff to manage those beds due to the sheer volume of cases and the high infection rate among medical workers.

“This is going to be the ultimate question – where are the trained nurses who can take care of these patients, because as of now they are going from hospital X to hospital Y. It’s not sustainable,” he said.

Although the situation is grim now, health experts generally concur on what must be done to curb the spread of the virus.

“It’s not acceptable that people are still giving wrong info about corona after all that has happened,” he said.

Next up is compliance – penalising those who do not wear masks and businesses that fail to abide by regulations. With the coronavirus, short-term pain has been shown to lead to long-term gains, Abi Rached said.

She added that contact-tracing must be strengthened, and suggested that groups of local volunteers could participate in exhaustive tracing efforts, while increased hospital capacity, often portrayed as the most important measure, should be seen as the last line of defence.

“Give more power to local communities,” she said. 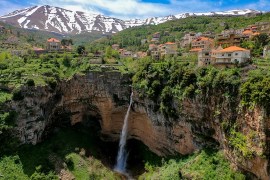 Over the past two weeks, almost 10 percent of Lebanon’s total coronavirus cases have been recorded in Bsharre. 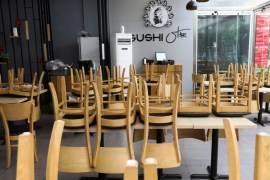 Lebanon has 870 confirmed cases, but more than 100 of those were registered in just the past four days. 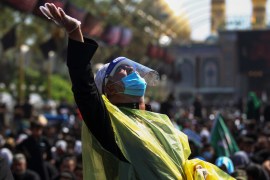 In Pictures: How Ashoura was marked amid coronavirus restrictions

Typically, millions from around the world flock to the golden-domed shrine in Karbala, Iraq, to mark Ashoura.