Kyrgyzstan slid deeper into a political crisis, with several people barred from leaving the country while Russia described the current situation, with the country lacking clear leadership, as “chaotic”.

Border guards were given a list of people barred from leaving the country, ostensibly to ensure security amid unrest that has toppled the government. Russia’s Tass news agency described the people in that list as “high-ranking” officials.

The closures on Thursday came as Russia, which has an airbase in Kyrgyzstan, said Moscow had obligations under an existing security treaty to prevent the situation from totally breaking down. Alexander Bortnikov, the head of Russia’s FSB security service, spoke to Kyrgyzstan’s new acting security chief on Wednesday.

“The situation looks like a mess and chaos,” Kremlin spokesman Dmitry Peskov told a briefing.

The former Soviet republic, landlocked and bordered by Kazakhstan, China, Tajikistan and Uzbekistan, has seen thousands protest against the results of the October 4 parliamentary election.

The results of that election, which handed victory to establishment parties, have now been annulled, something the opposition had been calling for.

But the demonstrations peaked when, soon after the vote, opposition protesters seized government buildings and freed jailed ex-President Almazbek Atambayev.

The rallies have forced the Kyrgyz cabinet to resign, leaving the country with no clear leadership.

Three opposition groups have each proposed candidates for an interim prime minister who would need to oversee a repeat vote in the coming months, local media said.

In addition to Sadyr Zhaparov, an opposition politician who was released from jail and appointed acting prime minister, businessman Tilek Toktogaziyev has also made his ambitions clear.

Omurbek Babanov, a former prime minister, has also emerged as a contender.

Meanwhile, the outgoing parliament has itself split into two groups that were meeting separately outside the headquarters ransacked by protesters.

The group that met overnight in a hotel only included 40 MPs, whereas important decisions such as naming a cabinet require a 61-vote majority.

MP Elvira Surabaldieva posted a video from the meeting online, saying it had failed to pass a motion to impeach President Sooronbay Jeenbekov, who has clung to power despite the resignation of Prime Minister Kubatbek Boronov’s administration.

The embattled president has not appeared in public in recent days, although his office said he remained in the capital, Bishkek. He has appealed for calm and issued several statements calling for talks between rival political factions.

One person has been killed and more than 1,000 have sought medical help since the unrest broke out, as Bishkek residents scuffle with protesters and looters.

Kyrgyzstan’s central bank allowed financial institutions to reopen on Thursday since their closure on Tuesday, as business associations warned the nation of 6.5 million could face food shortages if banks and tax offices remained shut and public safety could not be guaranteed.

Kursan Asanov, the acting interior minister who took over this week after running in the election as an opposition candidate, said police, boosted by vigilante groups, had managed to prevent mass looting in the capital.

He promised to stop any attempts to further destabilise the country where violence killed hundreds after the removal of President Kurmanbek Bakiyev in 2010 in another revolt.

Kursanov also urged parliament to convene and install a legitimate cabinet, describing the current situation as stable but tense. 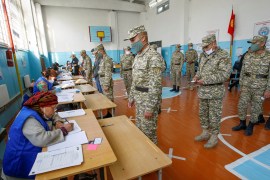 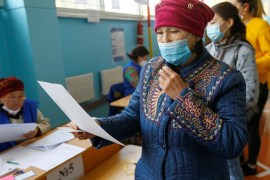 Pro-government parties expected to win significant number of seats in polls marred by allegations of vote-buying. 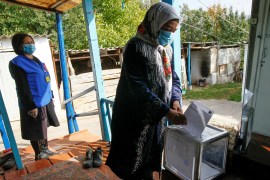