A joint statement released on Saturday by the CHADEMA and ACT Wazalendo parties came hours after populist President John Magufuli was declared the winner for a second five-year term.

The governing party also secured nearly every seat in parliament, giving it the power to change the country’s constitution.

“What happened on October 28 was not an election but a butchering of democracy,” CHADEMA chairman Freeman Mbowe told reporters, asserting that more than 20 people were killed during the election.

“We demand the election repeated with immediate effect and the dissolving of the national electoral commission.”

The opposition has urged people to come onto the streets for peaceful protests on Monday.

It has alleged widespread irregularities before and during the vote in the East African nation, including rejection of thousands of election observers, a considerable slowdown in the internet speed and affecting text messaging services and ballot-box stuffing.

Lissu earlier rejected the vote and called on the international community not to recognise it.

The national electoral commission, in its announcement late on Friday, called all votes legitimate.

The turnout was roughly 50 percent. Few international observers were allowed to observe the vote.

The US assistant secretary of state for African Affairs, Tibor Nagy, said on Friday “we remain deeply concerned about reports of systematic interference in the democratic process”.

“We continue to review credible allegations of the use of force against unarmed civilians,” he said in a tweet.

The US embassy in Tanzania said on Thursday there had been “credible allegations of significant election-related fraud and intimidation” in the vote for a president and politicians. 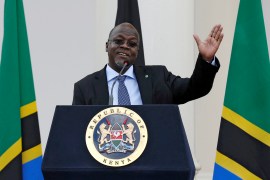 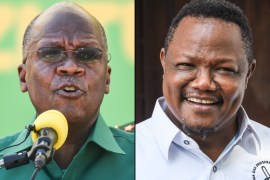 Voters will head to the polls on Wednesday to elect their president, lawmakers and local governments. 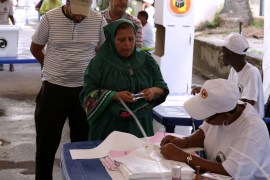 The process was like ‘spitting in the face of democracy’, says opposition candidate, appearing to warn of unrest.