The year 2020 marks half a century since Joe Biden first entered politics – and in his campaign to defeat President Donald Trump on November 3, the former United States vice president touts that experience as key to guiding the country out of its current crises.

Since his career began as a New Castle County councilman in his home state of Delaware, both the US and Biden have undergone significant political shifts.

Al Jazeera examines how some of Biden’s key policy positions have evolved over his five-decade-long tenure.

From anti-bankruptcy legislation to agricultural reforms, Biden has been involved in a wide range of US economic policies.

A former chairman of the Senate Foreign Relations Committee, Biden has been known to be “pro-free trade”, voting in favour of North American, Australian and Moroccan free trade agreements with the US.

But perhaps Biden’s greatest economic role involved the $800bn American Recovery and Reinvestment Act of 2009, when, as US vice president, he was tasked with limiting the wasteful spending of taxpayer dollars.

As the US economy now works its way back to pre-pandemic levels, Biden’s “Build Back Better” economic plan aims to raise the minimum wage to $15 an hour, offer 12 weeks of family and medical leave, and invest $400bn in clean energy.

The economic plan is woven into Biden’s $2-trillion effort to tackle the climate crisis, which includes a promise to create new “green” jobs.

As the first senator credited with introducing climate change legislation in 1986, Biden argues that the US can both pass environmental protections and stimulate the economy.

Biden’s drafting of the Violent Crime Control and Law Enforcement Act of 1994 has evolved from an asset to a liability over the course of his career.

In an effort to address rising crime rates, the bill provided $9.7bn in funding for prisons and $6.1bn for prevention programmes.

Biden worked closely with the National Association of Police Organizations to craft the legislation, saying later that “you guys sat at that conference table of mine for a six-month period, and you wrote the bill”.

Once the bill was passed, the violent crime rate decreased by 33 percent, but many experts also point to an increase in biased targeting of people of colour, who are incarcerated at disproportionate rates in the US.

Biden defended the legislation in a 1993 Senate floor speech, refuting the idea that he was one of the “wacko liberals [who] only want to look at the causes” of criminal behaviour.

Biden’s involvement in the legislation has drawn widespread criticism in recent years, especially as a US-wide movement has grown demanding racial justice and an end to police violence and the mass incarceration of Black people.

The Democratic presidential candidate has reflected on the law, but not recanted it.

Biden has said he remains proud to have co-sponsored the Violence Against Women Act, which was a part of the greater bill and allocated $1.6bn to the investigation and prosecution of violent crimes against women. That act also allowed victims to sue their aggressors in civil court.

Meanwhile, despite growing demands to defund the police amid a string of police killings of Black people, Biden has expressed his opposition to the idea, instead supporting police reform.

“I’ve long been a firm believer in the power of community policing – getting cops out of their cruisers and building relationships with the people and the communities they are there to serve and protect,” Biden said in a videotaped message played at the June funeral of George Floyd, a Black man who died in Minnesota in May after a police officer pressed his knee into his neck. 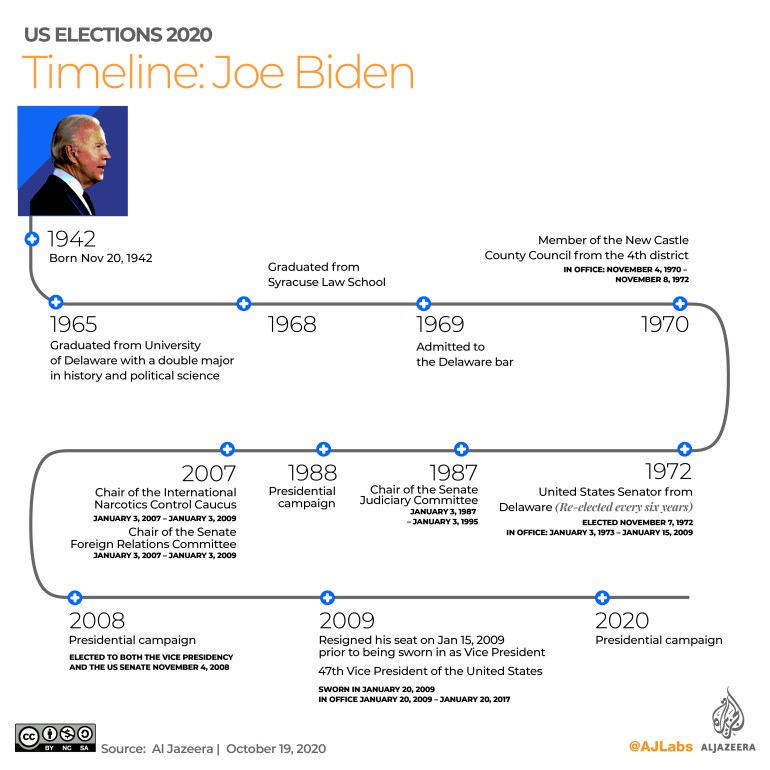 Biden was drafted for the Vietnam War during law school, but he failed a physical to qualify due to his asthma. He was critical of the war, calling it “lousy policy”.

In 1991, Biden voted against authorising the first Gulf War, but in 2002, he voted in favour of the US invasion of Iraq.

“I do not believe this is a rush to war,” Biden said in the Senate that year, later standing behind then-President George W Bush as he signed the Iraq war authorisation. “I believe it’s a march to peace and security.”

This year, Biden said in an interview with MSNBC that it had been a “mistake” to trust the “word of a president who said he wasn’t going to go to war and this [use of force] is a way to avoid going to war”.

During his presidency, Trump has reduced the number of US troops in Syria, Iraq and Afghanistan and has promised to stop “endless wars”.

Biden said he backs Trump’s decision to reduce the US military presence in Iraq and Afghanistan, but has no intention of removing US troops entirely. He has said he intends to leave about 1,500-2,000 US soldiers in Afghanistan: “These forever wars have to end … but here’s the problem, we still have to worry about terrorism,” he told US military newspaper Stars and Stripes.

Biden, who served as vice president under former President Barack Obama for eight years, has also had to address the Obama administration’s removal of more than three million undocumented immigrants from the US between 2009 and 2016.

During a Democratic primary debate last year, he was pressed on that record, saying he proposed and passed $750m for Guatemala, El Salvador and Honduras “to be able to change the circumstances of why people fled in the first place”.

Biden has proposed two immigration plans that he says would end the separation of immigrant children and parents at the US border, reinstate the Deferred Action for Childhood Arrivals (DACA) programme and reform the asylum system for those escaping life-threatening situations.

Biden also says he plans to reform the federal Immigration and Customs Enforcement (ICE) agency, as opposed to abolishing it, as some Democrats are demanding.

“When it comes to issues like abortion … I’m about as liberal as your grandmother,” Biden said in a 1974 interview.

He added then that he believed Roe v Wade, the 1973 US Supreme Court case that enshrined a woman’s right to an abortion, “went too far”. Then, in 1981, Biden voted for an amendment that would allow states to overturn the top court’s decision.

As recently as 2019, Biden continued his support for the Hyde Amendment, which restricts the use of Medicaid dollars for abortions. However, under pressure during the Democratic presidential primary, Biden changed his mind, saying he could no longer support the amendment.

In 1996, Biden voted in favour of the Defense of Marriage Act, which defined marriage as the union of one man and one woman and allowed states to refuse to recognise same-sex marriages and limited equal access to federal spousal benefits.

During his presidential campaign, Biden has said he supports legislation protecting members of the LBGTQ+ community, specifically transgender people, against hate crimes and discrimination.

Biden, who has been endorsed by the Human Rights Campaign, one of the country’s largest LGBTQ+ advocacy groups, in 2017 criticised Trump’s ban on transgender people in the military, tweeting that “every patriotic American who is qualified to serve in our military should be able to serve. Full stop”.

In the final days of the campaign he told the Philadelphia Gay News: “I will make enactment of the Equality Act a top legislative priority during my first 100 days – a priority that Donald Trump opposes.”