French Muslims reacted with horror at Thursday’s killing of three citizens in the seaside town of Nice, saying the crime is representative of neither their faith nor values.

The attack, which took place inside a church, is the third of its kind in a little over a month and comes amid heightened tensions between Muslim countries and France.

Macron’s comments came after the brutal killing of Samuel Paty, a middle school teacher who showed his pupils drawings of the prophet during a discussion on free speech.

Yasser Louati, a French civil rights activist, said perpetrators of such crimes make no distinction between Muslims and Christians and subscribed to an ideology alien to Islam.

“A woman was beheaded inside a church, this means these people have nothing to do with the sacred. There are no moral boundaries for them,” Louati told Al Jazeera.

“About 750 people were killed in mosques across the world, why can’t we connect the dots and see that this ideology has been spreading that we lost so far the battle of ideas.

“We deal with these attacks as if they were separate from one another when they are not.”

Idriss Sihamedi, an activist whose prominent Barakacity charity was dissolved by authorities on Wednesday over allegations it incited hatred, denounced the knife attack.

“These attacks are serious, and the fact this is happening in places where people come to seek peace makes it doubly serious,” he said in a tweet.

“Support for the families of the victims, but also for the faithful. France is sinking into madness, hatred, anger, and revenge.”

Meanwhile, Faiza Ben Mohammed, a journalist, thought it useful to remind her huge social media following of the prophet’s championing of values such as peace and coexistence.

“The Prophet Muhammad said: ‘Whoever harms a Jew or Christian will find in me his adversary on the Day of Judgement.”

Fatima Ouassak of the parents’ syndicate Front de Mères expressed sympathy for the victims’ families, saying it was important for people to stand in solidarity in these trying times.

“[We are] against the hate-makers responsible for the infernal cycle and the climate of terror of which we are victims, let’s stick together! Solidarity, equality, justice and respect for human dignity.”

This was also the case with Sebastien Abdelhamid, a television host, who expressed “anger and disgust” over what happened in Nice.

“All my thoughts to the victims and their families. What barbarism … these people are not human… It is not possible #nice.”

Others expressed outrage at how some members of the political establishment were attempting to exploit the event for political ends.

Reacting to the news in a tweet, far-right leader Marine Le Pen said “the dramatic acceleration of Islamic acts of war against our fellow citizens … requires … a global response aimed at eradicating Islamism” from French soil.

“You do realise she is using the attack in her political interest … before even showing her support for the victims,” said one Twitter user. 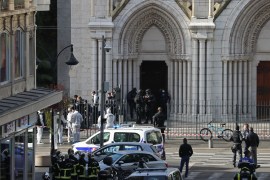 Assault carried out at a church in Nice comes weeks after teacher Samuel Paty was killed near Paris. 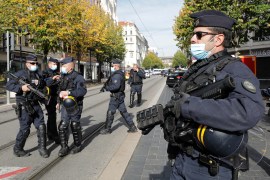 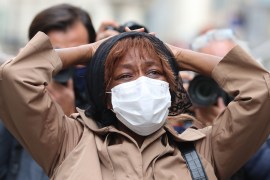 World offers solidarity and support to France after an attacker killed three people.