Three people were stabbed to death at a church in the Mediterranean city of Nice on Thursday, prompting the country to raise its security alert status to the highest level.

This is what we know so far:

Named as Brahim Aouissaoui by French and Tunisian law enforcement sources, the attacker armed with a 30cm (12 inches) knife began stabbing people praying inside the Basilica of Notre-Dame in Nice.

They included 55-year-old Vincent Loques, a father of two who was the church’s sacristan, in charge of its holy objects, according to local broadcaster France-Bleu. Another was a 44-year-old mother of three from Brazil, according to Brazil’s Foreign Ministry.

France-Bleu said her name was Simone and she had studied cooking in Nice and helped poor communities in the area.

A 60-year-old woman, who like Loques died on the spot, has not been named. The woman from Brazil had managed to make it out of the church into a nearby cafe, but later died of her wounds, Nice Mayor Christian Estrosi told reporters at the scene.

Prosecutors are treating the assault as an act of “terrorism”.

When did the attack happen?

The attack took place on Thursday at about 8.29am local time (07:29 GMT), and came just days after thousands rallied across France in solidarity with teacher Samuel Paty, who was beheaded for having shown pupils cartoons of the Prophet Muhammad.

It was not immediately clear if Thursday’s attack was connected to the cartoons, which Muslims consider blasphemous. 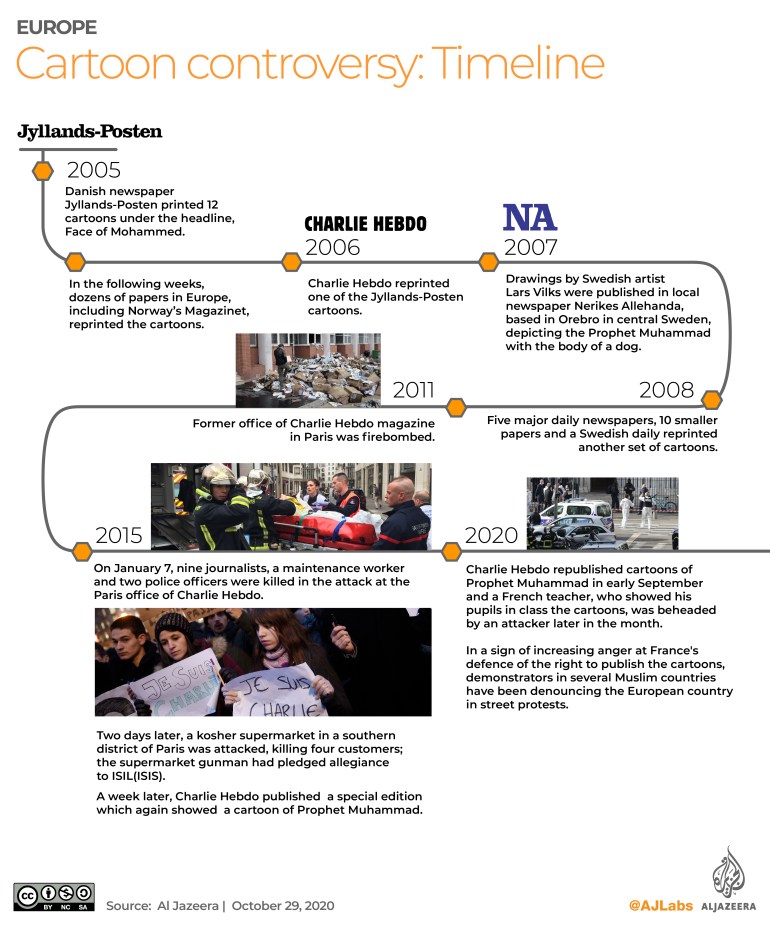 Loques, the church worker, was a father to two girls, according to Canon Philippe Asso, the church’s most senior cleric. He had opened the doors of the church and was preparing the building for the first mass of the day.

“He did his job as a sexton very well,” said Gil Florini, a Catholic priest in Nice. “He was a very kind person.”

“Tell my children I love them,” the mother from Brazil said, before her death, according to French cable channel BFM TV.

Who is behind the attack?

According to reports by French news agency AFP, Aouissaoui, the main suspect, is 21-year-old Tunisian who arrived in Europe via Italy a few weeks ago.

He landed in late September on the Italian island of Lampedusa, where he was placed in virus quarantine by authorities before being released with an order to leave Italian territory.

He arrived in France in early October, sources said.

France’s chief anti-terrorism prosecutor Jean-Francois Ricard says the attacker arrived in Nice by train at 6.47am (05:47 GMT) and spent nearly half an hour at the station before he headed to the church just 400 metres (1,300 feet) away.

“The suspected knife attacker was shot by police while being detained. He is on his way to the hospital, he is alive,” Mayor Estrosi told reporters.

Police say that they found two other knives, two telephones and a copy of the Quran when they searched the scene after the attack.

Investigators on Friday detained a second suspect in Nice – a 47-year-old man believed to have been in contact with Aouissaoui the night before.

“Quite clearly, it is France that is being attacked,” he said. “If we are attacked, it is because of our values.”

Prime Minister Jean Castex raised France’s security alert to its highest level and said the government’s response would be firm.

In Paris, legislators in the National Assembly observed a minute’s silence in solidarity with the victims. The mayor of Paris, Anne Hidalgo, said the people of Nice “can count on the support of the city of Paris and of Parisians”.

A representative of the French Council for the Muslim Faith strongly condemned the attack.

World leaders expressed solidarity with France after the attack.