A rift between France and Muslim nations is growing after French President Emmanuel Macron said earlier this month that Islam was in “crisis”.

Tension escalated after French teacher Samuel Paty was killed on October 16 near his school in broad daylight. He had shown caricatures of the Prophet Muhammad to his students. Since the crime, French officials were perceived as linking the killing to Islam.

Across the Muslim world, some leaders have condemned France and Macron, including Saudi Arabia and Iran; while tens of thousands have attended protests in Bangladesh calling for a boycott of French goods.

“As a matter of principle, we strongly condemn any inflammatory rhetoric and provocative acts that seek to defame the religion of Islam,” Foreign Minister Hishammuddin Hussein said in a statement.

Hishammuddin said Malaysia, whose multi-ethnic population is just over 60 percent Muslim, would work with the international community “to promote mutual respect among religions”.

President Erdogan will grace the cover of the next edition of French satire magazine Charlie Hebdo, the publication said in a tweet, likely escalating a war of words between Erdogan and Western powers over freedom of speech.

The tweet showed a cover featuring a caricature of Erdogan sitting in a chair and lifting the dress of a woman to reveal her backside with the caption “Erdogan – he’s a lot of fun in private.”

The next Charlie Hebdo is set for release on Wednesday.

Erdogan has been at the forefront of a wave of anger from Muslim majority countries after Charlie Hebdo opted to rerelease caricatures of the Islamic prophet Mohammed that had enraged Muslims a decade.

France urges EU to adopt measures against Turkey at next summit

“France is united and Europe is united. At the next European Council, Europe will have to take decisions that will allow it to strengthen the power balance with Turkey to better defend its interests and European values,” Trade Minister Franck Riester told lawmakers, without elaborating.

Turkey’s parliament has condemned French Macron’s defence of caricatures depicting Prophet Muhammed, saying his comments were “sick sick rhetoric” with the potential to cause a global rupture.

“With his reckless actions under the pretence of ‘supporting freedom of expression’, (Macron) is triggering a conflict, rupture whose global repercussions can deeply and negatively impact people of all beliefs,” the four parties said in their joint statement.

The United States has voiced hope that NATO allies France and Turkey would ease tensions that have soared over President Emmanuel Macron’s defence of caricatures depicting Prophet Muhammad.

Kadyrov to Macron: ‘You are forcing people into terrorism’

Chechen leader Ramzan Kadyron has said that President Emmanuel Macron was contributing to the radicalisation of people by insisting that caricatures of Prophet Muhammad fell under free speech.

“You are forcing people into terrorism, pushing people towards it, not leaving them any choice, creating the conditions for the growth of extremism in young people’s heads,” Kadyron wrote on Instagram.

“You can boldly call yourself the leader and inspiration of terrorism in your country,” Kadyrov wrote, addressing Macron.”

As tensions between French President Emmanuel Macron and Turkish President Recep Tayyip Erdogan mount amid a debate over Islam and freedom of expression, some in France have offered an eye-roll response, while the French president’s domestic opponents have seized on an opportunity to criticise his failure to address the deepening crisis.

The fallout between the Muslim world and France continued on Tuesday, with anger rising over Macron’s recent speech in which he said Islam was “in crisis” globally, and amid renewed support in the country for the right to display caricatures of the Prophet Muhammad.

“This isn’t the time for this,” Silouane Tessak, a student living in northeast Paris, told Al Jazeera. “There’s so much going on in the world, especially with the [coronavirus] health crisis. Is this really the appropriate moment for a political spat?”

Others worried the drama was creating an unnecessary distraction as France deals with record numbers of new coronavirus cases.

Boycott of French goods: ‘This is the strongest weapon we have’

In Qatar, shoppers said they supported the decision by some retailers to withdraw French products from their shelves.

“I commend this decision by al Meera and I hope other companies will follow its example,” said Jassim Ibrahim Shahbeek, referring to one of the country’s biggest supermarket chains. “This is the strongest weapon we have right now.” 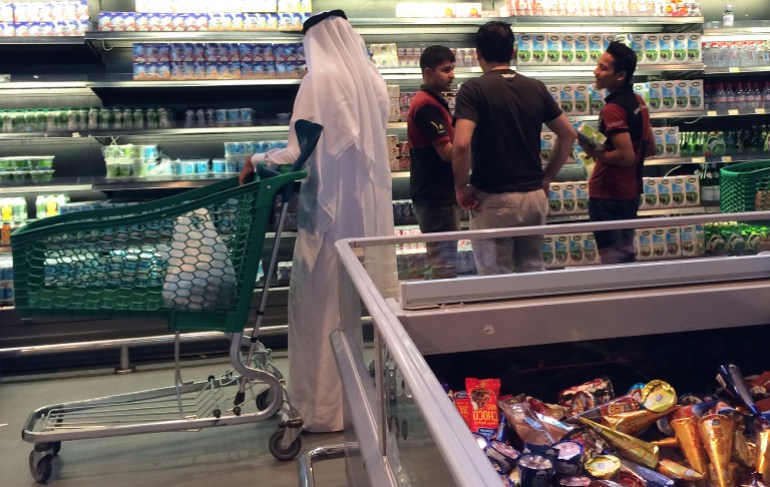 Doha residents expressed hope that the boycott initiative of French products would get their voices heard [File: AFP]

As Muslims across the world protest and broaden their calls for a boycott of French products, hashtags with a different message are trending in Hindu-majority India.

#IStandWithFrance and #WeStandWithFrance were among the top trends on Indian Twitter on Monday and Tuesday, with thousands expressing their solidarity with France.

President Recep Tayyip Erdogan’s support for a boycott of French goods is a further setback to Turkey’s already stalled bid to join the European Union, the European Commission said.

“Calls for boycott of products of any member state are contrary to the spirit of these obligations and will take Turkey even further away from the European Union,” a spokesman said.

“Fascism is not in our book, it’s in your book. Social justice is in our book,” Erdogan said on Sunday at a meeting of his Justice and Development Party (AK Party) in the eastern Malatya province, calling Wilders a “fascist”.

His remarks came after Party for Freedom leader Wilders, known for his anti-Islam stance, shared on Twitter an insulting cartoon of the Turkish president which was denounced by several Turkish officials, including Foreign Minister Mevlut Cavusoglu.

Hundreds of Palestinians staged a protest in the town of Al-Ram in Jerusalem against French President Emmanuel Macron. They believe the French president’s critique of Islam and the country’s support for the caricatures of Prophet Muhammad were insulting.

France tells its citizens in Muslim countries: Watch out for backlash

France has warned its citizens living or travelling in several Muslim-majority countries to take extra security precautions because of a surge of anger over caricatures of the Prophet Muhammad displayed in a French school.

French officials have said they will continue to support the right to show the caricatures after an 18-year-old student of Chechen origin killed Samuel Paty, a teacher who showed the images to his pupils as part of a civics lesson.

As Muslims’ Human Rights Defenders, we no longer feel safe in France. After the government called for our dissolution and designated us « an enemy of the Republic », the CCIF goes international.https://t.co/P1160TrfT1

Tens of thousands of protesters marched through Dhaka, the Bangladesh capital, calling for a boycott of French products and burning an effigy of Macron after he defended caricatures depicting the Prophet Muhammad.

Police estimated that more than 40,000 people took part in the march, which was halted before it could get close to the French embassy.

Hundreds of officers used a barbed-wire barricade to stop the protesters, who dispersed peacefully.

A ministry official told the diplomat Iran strongly rejected “any insult and disrespect to the Prophet of Islam … and Islam’s pure values of Islam by any person regardless of their position”, according to local media.

Saudi Arabia has condemned caricatures of the Prophet Muhammad and any attempts to “link Islam with terrorism”.

However, the kingdom did not echo calls by other Muslim-majority countries for action against images being displayed in France of the prophet.

A foreign ministry statement also said Saudi Arabia “condemns every terrorist act, whoever committed it”, in an apparent reference to the beheading of teacher Samuel Paty near Paris this month.

Hello. I’m Usaid Siddiqui in Toronto, bringing you the latest updates on the backlash over French President Emmanuel Macron’s critique of Islam. Here’s a quick recap:

The fallout between France and the Muslim world continues on Tuesday.

A rift has widened after two events – the first was Emmanuel Macron’s speech on October 2 in which the French president said Islam was a religion in “crisis” across the world, as he sought support for a new bill to strengthen secularism laws.

The second event, the killing of teacher Samuel Paty, has led to further upset. While Muslims condemned the gruesome daylight beheading, the response from French officials had been perceived as linking Islam with “terrorism”. There are also fears of collective punishment.

Further, because Paty was killed after showing students caricatures of the Prophet Muhammad, officials including Macron have been defiant in saying these images would continue to be allowed as a matter of freedom of expression.

The prophet is deeply revered by Muslims and any kind of visual depiction is forbidden in Islam.

Over the weekend, Muslims called for a boycott of French goods, a move supported by Turkish President Recep Tayyip Erdogan, who often clashes with Macron. There have also been several street protests across the Muslim world.

Some world leaders have criticised Macron’s treatment of Islam, while many in Europe stand by him.