The World Health Organization (WHO) is urging people around the world not to give up in the fight against the coronavirus as cases surge once again, stressing the need for mask-wearing, physical distancing and other measures to avoid the kind of full-scale lockdowns that were imposed earlier this year.

WHO chief Tedros Adhanom Ghebreyesus told a virtual briefing that he understood the “pandemic fatigue” that some people were feeling but stressed the need to continue measures to contain a virus for which there remains no cure or vaccine.

“Working from home, children being schooled remotely, not being able to celebrate milestones with friends and family or not being there to mourn loved ones – it’s tough and the fatigue is real. But we cannot give up. We must not give up.”

Around the world, but particularly in Europe and the United States, new cases are surging beyond levels seen in the first wave of the pandemic back in March.

Data from Johns Hopkins University shows more than 43 million cases globally and nearly 1.2 million deaths from the disease, which first emerged in the Chinese city of Wuhan late last year.

In the US, where there has been resistance to mask-wearing and other measures to curb the spread of the infection, average deaths a day have risen by 10 percent in the last two weeks – to nearly 794 on Sunday, compared with 721 previously. It remains the world’s worst-affected country in terms of cases and deaths.

“We cannot have the economic recovery we want and live our lives the way we did before the pandemic,” WHO chief said. “We can keep our kids in school, we can keep businesses open, we can preserve lives and livelihoods. But we must all make trade-offs, compromises and sacrifices.”

WHO emergencies chief Michael Ryan also said countries should “not give up on trying to suppress transmission.”

He voiced particular concern about the situation in Europe, which in the past week accounted for 46 percent of global cases and nearly a third of global deaths.

“There’s no question that the European region is an epicentre for disease right now,” Ryan said.

Maria Van Kerkhove, the WHO’s technical lead on the pandemic, also voiced concern about the situation in Europe – and in particular a surge in admissions to hospital and rapidly filling intensive care units.

“In many cities we’re seeing beds filling up too quickly and we’re seeing many projections saying the ICU beds will reach capacity in the coming days and weeks,” she told Monday’s briefing.

Tedros stressed that governments also needed to do their part to break transmission – test extensively, isolate confirmed patients, trace their contacts and provide “supported quarantine” for all contacts.

He noted that such measures had previously been shown to suppress the outbreak.

On Sunday, US President Donald Trump’s chief of staff Mark Meadows told the CNN TV network that the administration’s focus had moved to mitigation, not stamping out the virus.

Asked about Meadows’ comments, Tedros said he agreed that focusing on mitigation and especially on protecting the vulnerable, was important.

“But giving up on control is dangerous,” he said.

Earlier, he noted that politics had also hindered the pandemic response in countries around the world.

“This is why I have said repeatedly: stop the politicisation of COVID-19.” 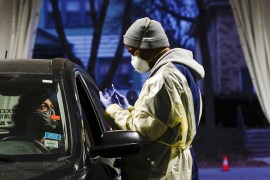 Americans are urged to wear masks to curb the spread of the disease as more states set new records for daily cases. 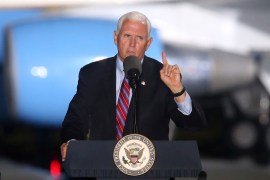 Mike Pence’s chief of staff tests positive for COVID-19, but the US vice president will remain on the campaign trail. 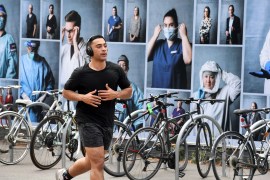 For first time in four months, Victoria reports no new cases, raising hopes lockdown in city of Melbourne may be eased. 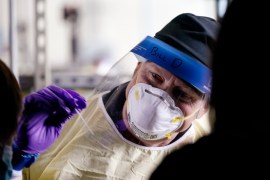 The US has recently seen a record-breaking surge in daily and weekly averages of new coronavirus cases.