President Recep Tayyip Erdogan has warned Turkish citizens against buying French goods, amid growing calls across the Muslim world for a boycott.

His remarks on Monday widened a rift between Turkey and France.

“I call on my people here. Never give credit to French-labelled goods, don’t buy them,” Erdogan said in a televised speech in Ankara, TRT reported.

Muslims are threatening a boycott over French President Emmanuel Macron’s speech earlier this month, in which he claimed Islam was a religion in crisis across the world. Many are also angry about the level of support in France for caricatures depicting the Prophet Muhammad.

While those in France say the caricatures should be allowed as a matter of free speech, Muslims find the images deeply offensive as they link Islam to “terrorism”, and as any depiction of the prophet is forbidden in Islam.

Decrying rising Islamophobia in Europe, Erdogan said hostility towards Islam and Muslims has become state policy in some European countries.

Addressing world leaders, he said: “If there is persecution in France, let’s protect Muslims together.

The fallout between Macron and the Muslim world escalated on Monday, with prominent figures and groups in Asia and the Middle East condemning the French leader.

In many Muslim-majority countries, street rallies accompanied campaigns on social media protesting against Macron and France.

Erdogan said on Saturday Macron had a problem with Muslims and needed mental checks, insisting a day after that he had “lost his mind” – a rebuke that caused France to recall its ambassador from Ankara.

Macron and Erdogan have sparred over several issues in recent months, including tensions in the eastern Mediterranean, the war in Libya and the conflict in Nagorno-Karabakh.

France’s fragile relationship with its Muslim minority, the largest in Europe, is being tested in the aftermath of the killing of Samuel Paty. The French teacher had shown caricatures of the prophet – previously published by a satirical magazine – in a class on freedom of expression. He was beheaded in broad daylight near his school.

The crime has renewed the debate over the caricatures and comes amid the trial over the deadly 2015 Charlie Hebdo shooting.

On Wednesday, Macron said France would continue “the fight for freedom” at a national tribute in Paris. The caricatures were projected on government buildings a few days later.

Earlier this month, when Macron described Islam as a religion “in crisis” worldwide, he promised to present a bill in December to strengthen a law that officially separates church and state in France.

From the Gaza Strip and Bangladesh to Morocco and the Syrian city of Idlib, people took to the streets on Sunday to protest against the French president.

Since Friday, the English hashtags #BoycottFrenchProducts and #Islam and #NeverTheProphet in Arabic have trended, while several Arab trade associations have announced boycotts of French products.

Iran’s Foreign Minister Javad Zarif wrote on Twitter that Muslims are “the primary victims of the ‘cult of hatred’”.

Pakistan’s Prime Minister Imran Khan said Macron “could have put healing touch and denied space to extremists rather than creating further polarisation and marginalisation that inevitably leads to radicalisation”. 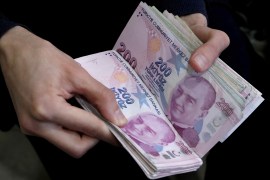 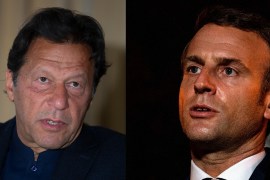 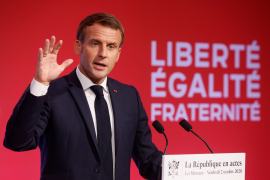 ‘Islam is a religion that is in crisis all over the world today’, says Macron, as he unveils plan to defend secularism. 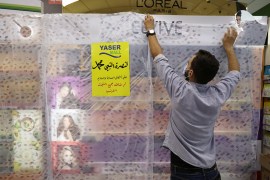