Abuja, Nigeria – A judicial panel investigating police brutality in Nigeria and the recent shooting of unarmed protesters in the country’s financial hub of Lagos has convened for the first time, as demands for accountability grow.

The establishment of an independent body to oversee the investigation and persecution of all reported cases of police misconduct has been one of the main demands of peaceful demonstrators who this month took to the streets across Nigeria to protest against police violence and call for sweeping reforms.

On October 20, nearly two weeks into the protests, witnesses and rights groups said soldiers opened fire on demonstrators gathered at a toll gate in Lekki, an upmarket area of Lagos. The military denied its involvement in the attack but Amnesty International said 12 people were killed in Lekki and Alausa, another area of Lagos, by soldiers and police.

“How the government handles the Lekki shooting incident would go a long way in assuaging the concerns of many Nigerians,” said Lagos resident Ignatius Preye, who took part in the protests against police brutality.

“People should be held to account and compensation rightly paid to victims,” the 31-year-old told Al Jazeera. “There is no justification for the level of violence on protesters who had no arms and remained peaceful all through the demonstration.”

The Judicial Panel of Inquiry set up by the Lagos State Govt has my full support,as it commences sitting this week. I‘m confident that all the State Panels will help ensure justice is done on behalf of the peaceful protesters and law enforcement agents who sadly lost their lives.

The panel in Lagos, which has a six-month mandate, has so far received 15 complaints which are all unrelated to the shooting in Lekki, according to reports.

At least five other states have also set up similar panels of inquiry to investigate abuses by the police, with more states indicating interest to follow suit.

“I’m confident that all the State Panels will help ensure justice is done on behalf of the peaceful protesters and law enforcement agents who sadly lost their lives,” Nigerian President Muhammadu Buhari said in a Twitter post late on Sunday.

On Friday, said 51 civilians were killed and 37 injured since the protests began, blaming the violence on “hooliganism”. He added that 11 policemen and seven soldiers had been killed by “rioters”.

Doris Okuwobi, the chair of the Lagos panel, has promised a speedy process and urged the public to come forward with information.

Folorunsho Obafemi is a Lagos resident planning to do so.

The 24-year-old said he is preparing his petition to the panel, hoping to get justice for abuses he allegedly suffered last year at the hands of members of the Special Anti-Robbery Squad (SARS), a notorious police unit that has long been accused of extortion, torture and even extrajudicial killings.

“I was beaten up, handcuffed and thrown into the back of a police van like a criminal. I was not even allowed to defend myself when SARS officers came to arrest me,” the shop assistant said.

“I spent almost a week in detention and they refused to release me until I was able to raise some money through the support of some friends,” added Obafemi, who said he wants compensation for the beating and a public apology from the police.

Peaceful demonstrations against police brutality kicked off on October 8 after a video allegedly showing a SARS officer killing a man was widely shared online.

On October 11, authorities announced the disbanding of SARS and said its members would be redeployed to other police units. The announcements, however, failed to appease protesters wary of similar past pledges, leading many to call for a complete overhaul of the police force.

The unrest prompted several state governors to impose around-the-clock curfews last week in a bid to curb the violence.

According to Amnesty, at least 56 people have been killed and hundreds injured since the protests began.

“Victims include protesters and thugs who were allegedly hired by the authorities to confront the protesters. In many cases, the security forces had used excessive force in an attempt to control or stop the protests,” the rights group said. 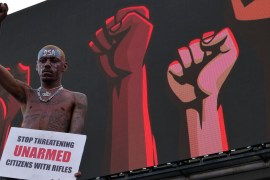 Can police brutality in Nigeria be stopped?

It was supposed to fight rampant armed robbery in Nigeria, but SARS stands accused of human rights abuses. 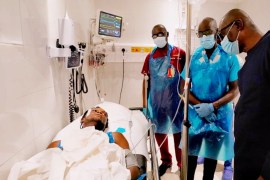 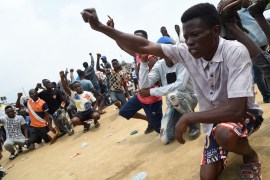