The conservative opposition Homeland Union party has won Lithuania’s elections with a projected 50 seats in the 141-seat parliament, the electoral commission said late on Sunday after almost all votes were counted.

Prime Minister Saulius Skvernelis’ Union of Farmers and Greens came a distant second with just 32 seats, while its three coalition partners fared even worse – two of the three scraped back into parliament, also known as Seimas, with only three seats each.

In a joint statement the leaders of the three parties, which would have a slim majority, said they would begin talks on forming a centre-right coalition led by Simonyte, a former finance minister.

“We are determined to focus our efforts on restoring the trust between the state and the people,” they said.

Sunday’s polls, which came two weeks after a first round of voting, took place as health authorities announced that 603 people had tested positive for the novel coronavirus in the previous 24 hours – a daily record.

It was a huge jump from Friday when the previous record of 424 daily cases was announced. The country of three million people has so far recorded 10,184 infections and 134 virus-related deaths.

Strict health and safety measures were imposed during the election with voters obliged to wear masks and bring their own pens.

The government’s handling of the pandemic shaped the election campaign, which was dominated by economic and socio-political issues.

In the first round, 70 seats were decided using the proportional representation system while the remaining 71 seats were elected by the first past the post method on October 25.

Almost 2.5 million people were registered to vote in the elections for the unicameral parliament. 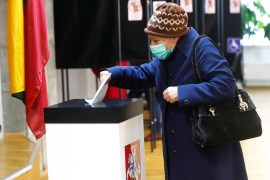 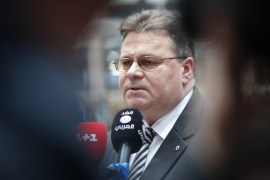 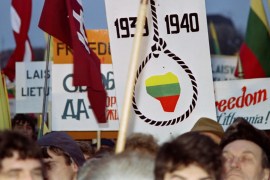 Thirty years after independence from Soviet Union, some in Lithuania fight new battle to fend off Russian influence.