One of Bangladesh’s top women cricketers has hit critics for a six after being accused of disrespecting national culture by posing for photos in full wedding attire and a bat.

Pictures of Sanjida Islam wielding a cricket bat while dressed in an orange sari and wearing dozens of bangles went viral after she posted them on social media last week.

The International Cricket Council – the sport’s governing body – retweeted the pictures to hundreds of thousands of worldwide followers with a tick against a wedding-ceremony checklist reading: “Dress, jewellery, cricket bat.”

But some in her Muslim-majority home country said she had gone too far.

“There is nothing in her that an Islamic society can follow,” said one on Facebook. Others called for “strict punishment”.

Most people, however, loved the impromptu photoshoot.

“I did not plan to pose with a bat,” said Sanjida, who went to the stadium with groom Mim Mosaddeak – who plays for Rangpur in the Bangladesh championship – the day before their formal vows.

“I saw some kids playing; I just could not resist … my team-mates captured the moment beautifully.

“I shared the photos casually on Facebook and Instagram. I had no idea they would go viral,” she told AFP news agency. 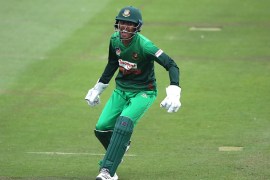 Bangladesh has lifted its first ever Under-19 tournament after beating India in Potchefstroom, South Africa. 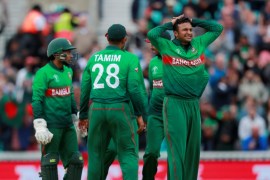 Bangladesh cricketers go on strike over pay, other demands

Players say they will not take part in any cricket activity unless their 11-point demand list is met by the board. 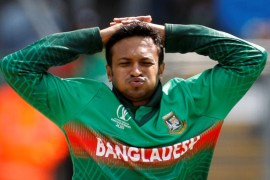 The all-rounder is banned for two years, with one year of the sentence suspended, after failing to report fixing offer.