President Donald Trump and Democratic presidential nominee Joe Biden drew sharp contrasts on policy issues and launched political attacks on each other in a televised debate, the last before the US election on November 3.

In a rhetorical contest that was more civil than their first meeting, both candidates offered closing arguments for why they should be elected as president of the United States for the next four years.

Former Vice President Biden argued people were still dying in large numbers from the coronavirus pandemic, and that they were hurting because of the economic slowdown and suffering under Trump’s leadership. He characterised it as failing and irresponsible.

President Trump argued the US was turning a corner in the progression of the coronavirus – despite evidence that infections are rising again – and said the nation was “learning to live with it”. He warned Biden would attempt to shut down the US economy again, triggering an economic depression and stock market collapse.

And Trump sought to paint Biden as a corrupt politician who failed to get things done when he was vice president in the Obama administration, leaving Trump with a mess to clean up in 2016.

“If he gets in, you will have a depression the likes of which you have never seen. Your 401(k)s will go to hell and it will be a sad day for this country,” Trump said, warning against “socialised medicine” and adding Biden “was there for 47 years, he did not do it”.

Turning to address Americans directly through the camera at one point, Biden pegged his case to economic, kitchen-table issues that pollsters say independent voters care about most.

“It’s about your family and your family’s hurting badly,” Biden said.

“If you’re a middle-class family, you’re getting hurt badly right now. You’re sitting at the kitchen table this morning [discussing] we can’t get new tyres that are bald because we have to wait another month or so,” Biden said.

“Or, are we going to be able to pay the mortgage? Who’s going to tell her, she can’t go back to, to community college? There’s the decisions you’re making in the middle-class families like I grew up in Scranton [Pennsylvania] and Claymont [Delaware]. They’re in trouble, we should be talking about your families but that’s the last thing he [Trump] wants to talk about,” Biden said.

The quality of the debate benefitted from a change in rules put in place by the Commission on Presidential Debates, muting the candidate’s microphone while the other answered the moderator Kristen Welker’s questions.

Welker asked each candidate a series of questions on policy, giving each one an uninterrupted two minutes to respond and then allowing for a back-and-forth debate.

Trump, who was criticised in the first debate on September 29 for interrupting Biden repeatedly, took a more moderate and seemingly reasonable tone at the event held at the Belmont University in Nashville, Tennessee.

But he also distorted Biden’s positions on various issues and tried to paint the former vice president as a corrupt politician because of his son’s business dealings in Ukraine and China.

“The problem is that the vast majority of viewers won’t have any idea what Trump is talking about. Trump supporters get it, but those are voters the president already has. Trump’s imperative in this debate is to expand his base – yet he’s preaching to the choir.”

Trump attempted to tie the former vice president to emails found on an old laptop that allegedly belonged to the Biden’s son.

Hunter Biden served on the board of Burisma, a Ukrainian energy company while his father was vice president. While the arrangement created the appearance of a conflict of interest, no evidence has emerged to incriminate his father.

Biden responded, saying: “I have not taken a penny from any foreign source in my life,” and then brought up a New York Times newspaper report that revealed Trump had an account in a Chinese bank. Trump said the account was closed years ago.

Biden challenged Trump to release his tax returns which the president has yet to do.

With about eight minutes to go in the debate, Biden glanced at his watch to check the time, sparking a reaction on social media from some who thought it conveyed impatience or was improper.

The candidates took opposing stances on a number of policies:

Trump said he wanted to see the Affordable Care Act (ACA) repealed while Biden said he would seek to strengthen the law while adding people to the government’s Medicare programme.

Biden coined a new term “Bidencare”, saying he build on the ACA. “What I’m going to do is pass Obamacare with a public option, become Bidencare,” he said.

Biden criticised Trump for legitimising North Korea leader Kim Jong Un by holding summit meetings that did nothing further the issue of the denuclearisation of the Korean peninsula. Trump said his outreach to Kim had averted a possible war.

Trump and Biden sparred over Trump’s policy of separating children from their parents at the US southwest border where thousands of families seeking asylum have been detained. Lawyers say the government has been unable to identify the parents of some 545 children who are still being held.

Trump said it was “good” while Biden called it “criminal”.

Race and the Black community

Welker asked both candidates if they understood why Black parents had to have the so-called “talk’ with their young as they grow up. “Do you understand why these parents fear for their children?” Welker asked.

Biden responded saying that he did empathise with the challenge Blacks face regarding the behaviour of the US police. Trump did not address the question directly and instead reacted defensively by attacking Biden’s record on crime. 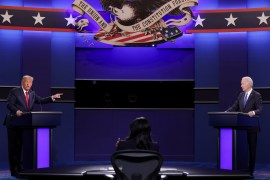 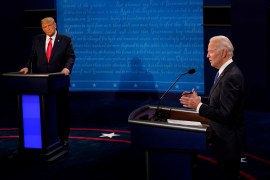 Analysis: A calmer debate offers a closer look at the candidates on a wide range of subjects as the election nears. 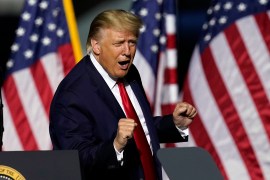 In the campaign’s final stretch, the US president finds a new classic hit to groove to, with mixed reviews. 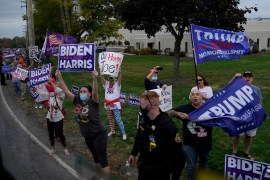