Civil society groups have urged the countries convening a UN-backed Rohingya donor conference to acknowledge that genocide was committed against the ethnic minority in Myanmar, as the United Kingdom announced new funding for the tens of thousands of Rohingya refugees now living in camps in Bangladesh.

With the donor conference due to start later on Thursday, a group of 35 organisations appealed to the US and other countries to acknowledge that what happened in Myanmar constituted genocide.

The August 2017 crackdown that prompted the exodus to Bangladesh is the subject of an ongoing genocide investigation at the United Nations’ top court in The Hague.

In a provisional ruling in January, the court told Myanmar to take emergency measures to protect the Rohingya, saying it had caused “irreparable damage” to their rights.

Myanmar does not recognise the mostly Muslim Rohingya as citizens, even though they have lived in the country for generations. Government officials refuse to even use the term Rohingya.

“A genocide determination would send a sense of urgency to spur the kind of multilateral diplomatic engagement and pressure needed to ensure that Burma (Myanmar) refrains from committing further atrocities against ethnic and religious minorities and, ultimately, creates the conditions conducive to the safe, voluntary, informed and sustainable return of Rohingya refugees to their place of origin,” human rights and refugee groups, including Fortify Rights, Refugees International and the Burma Rohingya Organisation UK, wrote in a letter to US Secretary of State Mike Pompeo on the eve of the conference.

The virtual aid conference starts later on Thursday and is co-hosted by the UK, the United Nations refugee agency (UNHCR), the United States and the European Union.

UK Foreign Secretary Dominic Raab outlined a further 47.5 million British pounds ($63 million) in aid for the Rohingya and to help Bangladesh deal with the coronavirus pandemic and its frequent natural disasters.

“Today I urge the world not to turn away from the Rohingya’s suffering and to take the action necessary to allow them to safely return to the homes they fled in terror,” Raab said in a statement.

The UNHCR has appealed for more than $1bn this year to meet the humanitarian needs of the Rohingya refugees, 860,000 of whom are living in sprawling camps across the Cox’s Bazar district in southeastern Bangladesh. In a statement announcing the conference, it said it had received less than half that amount so far.

“The people living in Cox’s Bazar face unimaginable hardship and many have been victims of violence,” Raab said.

“We have imposed sanctions on the perpetrators of this brutality and this new funding will save lives in the camp and help Bangladesh become more resilient to disasters such as coronavirus.”

While hundreds of thousands of Rohingya have fled to Bangladesh and elsewhere in Southeast Asia, an estimated 600,000 Rohingya remain inside Myanmar, including in camps set up by the government in Rakhine State following communal unrest in 2012.

Human Rights Watch has described the camps as an open prison, while Marzuki Darusman, chair of the UN fact-finding mission on Myanmar, warned in 2018 that an “ongoing genocide” in Myanmar’s treatment of the minority.

The UN refugee agency is urging the international community and countries in the region to look beyond humanitarian funding and step up efforts to work with Myanmar to find a lasting solution to the crisis.

“The responsibility for creating conditions conducive to the safe and sustainable return of Rohingya rests with Myanmar authorities,” the UNHCR said in a statement.

“This process will need to engage the whole of society, open and enhance the dialogue between the Myanmar authorities and Rohingya refugees and take measures that help build confidence and trust. These include lifting restrictions on freedom of movement, enabling displaced Rohingya to return to their own villages and providing a clear pathway to citizenship.”

Tomorrow UNHCR 🇺🇳 joins 🇺🇸, 🇬🇧 + 🇪🇺 at the #RohingyaConf2020 to spotlight how the international community can take action.

The Myanmar military has justified its actions in 2017 as a response to a spate of attacks on police posts in Rakhine by the Arakan Rohingya Salvation Army (ARSA), an armed group.

It is now battling the Arakan Army (AA), an ethnic Rakhine armed group and the escalating conflict has prompted the authorities to cancel the election – taking place in November – in most parts of the western state.

Britain has sanctioned two Myanmar generals after a UN investigation found them responsible “for atrocities which amount to ethnic cleansing”, according to the British foreign ministry’s statement. 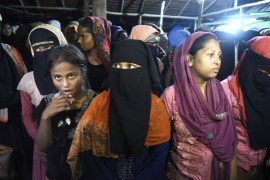 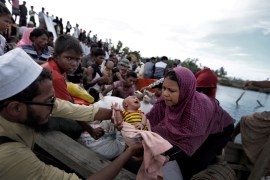 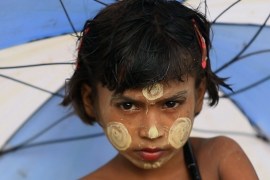 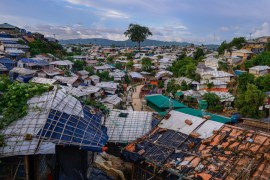 In Pictures: Rohingya refugees in Bangladesh two years on

Sunday marks two years since the mass exodus of Rohingya to Bangladesh after Myanmar’s military campaign against them.