Armenia has said it is prepared to work with international mediators to reach a ceasefire with Azerbaijan as the two rivals fight over the breakaway Nagorno-Karabakh region, where fierce clashes spilled into a sixth day.

Armenia “stands ready” to engage with France, Russia and the United States, who co-chair the OSCE group of mediators to the conflict, “to re-establish a ceasefire regime”, the Armenian foreign ministry said in a statement on Friday.

However, the statement added that “this aggression against Nagorno-Karabakh will continue to receive our strong and resolute response”.

The development came after ethnic Armenian officials in the breakaway Nargorno-Karabakh region reported another 54 military casualties among Armenian-backed troops, bringing the death toll to 158 soldiers.

Azerbaijan has not reported any military casualties but said 19 civilians have been killed in Armenian shelling.

While Armenia’s statement marks the first sign that dialogue could be possible, Turkey’s foreign minister said that for Azerbaijan to agree to a ceasefire, Armenia must withdraw its forces.

Speaking at a joint news conference with his Italian counterpart Luigi Di Maio, Mevlut Cavusoglu said on Friday that the deadlock “encourages Armenia to attack and illegally settle Armenian people to territories of another country”.

“If the international community wants to do something about Upper Karabakh, they should get Armenia to leave Azerbaijani lands at once,” Cavusoglu said, adding that Turkey will support any effort in this direction.

There are fears of the clashes expanding into an all-out, multi-front war that could suck in regional powers Turkey and Russia.

Turkey is Azerbaijan’s strongest supporter on the international scene, while Russia has a military base in Armenia.

Ankara has been accused by Armenia of supplying fighters to the conflict, drawing them out of northern Syria – charges denied by Turkey and Azerbaijan.

“Both sides expressed serious concern over the received information about the involvement in military action of militants of illegal armed groups from the Middle East,” the statement said following a phone call between the two leaders.

“A red line has been crossed,” the French leader said, adding that his country demanded an explanation.

In a joint appeal on Thursday, Putin, US President Donald Trump and Macron urged the two sides to return to negotiations aimed at resolving their long-standing territorial dispute.

Russia also suggested it was making progress in diplomatic efforts with Turkey, with Foreign Minister Sergey Lavrov and his counterpart Cavusoglu saying they were ready for “close coordination” to stabilise the situation.

Armenia and Azerbaijan have been locked in a decades-long dispute over Nagorno-Karabakh, the breakaway region which is inside Azerbaijan but controlled by ethnic Armenians backed by Yerevan.

Nagorno-Karabakh broke away from Azerbaijan during a war in the 1990s which killed 30,000, but is not recognised by any country, including Armenia, as an independent republic.

Fighting periodically breaks out in the region and talks to resolve the conflict have largely stalled since a 1994 ceasefire agreement.

Armenia and Karabakh declared martial law and military mobilisation on Sunday, while Azerbaijan imposed military rule and a curfew in large cities. 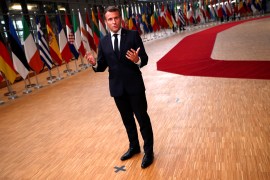 French president says he has evidence proving claim, which he describes as ‘grave development’.