With all of the ballots counted, the Ankara-backed Tatar secured 51.74 percent of the vote on Sunday, ahead of the incumbent Mustafa Akinci, at 48.26 percent, according to official media.

Tatar, who favours stronger ties with Turkey, had won 32.5 percent of the vote in last week’s first round, with Akinci closely following with 29.84 percent in a vote marked by low turnout.

Tatar appears to have benefited from a higher turnout in the runoff. He managed to rally supporters from the approximately 200,000-strong electorate who may not have voted in the first round.

In a victory speech to his supporters, Tatar, who controversially received the open backing of Turkey’s President Recep Tayyip Erdogan during the election campaign, thanked the Turkish leader and said: “We deserve our sovereignty – we are the voice of Turkish Cypriots.

“We are fighting to exist within the Turkish Republic of Northern Cyprus, therefore our neighbours in the south and the world community should respect our fight for freedom … because we deserve it.”

The TRNC is recognised as an independent state only by Turkey. Other countries consider it part of Cyprus.

The island’s internationally-recognised government has its seat in the Greek Cypriot south and is a member of the European Union.

Akinci, 72, supports the long-standing, United Nations-backed efforts to reunite the island as a “bizonal, bicommunal federation” after the successful conclusion of negotiations, while Tatar, 60, backs separate sovereign administrations.

A first test for the winner will be a meeting with Greek Cypriots and Cyprus “guarantors” – Greece, Turkey and Britain – that UN Secretary-General Antonio Guterres is expected to call soon.

The aim will be to figure out if there’s enough common ground to restart dormant peace talks. Nearly 50 years of UN-facilitated attempts at achieving reunification based on a federal framework have failed.

Ahmet Sozen, the chairman of the department of political science and international relations at the Eastern Mediterranean University, told Al Jazeera from Famagusta that the close results point to a split in the society.

Speaking alongside Erdogan earlier this month, Tatar said the TRNC was reopening public access to the fenced-off seaside ghost town of Varosha for the first time since Turkish forces invaded the north.

The move, which could hurt efforts to revive dispute-settlement talks, drew EU and UN criticism and sparked demonstrations in the Republic of Cyprus. 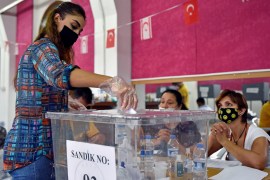 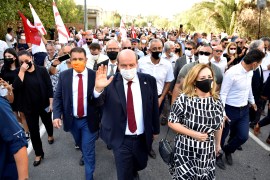 Akinci, a pro-reunification moderate, and Ankara-backed challenger Ersin Tatar are to contest an October 18 runoff.