By Arwa Ibrahim and Elizabeth Melimopoulos 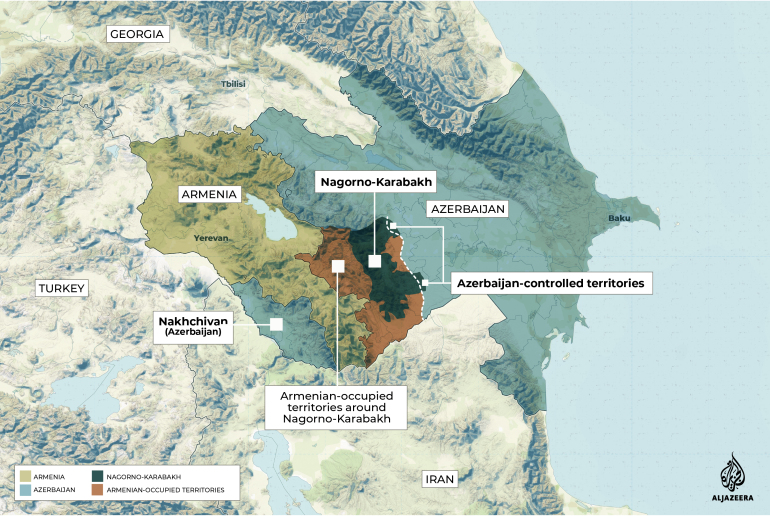 UN chief Antonio Guterres has called on Armenia and Azerbaijan to respect the truce and condemned attacks on civilians in fighting over Nagorno-Karabakh.

Guterres singled out one of the deadliest attacks on civilians so far, when a missile hit a residential area of Azerbaijan’s second city Ganja on Saturday, killing 13 people including children.

16:20 GMT – Nagorno-Karabakh says 37 more of its military killed in the conflict

The defence ministry of the ethnic Armenian-populated Nagorno-Karabakh said it had recorded another 37 deaths among its military, pushing the toll to 710, Interfax news agency reported.

A funeral ceremony was held for an Armenian soldier who was allegedly killed during fighting over Nagorno-Karabakh, hours after a truce was announced.

The funeral ceremony in the town of Shusha was attended by fellow soldiers and family members.

14:15 GMT – Erdogan accuses US, Russia and France of arming Armenia

Speaking in Sirnak in south-eastern Turkey, Erdogan reiterated his  support for Azerbaijan, saying he was “praying” the country could
succeed in the conflict by ousting the Armenians from “occupied territory.”

14:00 GMT – Nagorno-Karabakh says death toll among its military rises to 673

The defence ministry of the Nagorno-Karabakh region said it had recorded another 40 casualties among its military, pushing the military death toll to 673 since fighting with Azeri forces erupted on September 27.

The fighting has surged to its worst level since the 1990s, when some 30,000 people were killed.

” [Hundreds] of ethnic Armenians fighters have been killed … and Armenia has lost control of a territory it has held since the end of the war in 1994.”

Hello, this is Elizabeth Melimopoulos in Doha, Qatar taking over the live updates from my colleague Arwa Ibrahim.

Azerbaijan shot down another Armenian Su-25 fighter jet, according to the country’s ministry of defense, the second Su-25 to be downed in recent days.

In a statement, the ministry said the Su-25 attack aircraft was trying to launch airstrikes on Azerbaijani positions in the Jabrayil region when it was shot down.

Azerbaijan has spent days trumpeting military successes that give the air of an army on the move.

“If they don’t leave on their own, we’ll chase them out like dogs,” President Ilham Aliyev said on the eve of the now failed ceasefire after both sides accused each other of immediately breaking.

On Twitter, Aliyev listed towns his forces have recaptured for the first time since a 1994 truce ended a war that killed 30,000 and left the region in separatist hands. Most prominent among those towns are Jabrayil.

Refuting claims of heavy losses on Azerbaijan’s side, the ministry said that the Azerbaijani army was exerting “operational superiority along the entire front,” said the ministry’s statement.

Clashes erupted between the two countries September 27 and Armenia has since continued its attacks on civilians and Azerbaijani forces, even violating a humanitarian cease-fire that came into force last week.

Azerbaijan accused Armenian forces of violating the truce over the disputed Nagorno-Karabakh region just hours after it was due to have taken effect at midnight.

“Armenian forces grossly violated another agreement,” the defence ministry in Baku said in a statement, accusing them of firing artillery and mortars in various directions and of launching early morning attacks along the front line.

Reporting from Ujar in Azerbaijan, Al Jazeera’s Hoda Abdel-Hamid said: “The Azeris are pointing the finger at Armenia, saying that although Armenia has agreed to the ceasefire, it has tried to recapture lands it lost to Azerbaijan [during the fighting].”

Shushan Stepanyan, a spokeswoman for Armenia’s defence ministry, said on Twitter that Azerbaijan fired artillery shells and rockets in the early hours of Sunday.

Speaking from Yerevan, Al Jazeera’s Bernard Smith said that it was only a humanitarian truce designed for the sides to exchange bodies and prisoners of war.

“Armenia particularly needs this ceasefire to work because of the enormous domestic pressure its leadership is under,” said Smith explaining that pressure was linked due to the large number of people and land it had lost to Azerbaijan.