Jailed Philippine activist Reina Mae Nasino wanted to hold her three-month-old daughter for the last time before she was laid to rest but she could not.

Heavily armed prison officials guarding her during the funeral refused to uncuff her despite pleas from her family and human rights supporters, who have condemned the treatment of Nasino and other political prisoners and mothers in Philippine jails.

“We were denied the chance to be together. I did not even see your laughter,” said the 23-year-old Nasino, who was seen crying in front of her daughter River’s tiny white coffin on Friday.

A local court granted Nasino a three-day furlough to attend the wake and funeral of her daughter.

Nasino, a member of the urban poverty group Kadamay was arrested in November 2019 with two others for the unlawful possession of firearms – charges she said were trumped up and part of a crackdown against left-leaning activists.

In April, she petitioned the Supreme Court to release her from jail on humanitarian grounds amid the coronavirus pandemic.

As Nasino waited for the court’s response, she gave birth while in jail in July, but her baby was removed from her care and brought to her mother in August.

The following month, her baby became sick and was hospitalised, prompting calls and immediate appeal before the court for mother and child to be reunited.

Wearing a full-body personal protective equipment suit while standing in the heat of the sun, Nasino told her baby: “I hope we will be the last to experience this.”

The solemn occasion turned chaotic as police officers in camouflage uniforms dispersed the funeral procession and told the hearse carrying the coffin to speed up, forcing mourners to run after the vehicle.

“I thought we would have a proper burial with family and friends, but I was traumatised. My other daughter nearly fainted while chasing the car,” said Nasino’s mother, Marites.

I will never forget the tale of two mothers today. Nanay Maritess, Ina's mother is kneeling before the police, begging for respect and that the funeral be conducted according to their wishes; while Ina is in handcuffs and could not even wipe her own tears. pic.twitter.com/FzhCDQul1V

Since the collapse of latest talks between the government and communist rebels, the Duterte administration and its supporters have stepped up its attacks against the rebels, as well as other mainstream activists who are perceived to be supportive of socialist political ideologies.

Human rights activists have condemned the treatment of Nasino as “cruel” and “inhumane”.

“These are not random acts of cruelty and inhumanity. Clearly, this is a coordinated ‘whole-of-the-nation’ effort” of the Duterte administration, said Cristina Palabay, the secretary-general of another rights group, Karapatan.

“Baby River’s death is on the Duterte government.”

Carlos Conde of the Human Rights Watch organisation pointed out that the government’s counterinsurgency campaign “targeting open, legal activists has always been brutal” with thousands killed and tortured over the years.

“But what the government did to Nasino and her child is a new, unconscionable low.”

The police denied the allegations saying that the deployment of troops was necessary to maintain security. 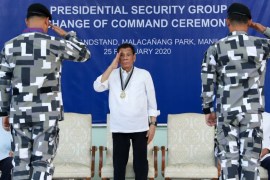 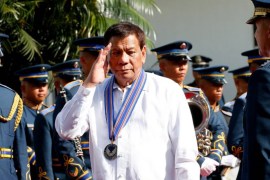 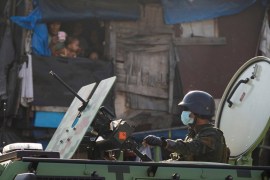