Tehran, Iran – “The second time I was dealing with the virus, one night I was in so much pain that I said my prayers before going to sleep because I felt like I might not see another morning,” says Tehran resident Sadaf Samimi.

The 29-year-old journalist told Al Jazeera she first tested positive for COVID-19 in July at her workplace and has since been working from home.

But in early September, she got sick a second time with the coronavirus after she met two of her close friends, who had been isolating at home. One of her friends had shopped for groceries at a large market, where they might have contracted the virus.

Samimi said she experienced a shortage of breath and the symptoms of a strong cold the first time she was infected, but getting through the second time was a much more painful experience, marked by severe body pains and a splitting headache, among other symptoms.

“Now I use three face masks and three [pairs of] gloves whenever I go out,” she said.

“I get so irritated and angry about people who go out unnecessarily and when I see friends posting about going on trips on social media. I feel they and their families have been fortunate enough not to be infected, so they don’t know what they’re doing to themselves.”

Samimi said she feels many people are too relaxed considering how dire the situation is.

According to health officials, more than four in five Iranians adhered to health protocols in March, weeks after the pandemic began, but that has now dropped to as low as 40 percent.

Authorities maintain that reopening schools and holding public ceremonies to observe religious occasions have had no bearing on the number of cases.

The highest number of single-day infections was recorded at 4,830 cases on Wednesday, when a worst single-day death toll of 279 was also reported.

The majority of Iran’s 32 provinces, including Tehran, are still classified as red in a colour-coded scale denoting the severity of outbreaks.

In response to the alarming rise in the number of infections, deaths and hospitalisations, officials have introduced new restrictions for Tehran, which is bearing the brunt of COVID-19 cases in the country facing the worst outbreak in the Middle East.

Last week, a mandatory city-wide mask rule was implemented and President Hassan Rouhani announced fines for people and businesses who fail to adhere to the rules.

He said people who violate the mask rule will face a fine of 500,000 rials ($1.6), while the highest fine for individuals has been defined at 2 million rials ($6.6) for those who test positive for COVID-19 and knowingly endanger others by not quarantining.

Businesses have also been ordered to refuse offering services to people without masks and could face up to 10 million rials ($33) in penalties, and ultimately, closures.

At the request of the health ministry, officials also put in effect three-day travel restrictions on five metropolises that expire at the end of Saturday.

As part of the travel restrictions, which do not apply to travel by rail or air, only people whose licence plates are registered in Tehran, Karaj, Mashhad, Isfahan and Urmia, or can prove they live in these cities, are allowed to travel to and from there.

The move came in response to an expected wave of travel during the three-day period, which coincided with national religious holidays.

On Saturday, Tehran’s governor announced the city’s partial shutdown – that saw the closure over the past two weeks of cafes, universities, cinemas and sport centres, among other places – will remain in place until at least October 23.

But authorities have been unable to impose more comprehensive lockdowns because the economy is still under immense pressure from sanctions imposed by the United States.

The sanctions have come relentlessly after US President Donald Trump unilaterally withdrew from a 2015 nuclear deal between Iran and world powers.

Samimi, who has lost several extended family members and family friends since the start of the pandemic, says after going through the COVID-19 ordeal twice, she strongly supports any restrictions that could help save lives.

“I’m no economic expert and I don’t know what the financial toll will be for people and businesses, but I think human lives are more important than the economy,” she said.

“I think a damaged economy can recover, but the life that escapes a body will never come back.”

But in an economy marked by high inflation and unemployment, many do not have the option to work from home or lose their limited incomes.

“I follow all the protocols as best I can, but a hungry stomach doesn’t care about these things,” Shahrokh, a 50-year-old father of two who works as a driver in an online ride-hailing app, told Al Jazeera.

“I stayed at home for a few weeks when the pandemic first began, but I’ve been out working since. It’s fate; if I’m supposed to die, I die,” said Shahrokh, who suffers from diabetes, a condition that makes him much more vulnerable if he contracts the virus.

Meanwhile, health workers across Iran, especially in Tehran, are under increasing pressure.

“I’m not the most experienced person, but caring for COVID patients has been one of the strangest and saddest experiences I’ve ever had,” said 24-year-old Mahsa, a final-year medical intern who spent months working in hospitals affiliated with the Azad University in Tehran during the pandemic.

“What struck me the most was the amount of anxiety, frustration and concern in patients and their families,” she told Al Jazeera.

Mahsa said it was especially frustrating for her and her colleagues not to be able to console patients; in part because so much remains unknown about the virus, and because of restriction caused by having to observe physical distancing and wear so much protective gear.

At times, she said, hospital staff could not even keep patients in the emergency room for a few minutes to give them an oxygen boost before sending them away to another hospital.

Footage aired by state-run television from hospitals in the capital in recent days have also shown that many have no empty beds, even in emergency rooms, and have no choice but to leave patients waiting or to turn them away.

Last week, the health ministry announced hospitals across the country must refuse to admit all non-emergency patients.

What is more, many hospitals are facing shortages in medicine, especially treatments that have shown promise in helping COVID-19 patients.

This has forced distraught family members to scramble for medicine, at times from black markets, often at astronomical prices that many cannot afford.

According to Mahsa, “What is evident the most at the moment among health workers is fatigue and exhaustion from the overflow of patients, and having to wear protective gear and following strict protocols at all times, even during brief rest periods, because rest areas are shared as well.”

The head of the Medical Council of Iran had the same message last week, saying “health workers are tired” in a news conference.

“We must be thinking of preventing infections.” 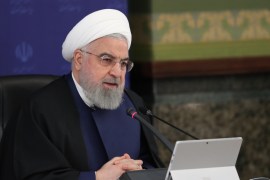 Iran struggles with a resurgence of COVID-19 as new cases and deaths increase since a two-month low in May. 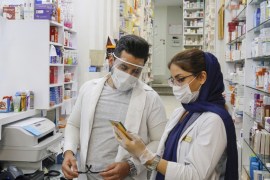 Iran has reported its highest daily number of infections in nearly a month, with cases on Sunday exceeding 2,600, according to the country’s health ministry.  The death toll in Latin America from the novel coronavirus has surpassed 200,000, a Reuters tally showed, after Peru reported another 191 deaths from the pandemic.  The Philippines has reported […] 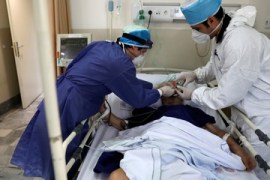 Iran has announced its highest single-day death toll since the start of the COVID-19 outbreak there in February.