US President Donald Trump should fill the Supreme Court vacant seat despite polls showing most Americans want the winner of the November elections to nominate the new judge, according to former White House Press Secretary Sean Spicer.

“If you govern by polls, that’s one thing. But I can tell you as a conservative, as a Republican, I want him to fill that seat and fill it ASAP,” Spicer told Malika Bilal, host of Al Jazeera’s show We Need to Talk.

“The reality is that there is a vacancy and it is the responsibility of the president of the United States to nominate someone for that vacancy. That is the law. That’s what supposed to happen in America.”

Trump nominated Amy Coney Barrett, a favourite of conservatives, to replace Justice Ruth Bader Ginsburg who died on September 18 at the age of 87. Barrett was grilled by the Senate Judiciary Committee this week.

A Washington Post poll released this week shows 52 percent of Americans want the 2020 election winner to fill the seat, while 44 percent want Trump to fill the seat now.

Spicer said based on the recently concluded US Senate confirmation hearings, Barrett was “one of the most impressive and qualified justices I’ve ever seen in action”.

Barrett, 48, is a constitutional scholar who Trump named to the federal appeals bench in 2017.

The debate over Barrett’s confirmation to the Supreme Court proved to be highly polarised, with left-wing groups saying they fear she will dismantle the Affordable Care Act and pro-abortion rights.

Before Trump nominated her to the appeals court, Barrett had never served as a judge before.

If Barrett gets confirmed, the Supreme Court would have a 6-3 conservative majority, which some say would be the most conservative bench in decades. Ginsburg was considered a liberal voice on the court.

Media ‘part of the problem’

Asked about his time as press secretary at the White House, including criticism that he “misled the press”, Spicer said: “I tried to do the best job I could.”

“There are times I look at tapes from some of the briefings and it might not even be a mistake but I look at them and go, God why did I react that way. I could have been nicer or something like that,” he added.

Spicer’s term as White House press secretary with the media got off to a controversial start when in his first press briefing he falsely claimed that Trump’s inauguration had attracted the biggest crowd ever.

However, Spicer asserted there were “two sides of the coin” and dubbed the media as “part of the problem”.

“There are complete fabrications, mistruths, half stories and definitely slighted and angled media pieces both on broadcast and on the internet and in print that get told everyday,” Spicer told Bilal.

“The media don’t like to talk about their role in this. And that’s the other half of this. Nobody’s perfect … And yet the media as an organisation rarely takes responsibility for their mistakes.

“The media like to act like they are the victim in all of this, and they are part of the problem.”

Spicer resigned from his post as press secretary in July 2017, only six months after his appointment. 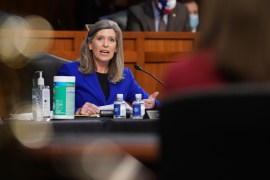 US Supreme Court hearing doubles as campaign stop for Republicans 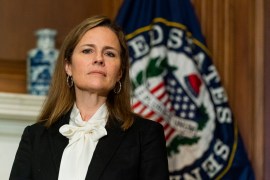 President Donald Trump’s choice for the Supreme Court is well-respected but viewed skeptically by Democrats. 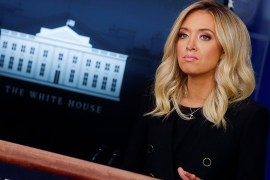