Thousands of Thai anti-government protesters set off on a planned march towards Government House in Bangkok to press their demands for the departure of Prime Minister Prayuth Chan-ocha and a new constitution.

Wednesday’s demonstration is the latest in three months of action that has put the greatest pressure in years on an establishment long dominated by the army and palace.

“Down with dictatorship. Long live democracy,” the marchers chanted as they moved off from Democracy Monument, where they had assembled face to face with thousands of yellow-clad royalist supporters.

Clashes also broke out between pro-democracy protesters and supporters of the Thai monarchy on Wednesday.

It was not clear what started the scuffles but the two sides traded punches and threw plastic bottles as police tried to keep them apart.

Earlier, hundreds of protesters scuffled with police, throwing blue paint at officers, and shouted at the royal motorcade of King Maha Vajiralongkorn after 21 demonstrators were arrested.

Protesters have also called for curbs on the powers of the monarchy, breaking a long-standing taboo against criticising the royal family, which many people still revere.

Royalist leader Buddha Issara said the protesters could demand democracy, but must not call for reforms of the monarchy, as some have done.

“They must not touch on the institution,” he told reporters.

Protesters made a rare direct challenge to the king on Tuesday, chanting at his passing convoy after 21 activists were arrested during scuffles with police. 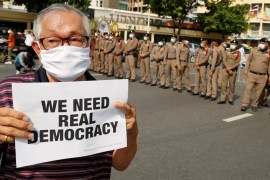 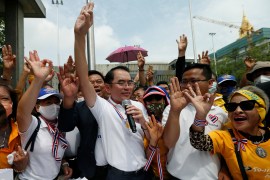 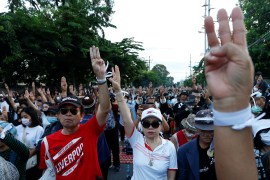