The White House is moving ahead with three sales of advanced weaponry to Taiwan, and has sent notification of the deals to Congress for approval, five sources familiar with the situation told Reuters news agency.

The move in the run-up to the November 3 US presidential election is likely to anger China, which considers Taiwan part of its territory and has not ruled out the use of force to achieve its aims.

Reuters reported in September that as many as seven major weapons systems were making their way through the US export process as the Trump administration ramped up pressure on China.

Asked for a response to Monday’s development, the Chinese embassy urged Washington in an emailed statement to stop arms sales to and military ties with Taiwan, “lest it should gravely harm China-US relations and cross-Strait peace and stability.”

In the emailed statement, an embassy representative said: “China consistently and firmly opposes US arms sales to Taiwan and has firm resolve in upholding its sovereignty and security.”

Leaders of the Senate Foreign Relations and House of Representatives Foreign Affairs committees were notified that three of the planned weapons sales had been approved by the US State Department which oversees Foreign Military Sales, the sources said, speaking on condition of anonymity.

The informal notifications were for a truck-based rocket launcher made by Lockheed Martin Corp called a High Mobility Artillery Rocket System (HIMARS), long-range air-to-ground missiles made by Boeing Co called SLAM-ER, and external sensor pods for F-16 jets that allow the real-time transmission of imagery and data from the aircraft back to ground stations.

Notifications for the sale of other weapons systems, including large, sophisticated aerial drones, land-based Harpoon anti-ship missiles and underwater mines, to deter amphibious landings, have yet to reach Capitol Hill, but these were expected soon, the sources said.

A State Department spokesman said: “As a matter of policy, the United States does not confirm or comment on proposed defence sales or transfers until they are formally notified to Congress.”

The confirmed sale of SLAM-ER, a long-range standoff strike weapon, would represent a step-up from past arms sales to Taiwan which then had a "defensive" emphasis. This might have been inevitable given the widening cross-strait military power asymmetry. https://t.co/d2W5Fq8huD

The US Senate Foreign Relations and House of Representatives Foreign Affairs committees have the right to review, and block, weapons sales under an informal review process before the State Department sends its formal notification to the legislative branch.

Legislators, who are generally supportive of Taiwan and wary of what they perceive as Chinese aggression, were not expected to object to the Taiwan sales.

Taiwan’s representative office in Washington said it had no comment.

News that new arms sales were moving forward came after senior US officials last week repeated calls for Taiwan to increase defence spending and carry out military reforms to make clear to China the risks of attempting to invade. 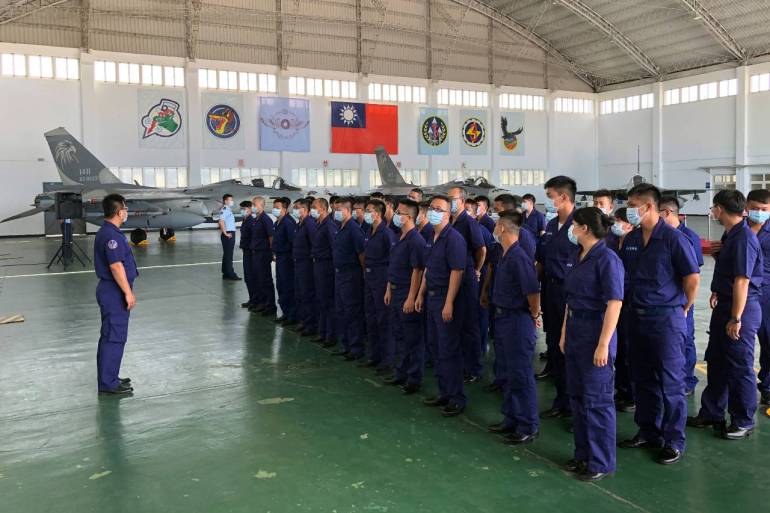 The island has come under increasing pressure from Beijing since Tsai Ing-wen was first elected president in 2016, and manoeuvres have intensified since she was returned to office in a landslide in January. In the past few weeks, China’s planes have sometimes crossing the Taiwan Strait’s sensitive midline that normally serves as an unofficial buffer zone.

On Saturday, in a speech to mark Taiwan’s national day, Tsai said the government would continue to modernise the island’s defence capabilities and enhance its capacity for asymmetric warfare to “deal with military expansion and provocation from the other side of the Taiwan Strait”. Asymmetric warfare is designed to make any Chinese attack difficult and costly, for example with smart mines and portable missiles.

The US is required by law to provide Taiwan with the means to defend itself, but it has not made clear whether it would intervene militarily in the event of a Chinese attack, something that would probably lead to a much broader conflict with Beijing.