The United Nations’ Libya envoy has urged rival Libyan parties to place the national interest before political ambitions when they meet next month for talks aimed at ending nearly 10 years of civil war.

The North African country is dominated by armed groups, riven by local conflicts and divided between two bitterly opposed administrations: a UN-recognised unity government based in Tripoli and an eastern-based rival backed by renegade military commander Khalifa Haftar.

Neighbouring Tunisia is set to host talks in early November, which will include representatives from civil society, tribesmen, political leaders, and members of bodies representing both administrations.

“What we want to see in terms of participation is people who are not there for their own political aspirations, but for their country,” said UN envoy Stephanie Williams on Monday, after meeting Tunisian President Kais Saied.

Asked whether Haftar or unity government chief Fayez al-Sarraj would be present, she said participants would be able to take part on the condition “that they remove themselves from consideration in high government positions”.

This included membership of the key Presidential Council, the prime minister’s job and ministerial posts, she told AFP news agency.

The talks are intended to prepare for national elections, she added. 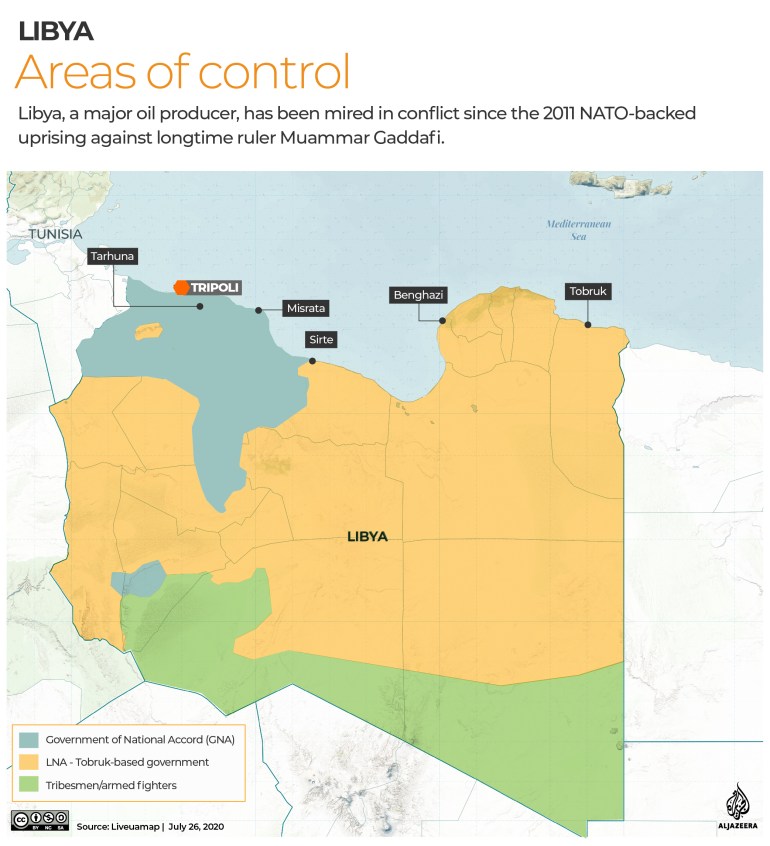 Before November’s meeting, the UN mission in Libya plans to bring together participants for preparatory video conferences, starting on October 26.

Also, face-to-face talks between delegations of a joint military commission made up of five officers from each side are to be held in Geneva starting on October 19.

Recent weeks have witnessed a scurry of diplomatic activity, with Egypt and Morocco hosting talks that saw the Tripoli-based Government of National Accord (GNA) and the eastern House of Representatives (HoR) administration agree on an electoral calendar to organise elections within 18 months and demilitarise the strategic city of Sirte.

Tunisia’s Foreign Minister Othman Jerandi called for “a dialogue between Libyans that could lead to a political solution to the crisis”.

Saied spoke on Monday with his Algerian counterpart Abdelmadjid Tebboune, who saluted the renewed dialogue and said that Algeria, another neighbour of Libya, was “always at Tunisia’s side”.

Tebboune also spoke of a visit to Tunisia after the November 1 referendum on constitutional reform in Algeria.

The Algerian president’s office confirmed that the two men had spoken via telephone.

“The President of the Republic, Abdelmadjid Tebboune, received a telephone call on the part of his counterpart Kais Saied, and they reviewed bilateral relations and his planned visit to Tunisia,” it said in a statement.

Tebboune “welcomed Tunisia’s organisation of inter-Libyan dialogue under the auspices of the UN” the statement said.

A previous agreement between rival Libyan sides, signed in Morocco in 2015, created a unity government that was never recognised by Haftar, a former CIA asset who now wields considerable military influence in Libya.

In April 2019 he launched an offensive to seize Tripoli, but was pushed back after more than a year of fighting.

Since his forces were driven from western Libya, the rival sides have resumed talks on specific themes: institutions, military and political affairs.