Security forces in the Belarusian capital have arrested dozens of protesters and used stun grenades and water cannon to break up crowds demanding a new presidential election.

Belarus has been rocked by street protests and strikes since longtime ruler Alexander Lukashenko was officially declared the winner by a landslide in a disputed August 9 vote. Since then, opposition supporters have been taking to the streets every week to demand that the 65-year-old step down and allow for a new election to be held.

Security forces have detained more than 13,000 people during the post-election crackdown, some of whom were later freed.

In one video, filmed by a reporter for the Nasha Niva independent newspaper, troops appeared to run towards demonstrators while threatening them with guns.

Similar rallies were held in other cities across the country on Sunday.

Police in Minsk said they had detained “several dozen” people.

She said the exact number of detainees would only be released on Monday, while the Viasna rights group, which monitors detentions at political protests, said at least 140 people had been detained in Minsk as well as about 30 in other cities.

Lukashenko, a former collective farm manager who has been in power since 1994, denies his opponents’ accusations that his re-election with 80 percent of the vote was the result of cheating.

His key political rivals are either in jail or have fled abroad.

Sunday’s crackdown followed a meeting Lukashenko held on Saturday in a Minsk jail with detained opposition leaders, an unusual event that prompted some opposition activists to believe he was preparing to make concessions.

The United States, the European Union, the United Kingdom and Canada have imposed sanctions against a string of senior officials in Belarus accused of fraud and human rights abuses in the wake of the election.

Opposition leader Svetlana Tikhanovskaya, who is now based in Lithuania, has called for new elections and for all political prisoners to be freed.

“We will continue to march peacefully and persistently and demand what is ours: new free and transparent elections,” she wrote on her Telegram channel on Sunday. 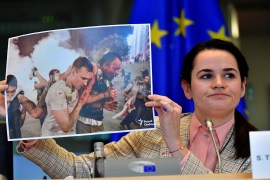 No Belarus sanctions by EU despite Tikhanovskaya plea 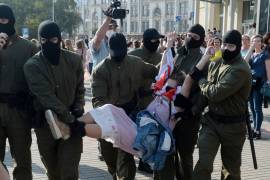 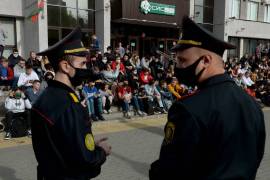 EU had pledged to impose sanctions on Belarus but Cyprus has blocked the move until it also sanctions on Turkey.