The Сentral Asian country has been gripped by unrest since a disputed parliamentary election on October 4, in which establishment parties had claimed a landslide victory. Amid widespread allegations of vote-buying, the poll results were declared invalid by the election commission on Tuesday.

Shortly after, protesters stormed government buildings in the capital and freed Atambayev from prison, where he was serving a lengthy sentence for corruption. Demonstrators said Atambayev survived an assassination attempt on Friday, but the former president was arrested again on Saturday on charges of inciting unrest, according to the State Security Committee.

Later in the day, Jeenbekov’s allies in Parliament appointed 51-year-old Sadyr Zhaparov – who some opposition factions accused of being in league with the president – as prime minister.

It came a day after Jeenbekov instructed troops to re-establish order amid flare-ups of violence, and military checkpoints were put up overnight around Bishkek while personnel carriers patrolled the capital.

The president, who said he was prepared to step down should a new government be formed, also sacked top security council officials who had either supported his opponents or failed to intervene when the opposition said on Tuesday it was seizing power.

On Saturday night, the capital was calm as a state of emergency incorporating a ban on public rallies and a curfew took effect.

Reporting from Bishkek, Al Jazeera’s Charles Stratford said “law and order seemed to be returning” after days of turmoil, including clashes between rival protest groups.

More than 1,200 people have been injured and one person has been killed, according to health ministry figures, in clashes that erupted on Monday following Monday’s election.

With the parliament building ransacked by protesters, politicians gathered on Saturday in the presidential residence on the outskirts of Bishkek to vote in Zhaparov.

He previously served as adviser to another former president, Kurmanbek Bakiyev, who was succeeded by Atambayev in 2011.

Atambayev is Jeenbekov’s former patron and now his arch-enemy. Among others detained on Saturday was Kursan Asanov, former deputy interior minister who had assumed leadership of the ministry when the unrest began.

Prior to his appointment as prime minister, Zhaparov called for constitutional reforms before fresh presidential and parliamentary elections.

He told Parliament Jeenbekov had reaffirmed to him his intention to resign once a new cabinet was approved.

Zhaparov’s supporters had clashed on Friday with followers of a few other parties which nominated their own candidate for prime minister, Omurbek Babanov.

Kyrgyzstan’s opposition is divided between 11 parties that represent clan interests. Two of its presidents have been toppled by popular revolts since 2005. 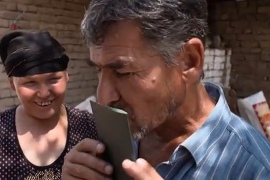 Without a legal trace: Eradicating statelessness in Kyrgyzstan

Meet some of the thousands left stateless after the Soviet Union’s dissolution, and those who are working to help them. 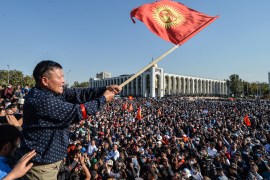 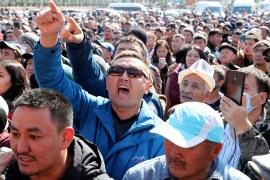 After gov’t stepped down, people in the capital Bishkek clash while divisions grow between opposition factions.