Police in India have filed a case against a left-wing student leader and 19 others for vandalising a server room on the Jawaharlal Nehru University (JNU) campus on Saturday, but have yet to make any arrest into Sunday night’s brutal mob attack in which dozens of students and teachers were injured.

JNU Students Union President Aishe Ghosh, who was attacked by masked assailants on Sunday night, was named in the first information report (FIR or police complaint) of the Delhi police on Tuesday.

Ghosh was among at least 31 other students injured on Sunday when the mob of about 50 masked people raided the New Delhi-based university, attacking students and teachers with iron rods, sticks and sledgehammer and vandalising property.

This is outrageous. Aishe Ghosh herself has been a victim of murderous act and you are filing an FIR against the victim

“Aishe [Ghosh] herself has been a victim of murderous act and you are filing an FIR against the victim, whereas in the presence of Delhi police a whole hoard of assailants armed to the deep, walked out of the campus, battered on the back the police and they didn’t arrest anyone,” she told Al Jazeera.

The JNU Teachers Association, which has sought vice chancellor’s dismissal, also questioned the logic behind the FIR.

“It seems to be very clear that they want to escape from responsibilities on what has happened during the mob violence,” Surajit Mazumdar, the secretary of JNU Teachers Association, told Al Jazeera.

“I can’t see any other purpose behind his. I don’t understand on what basis and evidence are they, otherwise, filing an FIR against the JNU Students’ [Union] president who was badly injured.”

At a news conference on Monday, Ghosh blamed the Akhil Bharatiya Vidyarthi Parishad (ABVP) for the violence that has caused outrage and triggered nationwide protests. ABVP is a student group affiliated to the Rashtriya Swayamsevak Sangh (RSS) – the ideological parent of the ruling Bharatiya Janata Party (BJP).

“It was an organised attack. They were singling out people and attacking. There is a clear nexus of JNU administration, security police and the ABVP vandals. They did not intervene to stop violence,” Ghosh was quoted as saying by the indianexpress.com website.

Witnesses had earlier told Al Jazeera the attacks on Sunday were carried out by ABVP members, a charge the right-wing student outfit has denied. The RSS-affiliated group instead blamed left-wing leaders for attacking its members.

Scores of riot police on Monday patrolled the university – the alma mater of several key ministers in Prime Minister Narendra Modi’s cabinet – picking their way past the shattered glass and broken doors and furniture.

Police made no immediate arrests, but blamed the violence on “rival student groups”. On Monday, it filed a case against unidentified people on charges of rioting and damaging property.

Human Rights Watch (HRW) in a statement published on Tuesday accused the police of failing to protect students.

The police has faced criticism for handling of the situation, with videos shared on social media showing the police allowing the assailants to leave the campus.

“Students and teachers begged the police to intervene during the attack at Jawaharlal Nehru University, but the police simply stood and watched the attackers walk away,” Meenakshi Ganguly, HRW South Asia director, said in a statement.

Police have also been accused of brutalities against students at Jamia Millia Islamia University and Aligarh Muslim University for protesting against a new citizenship law passed in December.

“All too often police in India use excessive force and arbitrarily arrest peaceful critics of the government, but are derelict in their duty to maintain law and order when violent ruling party supporters are involved,” Ganguly said.

Despite repeated attempts, the Delhi police could not be reached for comments.

As condemnation of the attacks spread, more than 1,000 people held a vigil in Mumbai, India’s financial capital. Demonstrations were also held in Bengaluru, Kolkata and other major cities.

Nobel Prize winner for economic sciences, Abhijit Banerjee, a former JNU student, said the attacks had “echoes of the years when Germany was moving towards Nazi rule”.

The BJP denied claims by the opposition Congress party that it was responsible, and in turn blamed left-leaning student groups which dominate the JNU politics.

The government has promised an investigation, while Home Minister Amit Shah – a close Modi aide – told university administrators and police to maintain order at the campus, which has been tense since protests in November over fee increases.

The unrest comes as nationwide protests continue against the citizenship law that bars Muslims belonging to three neighbouring countries from getting citizenship.

Hundreds of thousands of people have taken to the streets across the country, and more than 25 people have been killed.

Meanwhile, India’s leading trade unions have called for a general strike on Wednesday to protest against the government’s “anti-people” policies. 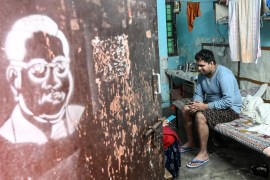 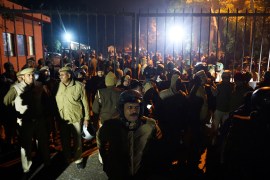 Up to 30 students, teachers wounded after a mob of about 50 attacked elite university in New Delhi.